Right then, coffee mug is full so life is good etc etc.

In fact, as i look outside the clouds are beginning to break up and there’s some blue sky out there so it’ll soon be time for ‘walkies’.

While i was making my coffee just now i noticed that the postie had dropped another blue package in the porch so i quickly grabbed all of the new kit that i haven’t covered yet and got a couple of photographs as a teaser. That’s the sleep quilt, one of the new mats, the new tent (pack is tiny !) , the guidebooks and the general area map.

So, the LCHF/Keto diet approach plus or minus IF.
At 7 months in i would say that this has been a huge success so far and that i now think that this approach is fully consistent with the physiological science and definitely not some kind of fad, which sadly so much of the world of ‘diet’ is. In my own experience and unlke CICO style approaches i really have lost a lot of body fat while maintaining lean mass, that i lost that weight rapidly and consistently and at this point it’s staying off : that’s very unlike the last time i tried a ‘diet’ , lost weight for a while and ended up much heavier than i started out.

I think now that there are several distinct stages that i went through and which are the same as other people have experienced so i’ll quickly run through mine.

1. Induction and diuretic phase. In the first week i started off very simply, not really knowing what to do exactly , all that i did was largely cut out as much sugar and processed carbohydrate food sources from my diet. Thus out went the usual cakes, biscuits, bread, pasta and such like. Because i didn’t really know what to eat i did end up eating lots of eggs and bacon…or bacon and eggs…or a bacon omelette with cheese !…that or that i seemed to be getting through whole cooked chickens at an alarming rate !.

I did feel a bit rough at times but mainly in that my sleep pattern fell apart just for that first week. I did get mild headaches and i did get ‘keto’ mouth and keto-breath. That’s the distinct flat and metallic taste that comes with the body metabolising fat and producing ketones to use as fuel. I call this the induction phase because it’s the onset of dietary ketosis and the most importantly crucial thing to have happen.

Some time during week 1 i started to go into diuresis, that’s just a technical term to say that i pee’d a lot, in fact at one point i would dump a bladder load and feel full again within the hour. Had i thought about it i would have done a simple measurement of water balance, i didn’t so i don’t know how much water i lost but i suspect it was several litres. I didn’t even weigh myself until about half way through the diueretic phase either so i don’t know what my starting weight actually was but when i graphed it i back-estimate around 103 Kg starting weight.

The diueretic phase is a common experience and people who are very overweight report an often stunning loss of weight at that point but it’s well to remember that this is almost all water….part of why i didn’t weigh until that phase was ending and when i did i recorded a ‘dry’ starting weight of 99.8 Kg. (call it 100 Kg for short)

2. Steady state weight loss and ketosis.
Phase 2 for me lasted about 15-16 weeks and during that whole time my weight loss was almost a straight line on the graph at exactly 1 Kg a week. I don’t know of any reason why it was that but i have since found that for many men that’s pretty close to their own experience with the modification that the greater the level of obesity/overweight then the faster the loss .

Diet…during phase 2. I gradually sorted out what and how i was eating during this longer phase. I know that i started making much better meals and spent a lot more time over preparing ‘real’ food. I was certainly eating a lot more real food and i count that as being meat, fish, eggs, salads and vegetables, quite a bit of butter, cheese and cream. I never once thought about calories or dietary ‘macro’s’ : rather i just made sure to have good food/satisfying meals and not to eat how i used to. I did still have sweet treats and i need to talk about that later on.

At some time during those 15 weeks i accidentally started doing intermittent fasting (IF) just by tending to have a later breakfast…i was simply not feeling hungry in the morning and found it better to do my training and just get more stuff done in the morning before i ate my breakfast. IF has become a more regular way in which we mainly eat today in that when i have 2 or 3 meals in a day it’s usually within an 8 hour eating window.

It was also during the first few weeks of this long phase that my hypertension spontaneously reverted to normal and when i stopped getting arthritic pain , notably the new pain i’d been getting in my hands. Although highly subjective i noticed that my energy levels went through the roof and that i was running around looking for work to do. Most of that happened during the so-called lockdown and you have to realise that i was blowing a big hole right through the ‘rules’ with at least 2 walks a day…having said that i still think that ‘rule’ was utter BS and actually harmful so i knowingly took a stance of civil disobedience. Luckily i did also still have my basic weights set up at home so i combined free weights training with calisthenics and my walking programme.

At around 16 weeks i was down to around 85 Kg, clearly a lot leaner as i’d gone from about a 43′ waist to 37′ and thus normalised my waist/hip ratio…no longer officially obese !.

Phase 3, plateau.
From about 16 weeks my actual weight loss completely stopped and in fact bounced around for a few weeks although i was still getting leaner…not so much a changing waist measurement but a visual impression that things like my arm veins were becoming more prominent and that my fat folds were becoming thinner skin folds.

Today i still don’t fully understand the total plateau phase given that my diet and exercise were consistent, if not quite a lot better : i was doing longer hikes and better training sessions coupled with eating around training. Part of what i think was happening with me at that stage is that i was losing fat but i was also clearly putting on muscle as my quads, calves and biceps all bulked out and became defined/blocky again.

I get a hint that it is possible to be getting some degree of metabolic slowdown…where the BMR simply drops to match the caloric intake. Some sources do state that to be the case and that then it becomes a lot harder to continue losing weight. One of my friends in the keto group seems to have accidentally hit metabolic and workload parity but i note that she has chosen to think ‘calories’ while i don’t.

I now think of this as partially ‘mixed messages’ and simple mistakes in that my training and eating pattern was strongly anabolic…i should be putting on lean weight with free weights and post training feeding…and secondly that i had dropped back into snacking a bit too much and allowing sweet ‘treats’ back into my diet.

As i said earlier, having never taken a set of body composition numbers right at the start i will never know what my overall fat percentage and lean mass actually was, nor do i have a set of reference pictures to demonstrate my progress. In simple weight numbers i’m now down by some 16 Kg (35 lbs) but i’m pretty sure that iv’e lost a lot more fat than that and regained the same in muscle weight. 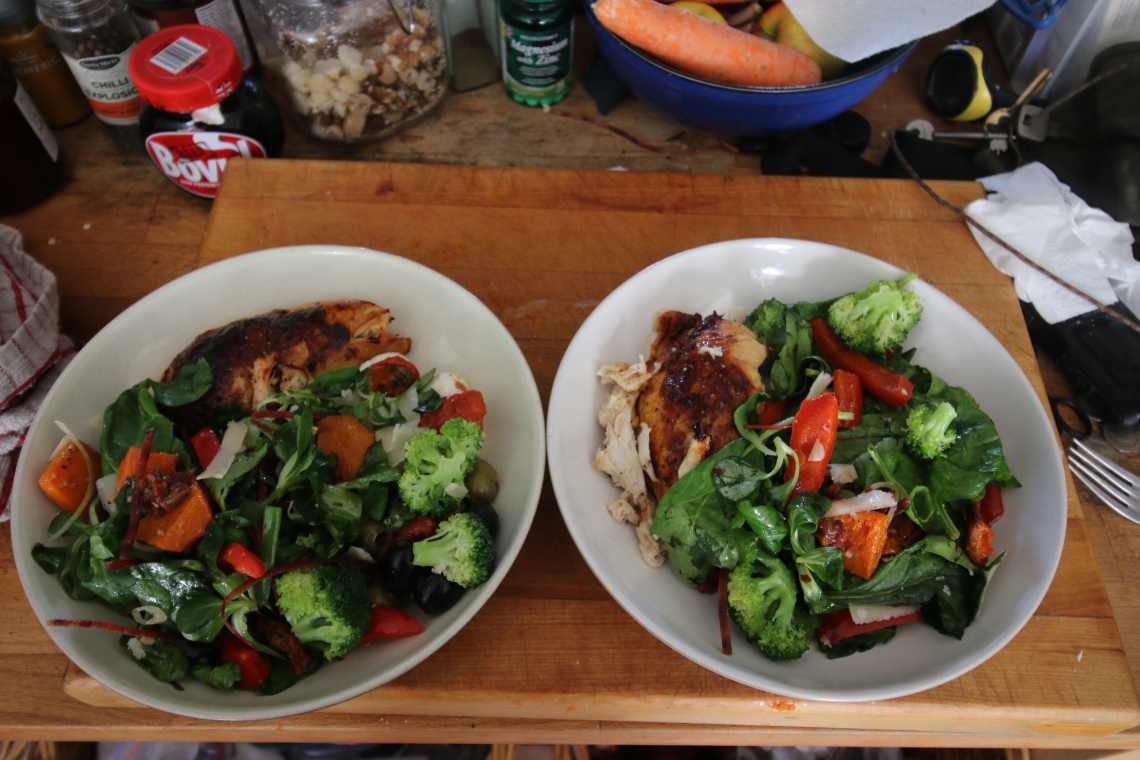