Its the end of week 6 of my food and fitness effort, today i am having a half day off this morning to let the various aches, pains and swellings settle down a bit.  I am also at least halfway through a 24 hr fast : i won’t eat now until the end of the day and 24 hrs since i last had a solid meal.    I did get through week 6 without a complete craving breakdown and without doing an armed hold-up of costa coffee and demanding every one of their cakes on a plate RIGHT NOW ! : so that’s a success !.

Yesterday i took the heavy carry count up to 35 so far, i weighed yesterdays last carry and that came in at 41kg which is a decent weight to carry even over a short distance ,the ‘mental’ part came in while i was packing and picking up one of the loads : i was loading up a heavy round when a local kid who i think of as ‘rude kid’ did the whole “what you doing mister” and i answered that the load carrying is a form of training that i do. Of course he answered in usual ‘rude kid’ style with “you’re mental you are mister”….which i thought was quite funny.  Anyway at 35 carries so far that is somewhat over two and a half thousand pounds of new firewood (wet) seasoning in the wood-shed, that will sit there all this year until i get around to splitting and cutting it down.  I used to do that with axes, wedges and a maul hammer but i can see a hydraulic splitter going on the wish-list as Alan suggests.

Week 6 then briefly : body weight sitting around 97.2 kg at end of play and my belt now comfortable at 2 notches in but i note that my weight is bouncing around a lot during the week : i can only assume that’s to do with water retention and cortsisol.  This weeks exercise went quite well with 3 good workouts in which i alternated heavy carries with weights work on the deck : yesterday for example i did one carry and then one set of deadlifts so we can safely call that a ‘back’ day.  What still didn’t happen was an early morning workout before my shift , instead i arrived at work early with only a short walk under my belt and feeling a bit self-frustrated at that so instead of sitting around drinking coffee and reading i set myself a goal that day to crank out 100 press-ups, didn’t quite make it but got 75 which is a record for me so far. Squats still don’t work at all due to the lack of stable range in my knees but the physio wants me to do partial slow squats at body weight with a slow eccentric phase so i will be working on that.

This week i am introducing another new exercise back into the mix, this week it will be pull-ups : i have bought a pull-up bar but i’m re-thinking where to put it and might just make a climbers version of a pull-up board instead for the original planned location. Now obviously pulls will be hard at this stage because i am still very heavy and have never been strong in that plane : equally i have hugely long levers (very long limbed) such that i have to heave my weight through a long distance. Ideally i would improvise some sort of lats deck here but even a couple of pulls a time is a start. Intersestingly i ws listening to Jocko Willink talking about priorities for a home gym here :

As i happens i already have an olympic bar and some plates but don’t have a good place to attach a pull-up bar to a solid wall. The bar is going to have to attach to the utility area roof beam which is an awkward position and a simple climbers version might work better : anyway that’s todays project to work one out, for now the drill will be a pull or 2 every time i walk past my front garden’s pergola !.

Ok boats : lets get to the interesting stuff.

I’m pretty sure that i am going to experiment with small sailing boats at least for a while, at this stage my plan is to get a boat and get set up towards the end of this summer and get a couple of sails in just to test the basic ideas of moving, launching and actually sailing a dinghy. That will almost certainly mean laying-up the Liberty for now and then if the idea works selling the Liberty and putting that money aside for the next project. 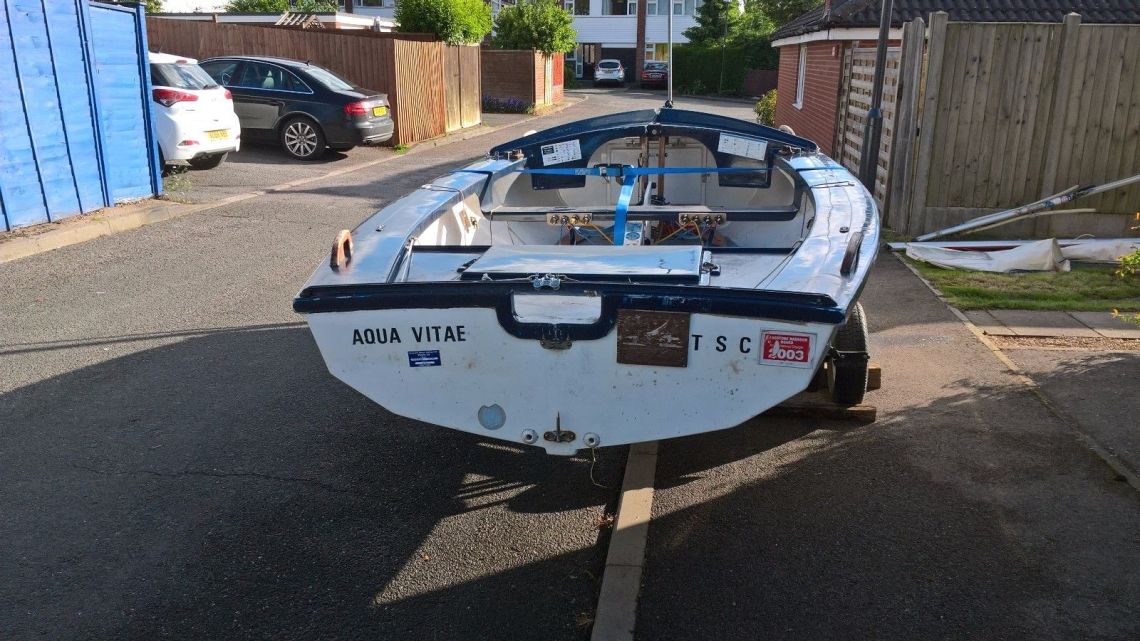 My decision making so far got me to the point of accepting that while i might think that the Wayfarer dinghy is worthy but boring its still a good place to start in that there are usually lots of them around, they aren’t expensive boats and they do seem to do what it says on the tin.  This week then i watched one on ebay and bid seriously on it but got outbid in the last 5 seconds : just didn’t have the time to respond with another bid.  Having read around the subject i can see that the boat i need is the mark 1 or mark 1 composite boat as they have certain features that make them better as a cruising boat. Right now there are loads of mark 2 boats around which don’t work as well and suddenly a dearth of mark 1’s !.   I think i would much rather have the Devon Yawl which certainly has the better pedigree for a local sea boat and they have a ballasted centreboard and some internal ballast too.    Where the Wayfarer was designed as a ‘modern’ racing and general purpose dinghy the Devon Yawl is based on a half-decked fishing boat that originally worked out of Salcombe and that is a place that has some unique problems for small sailing craft…..namely a tight river, a serious bar and straight out onto a bold coast with decent waves and currents to contend with. The boat as a sailing and fishing boat had to be powerful enough and stable enough to sail out over the tidal bar and then steady enough for the fisherman to work from. By some accounts the fishing rig is the jib and mizzen and the layout also gives a longer working cockpit. Long term i think that’s the kind of boat that i would really prefer even though the Wayfarer might also have some more useful features : the boat is certainly lighter for example and maybe has more laying down room on the sole (for boat camping) and would be easier on launching and recovery.   A lot of this basic practical stuff i just won’t know until i dip a toe in the water though.   At the moment the main problem is that the only boat on the market is at least 8 hours drive from here : that would mean 2 trips, one to go look-see and another to collect if it was good to go.

Good looking boat though : and you know that sailors say “if it looks right it probably is” 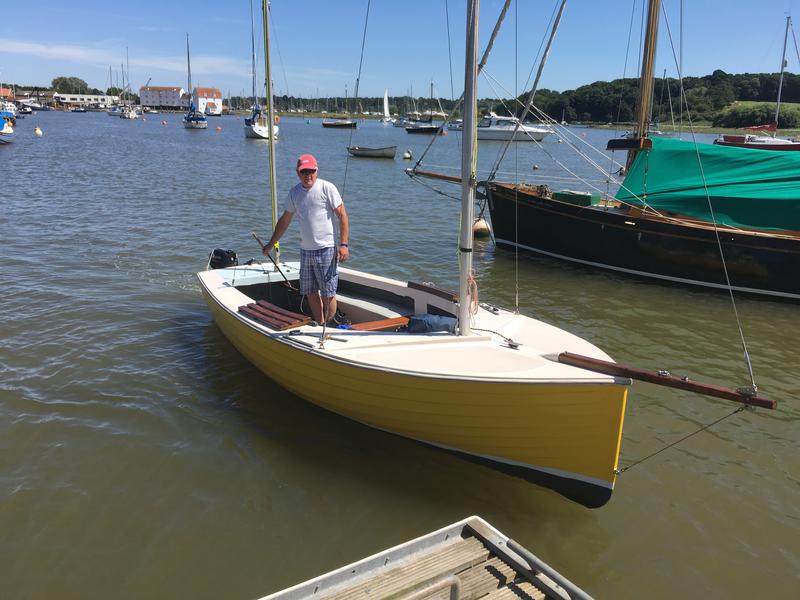 Long-long term i think its more likely that i spend time working out what features i really want in a boat like this and then finding the nearest hull shape and rig combination : the Francois Vivier boats for example seem derived from similarly tough working boats and i think the Ilur or similar is still a strong contender but given that i want the internal space for 2 of us to be able to stretch out on the sole it might need to be a slightly longer and wider boat and maybe ballasted to some extent and that changes the trailing and launching problem as it does with the DY….with the Yawl’s extra wight in the board and ballast i can’t see myself hauling one up a muddy slip by hand on a launching trolley so that means a wet-launch off its trailer.

And yes i did nearly have a rush of shit to the brain and came very close to bidding on the Merlin rocket with my plan of turning one into a small fast fun boat. I suspect that the class association would have put a price on my head had i converted this pretty example into a fast modern lugger similar to the similar National 18 which works a treat. 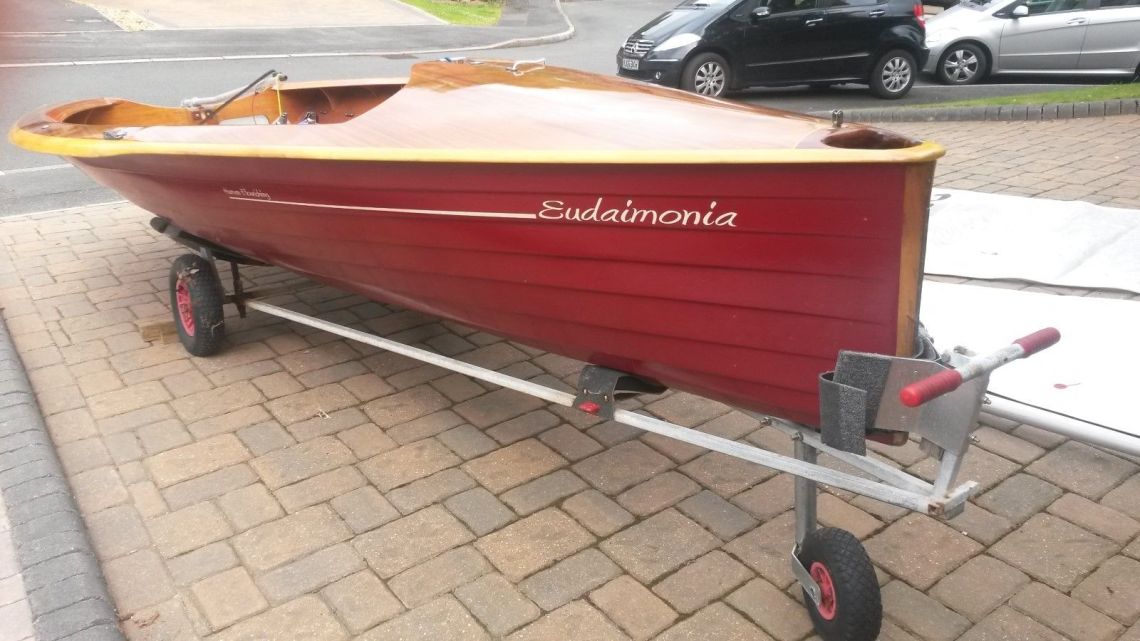 Stephen Mundane wrote :  “Bad luck on missing out on the Wayfarer but I’m sure you’ll time will come. Congratulations on not holding-up the Costa and your fitness/weight loss achievements — makes me tired just reading about them! Oh well, back to the Philosophy book (I’m rereading the first chapter as it really isn’t that simple 😉

Me : getting in touch with the DY owner to see if i can get some more pictures and maybe make most of a decision at a distance.  Tough day to have a fast as its usually a sunday when i go out for a coffee and cake treat….all i can taste right now is that metallic ketosis.