F. Is for Folkboat.

F. Is for that Kiwi bloke ; can’t think of his name right now !

Forty years ago i went and fell in love with my first boat : a very bad example of an east German Folkboat that had lovely lines, a varnished hul, a monstrosity of a cabin roof and just about every frame was cracked or broken.  Aside from that it had a very dodgy petrol engine that only ran one one tack when it ran at all and it needed far more work than i was capable of doing.     The Folkboat bug bit hard though and iv’e had a soft spot for them ever since…..i don’t even like to think about the one that’s been sat in the yard for 5 years while it’s owner pretends to work on it.

The story of the Folkboat is so well known that i don’t intend to say much more than it’s designer , Tord Sunden, basically put the design together from the results of a design competition in 1942 ; one of the unique parts of the history is that the design was given to British builders to build for free in the post war period.  According to some sites there are more than 4,000 Nordic Folkboats built…..so many that they were once derided as ‘the vermin of the Baltic’ and then there are hundreds of similar boats deriving from the original design : thus we get the International Folkboat, the Folkdancer, Folksong, Contessa 26 and so on.

These are all great sea-boats and many of them have done some serious long distance sailing which is of course my usual segue into big voyages done by small boats so , as usual, let’s go and shamelessly borrow some information from the Folkboat Wiki page :

“In the 1950s, the Folkboat began to attract the attention of long-distance voyagers for its modest cost and seaworthiness.

Blog time : as i write this post it’s early February 2020 and iv’e just received an invitation to a reunion to celebrate the finish of one of the 2 boats i sailed in the 89/90 Whitbread race so i guess that 30 years ago i was at sea : i think we were deep in the Southern ocean and heading for the Horn.  A month or so later and i was back at sea on my second Whitbread boat, once again standing in for the medic and busily splicing big wire and rope sheets back together….scary stuff handling maxi sails with wire sheets !.

I remember one quiet day at sea later on, i think when we were reaching up the coast off the Bahamas in easy conditions and there wasn’t much to do except sit the boat out : i was talking to Sam, one of my crew mates about the first boats we’d owned and sailed and of course about the boats we would like to own.  Sam’s first boat, owned with his brother was an Achilles 24 which is a boat iv’e mentioned several times on the blog and is now the boat i would chose over a Folkboat because the triple keeled version would fit the bill for what i do now….especially being able to dry out, and although it’s a small boat it would be live-able with.

My fantasy boat back then was the Chuck Paine designed Frances 26 which i’d only seen pictures of but which, for some reason, i absolutely associated with the Caribbean and the Bahamas…..don’t ask me why, maybe i’d seen a picture of one of the early Farnces’s there.

I didn’t think much about the Frances 26 for another few years ; mainly because i spent most of that time at sea but primarily because i was broke.  When i did return to ‘normal’ life it was the drive to one day own a Frances myself and disappear off cruising for a while that kept me going.  For a while i even had my ‘advent card’ of the picture of a Frances under cut-outs, one of which i would open when i’d saved up another chunk of cash towards buying one.

Well, other things got in the way and i had other, cheaper boats and then about 10 years ago i threw everything i had into buying a secondhand Frances 26 and doing a long refit with the same intention : taking early retirement from my NHS job and going cruising.    My own Frances, the second WABI, had one refit and then a second one when she tried to sink on her winter mooring, and that second refit had to include a new engine and all new electrics ; which is when i learnt how to align and engine and build 12 volt electrics. 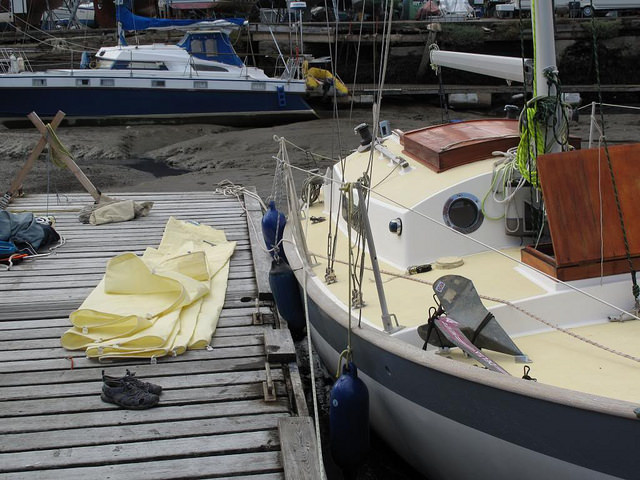 The short story is that i took my early retirement and almost immediately sailed for France aboard WABI” and as with this year initially fetched up, somewhat tired and fuzzy in L’Aber-Wrach very late one night…i got a bit confused going in but sorted it out with extra coffee and a better look at the chart !.    The Frances became my home for a while and what a comfortable small boat she was….mine was the open plan version with the working space directly under the short coachroof : in port we tended to live up forward but we also had the advantage of 2 proper sea berths aft.  I learnt a lot about solo seamanship with WABI” and i genuinely believe that i could have taken that boat across the Atlantic and down into the Pacific ; but that didn’t happen, mainly because we bought a cottage and i sold the boat.

In retrospect WABI” was a beautiful mistake, a superb small cruising boat for a single person or a couple : but….she was a very expensive project to get to the stage i did and ultimately not worth the huge effort i put into her.  Looking back, i know now that i could have got a lot more boat for my budget and/or left sooner and stayed out a lot longer in the voyage i did make in her.  Now i would have much less of my available funds invested in the boat an far more of it in the cruising fund ; having said that i would also say that i hugely enjoyed owning the Frances and living aboard her.

Home is the boat : Frances 26 WABI” near the end of her refit.

When i started sailing and i got involved with the local offshore sailors one of my friends suggested that the way to get lots of experience was to sail with different skippers and on as wide a variety of boats as possible ; and also that one way of getting those rides was to have a sea-bag packed and ready to go for a Friday night call from a skipper needing crew.   It seemed a strange way to go about things but it did give me a lot of races and more usefully ; delivery trips to and from races and some of those were long distance trips for a newbie sailor.

One of those early Friday evening calls was to get my arse over to Holyhead and join the crew of the ‘Septic Seagull’ , otherwise known more properly as ‘Prospect of Puffin’ which had been the local ‘hot’ boat until the IOR rule changed enough to make it less competitive.      ‘Prospect’ of course had been designed by ‘that Kiwi bloke’…..a certain Bruce Farr who had blown a big hole through the IOR rule with his radical, for their time, light and wide, fractional rigged designs.   Prospect was designed to the old one ton rule but was very unlike any other one tonner of the day.   By the time i got to sail on her she was pretty tired and the newer designs could outsail her because most of them had been tweaked to the changing rule.  One thing i remember was seeing P of P alongside other one tonners at the one ton world championships in Cork and thinking how small Prospect’s rig was compared to the newer designs.

Still, i never raced on P of P much but i did get a lot of miles on her taking her from port to port ; once i remember taking her all the way down the Irish sea and along to Cowes for a Fastnet race and i think the same year i got the call again to help crew her back home to Holyhead…..that trip was memorable because we had about a force 6-7 up the Irish sea, we carried a spinnaker and surfed/planed past South stack lighthouse on the last day.

Correct me if i am wrong but i really don’t associate Bruce Farr with small boat design ; especially small cruising boat design : in NZ  few years back i did consider chartering a boat for a few days sailing and i think that was around 25 feet but it had a very emasculated rig.

What i really associate Bruce Farr with is the boat i crewed on in the 89-90 Whitbread race……and why that comes to mind is that iv’e just been invited to the 30 year anniversary of one boat’s finish.    The second boat that i sailed on in that race was an older Farr design ; previously Atlantic Privateer….but once again that she was a very tired and run down boat and massively outclassed by the big Farr ketches ; Steinie and F&P.     By a strange coincidence i found F&P at anchor off Kingsand last year , just as i was finishing my autumn cruise.   I came up alongside her and had a short chat with one of the crew who admitted that he hadn’t even born at the time of the 89-90 race…..how time slips by eh ?