From Cape Cutter to Comanche.

Blog time : early January 2020, the brief spell of dry and cold weather has passed and it’s back to the usual mildly cold but very wet winters we have down here in the south-west of England.  I can’t carry on with the drain work out back because the drain pit has flooded again and i definitely can’t do the cement work.  This morning we hit the builders merchant with a big (by my standards) order for the posts, rails and decks for my workshop storage : after that it’s home, coffee and a long writing session.

Iv’e been thinking a lot about boat designs recently for a couple of reasons : firstly that iv’e been discussing Jim Young’s ‘Rocket’ design with my mate Al down in NZ and he’s been getting me up to speed on modern shapes and rig proportions.  By chance i watched the Sydney Hobart start and then by accident i was online for the live feed from the finish as the super-maxi ‘Comanche’ ghosted up to the finish line.  To me Comanche looked freaky with that ultra wide stern, chines and a rig almost back in the cockpit and Al says that’s the way race boat design has gone.   Secondly iv’e been fantasising what i will build when i win the lottery…..and in the real world thinking about the smaller boat i would actually like to build for my next major sailing project.

The work i am doing right now in the workshop, and the reason for my big materials order, is to completely clear one side of the workshop such that i can have as large a work space as i can on that side ; enough perhaps to build a small boat in there with maybe a temporary extension at the door end.  In this post i’m not going to talk about the actual boat and design that i’m thinking of building this coming winter as i haven’t quite nailed down the specific boat that i want although i am down to a couple of contenders.

What iv’e always wanted to do with my website is to feature boat designers that have made their mark with small boat designs, dinghy’s, dayboats and smaller cruising boats : i recently re-posted my ‘Boxfather’ blog post (Phil Bolger) and had a sudden rush of something to the brain that i should work through the alphabet, my problem being that the two designers that i’m looking at are right down at the far end : Francois Vivier and John Welsford !.    I would love to start with the late Ed Burnett’s work although his main body of work was with medium to large traditional cruising boats and as much as i admire his work i wouldn’t want one myself…..except definitely his collaboration with Nigel Irens and the ‘Roxanne’ design which would be a perfect fit for what i do. 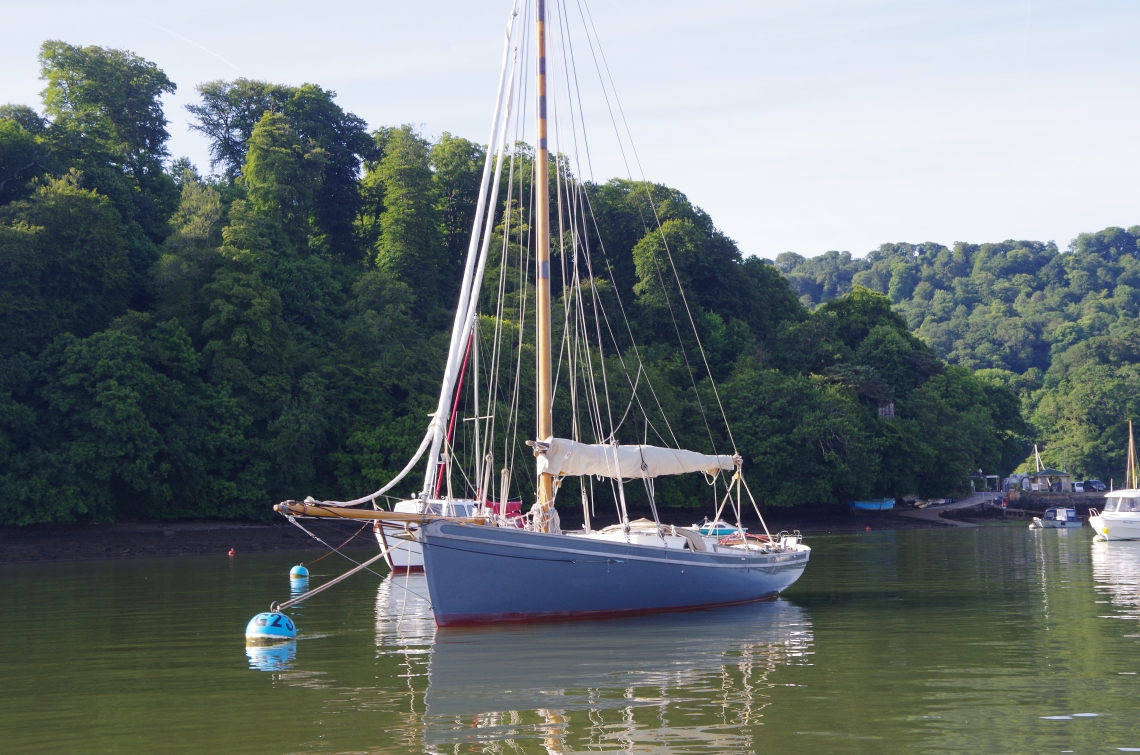 For a big and husky offshore/ocean cruising boat i would love something that looked like Nomad except that she is a deep draft yacht and one of my primary requirements is to be able to sail in shallow water, access the rivers and creeks that you see in my cruising posts and then dry out level on the mud or sand.    Iv’e talked about my design requirements in small boats before, the kind of boats that my budget will allow and just to re-iterate : low budget, shallow draft or variable draft, ability to sail offshore in moderate conditions, dry out easily, basic comfort for one or two people.

When i think about a ‘blue sky’ project and if you will, my ‘ideal’ boat, the same parameters apply except that the budget goes out the window !.  It’s a kind of fantasy exercise but fun all the same except that this year i’m collaborating with my mate Big Al down in New Zealand who is also working on his own ideal boat project and our two very different end points come out within a foot of each other.  They are very different boats and while mine is still based on my stated parameters, his are nearly all about cruising speed and windward ability but with a lot of practical considerations thrown in : this year i intend to do a whole series of posts about his project and how it compares with my own thoughts.

Roger Martin Presto Sharpie….current fantasy boat !, like a Liberty with muscles and attitude.

While i’m here though i would like to take a look around the ‘D’ in the D. is for Design because a couple of Dudley Dix’s designs are ones that have inspired me and one of them became a close candidate for ‘the’ boat……and i like a lot of his designs !

Two years ago i wintered in the Exe at Topsham and i really enjoyed my time there in both the river and the village ; the river is shallow and tidal, just perfect for WABI”’ and Trout’s at Topsham really helped me out and kept an eye on the boat.  In the summer that year i was cruising in the estuary one time when i decided to dry out on the Bull sand which is right in the middle of the river, and go for a walk over as far as i could at low water to Exmouth.    It’s absolutely the kind of thing i like to do with WABI”’ and kind-of demonstrates what i need out of a boat ; shallow draft and the ability to dry out level.

Anyway, later that day i was back on a mooring when this little red gaffer came beating down the river against the last of the flood tide.  I’d seen the boat a couple of times on it’s mooring up by Starcross and recognised it as one of Dudley Dix’s designs : i’m not sure if it’s the Cape Cutter design at 21′ or the smaller Cape Henry at 19′.  Thinking back….i definitely had an impromptu race against a Cape Cutter in the Hamoaze one time in my Frances 26 and even with a very fresh and smooth bottom and brand new sails the Cape Cutter out-tacked me up that river….mainly by being able to tack quicker and get moving better after the tack.  If anything the Dudley Dix design reminds me of the Cornish Shrimper only a bit more modern and with a more powerful rig. 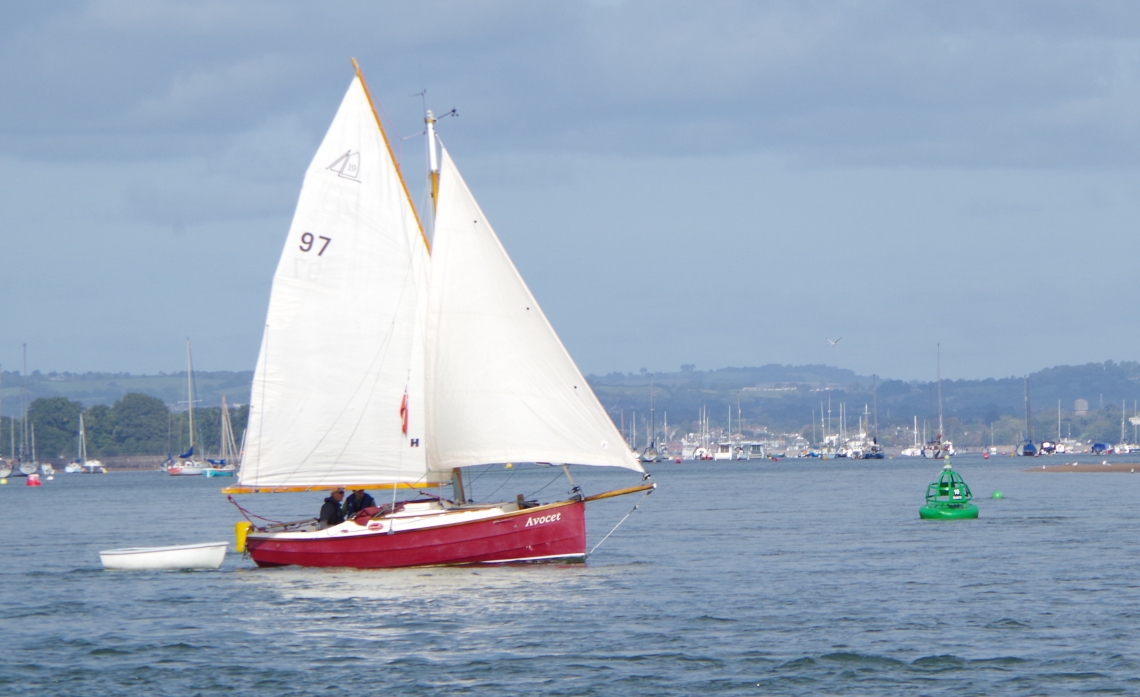 The larger of the 2 designs is definitely one that would have done the same job as WABI”’ has done for me over the last few years and would be a perfect fit in my home river as being very shoal draft with her board and rudder up ; once again i just like the look of the boats.  I borrowed this image below from the Dix designs website and i can only apologise that i don’t have any interior photographs.   Of interest i note that there is an active owners group and one of these boats was filmed in the ‘Classic boats’ series ; link at the bottom of the page.

For this post i took another look at Dudley Dix designs website to see if there was anything else in a similar vein to the two ‘Cape’ designs and there is another one ; the Cape May design at 25 feet which is very similar, just larger, and then a ‘Cape Charles at 32 feet which i have excluded because it has a shallow fin keel.

Earlier on in the post i mentioned my mate Al and his requirements for a boat ; that performance comes very high on his list and that he’s prepared to work around that. Interestingly Alan also wants to have less draft than the original design and a rig that’s not only going to get moved (from the original) but also needs to be drop-able easily.      In contrast i ask for ‘enough’ performance , i like to get the best out of my boats and iv’e talked about the practice of doing that with small boats and i certainly wouldn’t want a total dog : the little Liberty isn’t a fast or powerful boat but it does embarrass other larger boats in light conditions.  Along the way i did look at some higher performance lifting keel boats that were just about in my budget, went to see one of them which i didn’t like and then wasn’t able to go and see the next two which might have been better boats for me.  For the record the one boat i did visit was a Dehler 25 and the two that i missed out on were the Evolution 25 and the Parker Super-Seal at 26 feet.

At the same time i did a similar exercise to see if there was a small, high performance boat that had more space than the Liberty, a lot more speed , that would sit on a soft bottom and that looked right…at least to me.

What i found was this….which made me very moist indeed.   This is Dudley Dix’s ‘Retro 29’ design which i think is based on his earlier radius chine sport boat which was slightly shorter and had a more ‘modern’ look.  This certainly looks quick , and with that bulb lifting keel looks both powerful and beach-able…..i’m not sure about the rudder arrangement on this one as that definitely needs to lift and lower easily : but what a great looking concept.  Just so that you know there are several rig options, from a very modern square-top , one high peaked gunter and one gaff but each comes with a bowsprit and the chance to fly some decent canvas offwind.  The one below is the racier version with a short coachroof….there is a longer coachroof version with a double bunk under the bridge deck which would be neat.