Some of you sharp eyed followers might have noticed that you have had the beginning of a series about first aid and boat medicine and not much about actual sailing, and neither have i been moderating posts.   Well that’s all because i have been ‘AFK’ in computer-gaming speak ie ‘away from keyboard’ and the reason for that is that i have been away at sea and moving Inanda from Ipswich round to the south coast.   As i write Inanda is now on a fore-and-aft mooring in the river Frome at Wareham in Dorset after a series of very long day sails across the Thames, around the south-east corner and along the south coast. Some of (most of) those day-sails have been very very long days indeed with starts before dawn and often only finishing at dusk.  I would have sailed through the night at least once but for the fact that Inanda has no navigation lights yet.  Added to the actual sailing, which on this trip was hugely tide-dependent, i also had the initial drive all the way cross country and then 5 individual train connections and 2 road trips to shuttle car, me and boat towards home as well.     This post will be just a very quick trip report as it was my first sail with Inanda, the trip has inevitably generated lots of new material, not just about the boat but also the places that i have put into .  There is a lot to say about the boat and it’s sailing qualities now but for now i am just reporting that Inanda is possibly more than halfway home…..maybe even just 3 long day-sails away.

This wasn’t my initial plan either as i had actually planned just to do some cruising on the east coast while i got used to Inanda as a sailing boat and then do the long delivery trip in June when both of us have leave.   My sailing instincts though were just saying ‘go now’ almost as soon as i had parked up at the Orwell yacht club, in fact i walked all my food and gear aboard by making a temporary pallet ‘bridge’ across the mud to Inanda’s bow and left the berth as soon as she floated.   I spent a couple of hours stowing gear and making a meal while moored in the Orwell and then motored downriver on the tide.  The first night turned out to be a very uncomfortable ‘rock-n-roll’ night on a mooring down near Ipswich/Harwich docks but there was nothing else i could do as it was by then fully dark and there were both ships and pilot boats zipping about.  I was really glad to get out of there before first light and head over to the Walton backwaters creeks which i had been advised was a good place to anchor.  To be honest i actually needed the extra day just sorting out and making ready as at that point i hadn’t even looked at the complex navigation and tides for crossing the Thames estuary the next day.

The ‘wanigan’ food crate/icebox and navigation table combined with the Thames estuary charts out and just about to start on the navigation work.

Thames.  The Thames is undoubtebly difficult, from the backwaters to Ramsgate is only about 45 miles in a straight line….unfortunately there are some 5 sand/mud-banks to get around and at least 4 main shipping channels to cross and the wind installations to get around.  Given that i also did the crossing on very fast running near-spring tides meant that i had a lot of cross-tide planning to do.   It was also a very unpleasant start when what had been a light northerly in the backwaters turned into a steady south-easterly with a steep nasty chop to contend with for the first couple of hours.  Now i know we have all had those trips where the wind follows us around and heads us all the way…..well my crossing of the Thames was primarily south on a south-easterly, then i had southerly’s as i headed south down towards Dover and you guessed it……a stiff westerly as i headed down channel.   Sometimes you can’t even make this stuff up !

The last wind farm of the day, this is the London array which was directly across my route near the end of the crossing.  This one is partially on a drying bank which has a swatchway running right through it (Fulgers gat) but to be honest i have no idea what the rules of navigation around wind array’s are so i went around the outside.  I made Ramsgate just before dark and just got onto the end of a pontoon inside the inner harbour.  Amazingly the marina seemed to be full of mainly Dutch and German racing and cruising boats, i suspect there must have been an offshore race finishing there as many of the racier boats cleared out during the night. 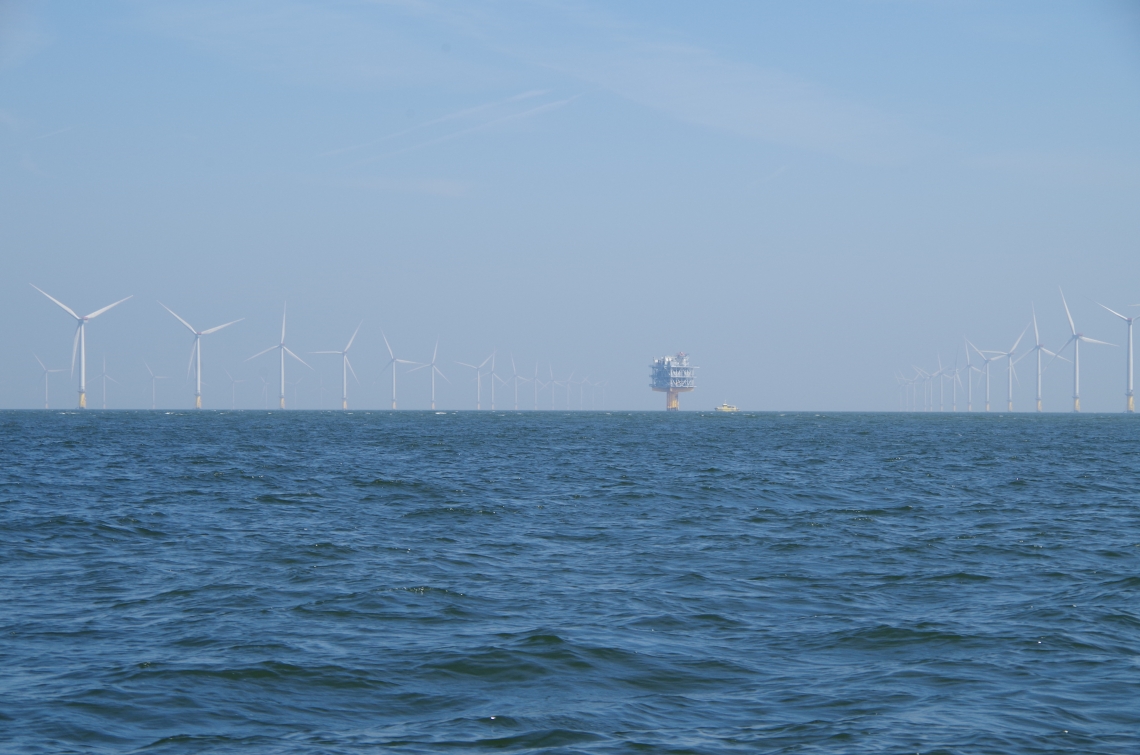 Dover.  Day 3 plan was Ramsgate to Dungeness and to anchor in the bay to the east of Dungeness point.  As totally not predicted the wind direction was initially south as i headed south and then went into the west as i beat along the coast.  By the time i got to Dungeness it was north of west which at least made the long Dungeness spit a windward shore.  It’s a bleak place with that huge ugly concrete power station on the end and just a few fishing boats pulled up on the shingle.  By about 0400 the boat was rolling in a new swell as the wind picked up from the west…..where else ! and i beat out into the channel to start the long upwind leg towards Newhaven.  That was the longest and hardest day slogging into a channel chop and very conscious that Inanda has broken frames and shouldn’t be driven as hard as i was having to do. Given that my course was dead upwind i eventually made a compromise, reefed right down and motor-sailed upwind for hour after hour.

Newhaven……just after i got in.   Sitting below making dinner, absolutely tired-out and i thought “that’s a big engine coming up the harbour”.  Of course there was then several hours of unloading and loading again until he backed out again and came back to repeat the whole process a few hours later…..not a restful night.   After that i was really prepared to hate the place but in the end i spent a day there resting a really enjoyed it’s unpretentious working port attitude.

Wight.  The one time i didn’t have an upwind slog was as i left Newhaven after a day’s rest, instead what i had was a very brisk power-reach.  I don’t know how much wind there was but with 2 reefs in i had both hands on the tiller and had to brace myself in the cockpit to keep her tracking.  That’s why i don’t have any pictures of that day until the wind died completely.  It was a really strange day for wind…..one moment powering along and then the next just rolling around in a nasty swell.  At one point just off Brighton, i had no wind at all but could see whitecaps inshore and the wind turbines offshore spinning well…..where i was : absolutely nothing !.  That was a maddening and difficult day as i made sail change after sail change, had multiple problems reefing/unreefing, endless problems with the furling gear and so on.

Brighton-breezy ! as the wind took off completely.

My overall plan was firstly to get to Chichester harbour, maybe cruise around for a couple of days and then find a berth or a mooring.  I was hoping to make contact with one of several wooden-boat boatbuilders to discuss work on Inanda and then go and collect my car from Ipswich so that i could then get home……it didn’t work out that way at all although i did get to meet Nick Gates which was great…and very productive.  The berths and moorings just didn’t work out at all and i quickly left for Poole where Jackie had managed to arrange a river mooring.  I will cover that, the Solent section and Poole in a separate post.

I will end this post with getting into Chichester harbour and anchoring for the night in what seemed an idyllic spot near to the ‘beach’ on that shore.  For those that know the area my anchorage was a little bay just outside the main channel and to the north of the winner sand.   What happened next, the next morning, is the stuff of yachtmaster exam nightmare and articles in the yachting press ! 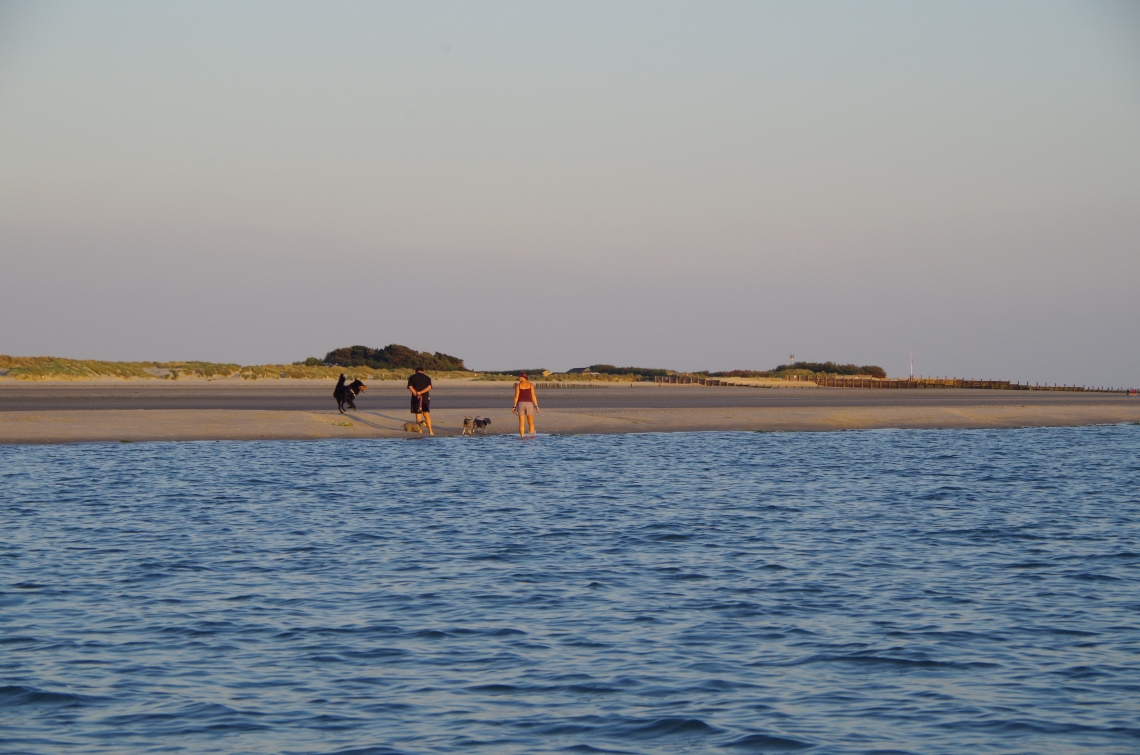 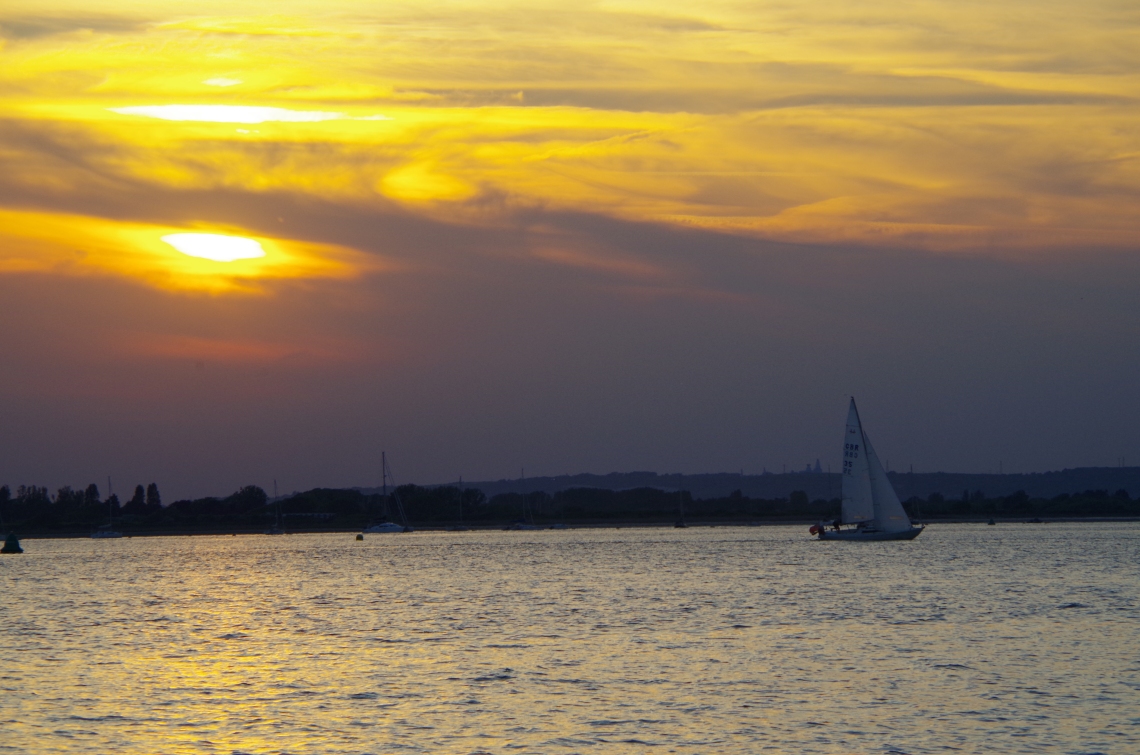