So here’s a thing.

In this post two completely different threads of my blog, hiking/exploring on foot and sailing/sail and oar, both come together in one place albeit briefly and then diverge again.

On the one hand i’m doing a lot of thinking about, and training for, a proposed trip to the canyonlands of southern Utah in the USA, while i haven’t mentioned the grand canyon of the Colorado river because i don’t have any plans to hike in there it is sort-of always in the background.    Then, i’m working on my sail and oar project boat, or at least at this stage, working on working on the plans for that project and iv’e arrived at Dory’s by way of the Howard Blackburn, the Grand Banks Dory fishermen and the more modern Dory shapes that i’m going to cover today : the meeting point being a now very specialist form of Dory hull that is used by river runners to take tourists into the big whitewater runs of the Colarado and Green rivers.

Lining up for the Vee on a rapid.

Some years back we took a career break and went on a 4 month trip around New Zealand , touring and hiking anywhere and everywhere that we liked the look of and one of the more unusual trips that we took was a canoe voyage down the mighty Whanganui river on North Island….i seem to remember it as a good 3 day/night trip with a young guide and 3 canoes.  Neither of us had ever canoe’d before and i knew nothing about the strokes i should be using, in fact all i had was a dodgy ‘goon’ stroke and the ability to paddle forwards but in a ‘follow this line’ kind of way i sat on guide Vicci’s tail and we ran the big river including some neat grade 2-3 rapids and i think a good time was had by all…..it certainly inspired me to go and learn how to canoe properly when we got home.

Today when i was searching for nice river running Dory’s to borrow for this post i came across this next photograph and went…..oh, now that would have been fun….but only if i’d been able to steer/row my own boat.  After all, i’m a sailor and i know about rowing, except that it’s a different technique in a river dory because the steersman/rower does so when facing forward and largely lines up for the rapids by reverse ferry-gliding across the current. 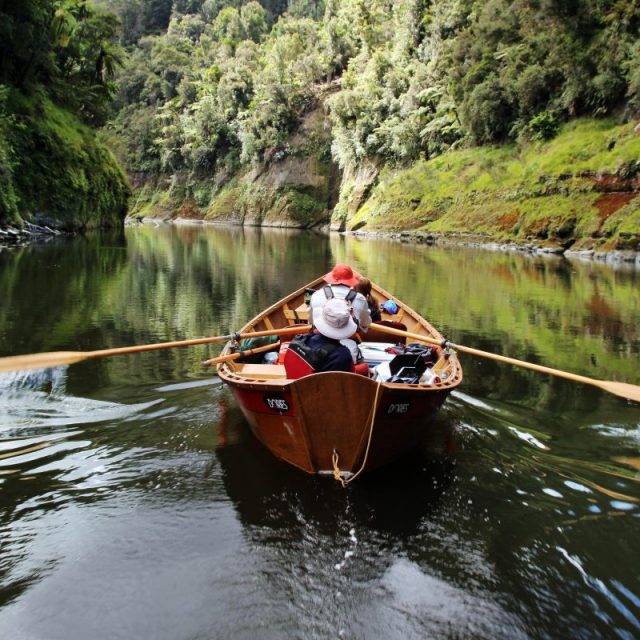 So, there are Dory’s.

The original Grand Banks Dory usually had a narrow rockered flat bottom , strongly flared but flat topsides and high ends.  For their size, around 18 feet or so they were also heavily built and intended for carrying heavy loads ; in fact they become a much more stable boat when they were full of load…in the case of the Grand Banks boats a load of Cod.  In their original and unloaded form they are actually quite low-stability boats having a narrow floor/waterline and as mentioned only really gain stability when well loaded.  Also in their original form they were designed to stack or nest on the deck of a fishing schooner so they had very little internal structure….no buoyancy tanks for example and that doesn’t translate at all well into a boat intended to run big whitewater rapids where what you need is stability and keeping the water where it belongs….outside the boat and not down-flooding it in a caspsize or just a big wave.

And there are Dory’s.

While it was a useful early discovery that a Grand Banks Dory was a much better boat to run the big rivers in, once the forward facing rowing/steering technique was adapted, these boats could still capsize and/or swamp in big whitewater.  I kind-of want to mention the Lewis and Clark expedition down the Colorado river here and say a little about the boats they used and the techniques they employed , taken directly from working rowing boats and canoe’s…..that’s a separate story though and well covered in several books about the expedition.

Dory’s worked well because they are generally a lot easier to manouevre in a fast flowing river than a standard working rowing boat of the time ; something like a ‘Whitehall’ for example which were intended for fast and straight line speed.    What happened in the evolution of the river running Dory is that they became specialised boats, usually wider in the floor, wider overall for greater stability and then decked completely apart from the footwells for driver and passengers.  These boats are much more stable both initially and in big breaking waves….also, because of the decked-in design they can only take in small amounts of water in the same ‘big water’ and tend to stay ‘high and dry’ in the water. 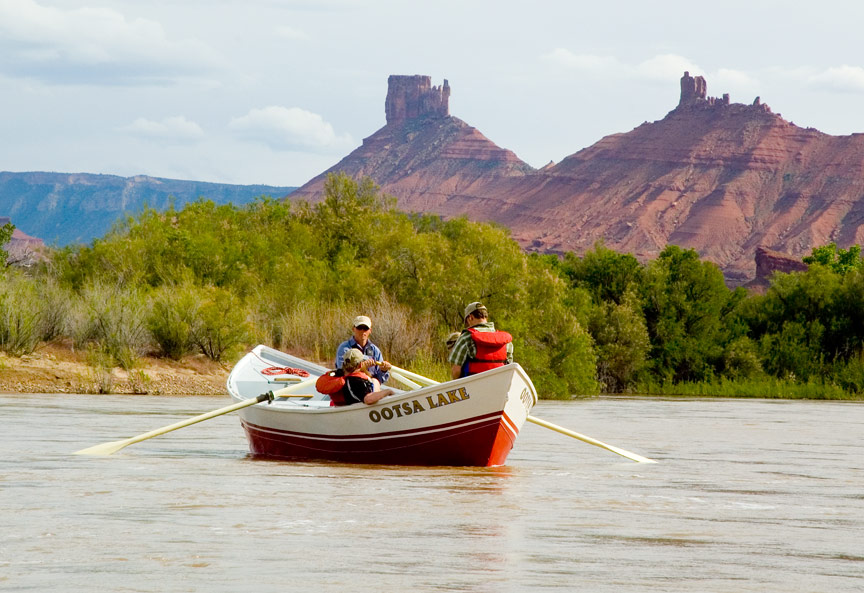 And then there are…..

The modern lightweight Dory’s.   Thus far in my own MPV boat project one Dory form boat has made it through to the potential build list and it’s an actual boat that we can take a look at so here goes.    This is the Northeaster Dory design by CLC boats (Chesapeake light craft) and which can often be bought as a kit. 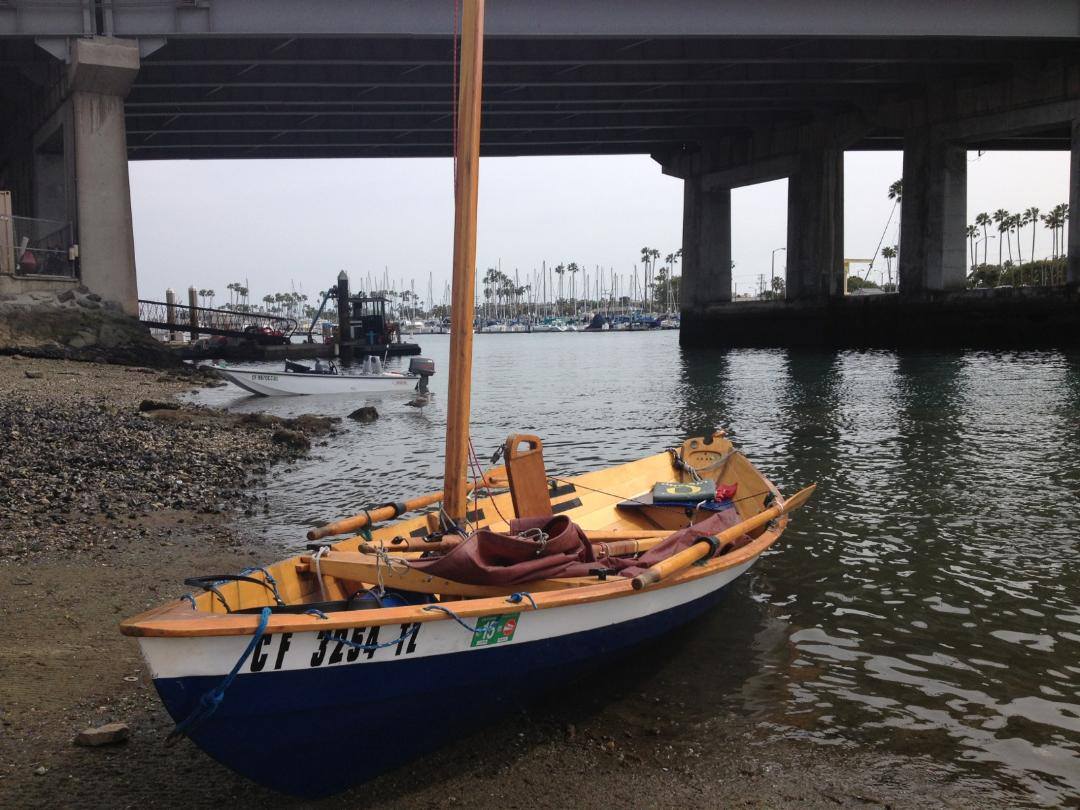 This is now another departure from the original Dory shape and design, at about 17 feet it’s similar in length to a working dory but now multi-panelled rather than being slab-sided and a lot lighter than the original for having been built in lightweight ‘stitch and glue’ plywood rather than what my mate Al calls ‘tree-wood’ ie heavy planks and boards.

The design appeals to me because firstly it’s a sweet looking thing and iv’e watched a few video’s of these boats being built, rowed, sailed and capsized !.  The building method is very simple….either loft and cut the plywood panels or take them from the kit and basically drill holes and ‘sew’ them together with wire or cable ties and then glass-epoxy tape the joints.  Me…being a very scrappy workshop noob should just about be able to do all of that.     In the design , by the way, there are purely rowing variants and then a couple of different sailing set-ups ; basically a small sloop rig or a single stick lug which looks as though it would be a better option for this narrow, light and low stability craft…what it isn’t intended though for is an engine : and here what i must point out is that there is a slightly larger boat in the same range that is designed with a motor in mind.

If you’re just here for the nice pictures and sea-stories then you can ignore this section ; for the boaters though this next part is the most important section because we now have to think about modern, lightweight Dory’s and their limited stability……ah !

Boat design and ship design both rely on a hefty dose of mathematics…..that or they tend to tip over when they’re not supposed to as did the Mary Rose, the Wasa, the Titanic and the Herald of Free Enterprise : the first 2 simply capsized because they were too top heavy and in the known case of the Mary Rose because she had limited stability, was over loaded and down-flooded through her open gun ports.   Interestingly and tragically the Herald capsized and sank because she took in water straight through her open front car doors and went over because of a phenomenon known as free water effect….the large volume of water all sloshes to one side and ‘that’s all she wrote’….canoeists have the same problem when their boats swamp….and the same thing happens with Dory’s , especially ones that have no buoyancy tanks.

This is the actual Northeaster design in a swamped and capsized state.

Lets talk about stability for a while.

Form stability in ships and boats can be expressed mathematically as Length x Beam x Beam squared ( NS = L x B x B²) so from that we can see why beam is the primary driver in stability and therefore that a beamier (wider) boat starts off having a lot more ‘form’ stability than a narrow one.  Thought about for a minute or two and this also explains why the Dory form has low stability….because the immersed beam (width) of an unloaded boat is very narrow indeed and why the stability increases as the beam (width) increases due to the flared sides.

The video above shows that the boat has quite poor stability when it can be tipped down to it’s gunnel just by leaning out heavily, not even standing on the gunnel….that’s not much more stability than a canoe has and note how quickly the Dory starts to flood.  That’s actually also the sport canoeists problem as well, capsize an open canoe and it will often tip back upright but almost totally  immersed depending on how much extra buoyancy it has in the form of buoyancy bags or built-in tanks.  The self rescue technique a canoeist has to learn is to first flip the flooded boat upright, partially bale it out and then do a self recovery back into the boat ; as a canoeist and canoe instructor i had to be able to do that quickly, in realistic conditions and to teach as many variants of rescue techniques as possible.    What helps, in fact what is essential in both the open canoe and the lightweight modern Dory is to treat them similarly and to set up the Dory in the same way that a sport or open water expedition canoeist does and that is with either built in buoyancy tanks or lashed in buoyancy bags.

In this second video we see the actual boat again in brisk sailing conditions ; this is Watertribe member ‘Leather-lungs’ and his CLC Northeaster. Notice here several things : that the way the boat is set up is just like an open canoe with what look like airbags for and aft, that the driver keeps his weight right down in the boat to enhance the stability, the amount of sail being carried (deep reefed) and just how damn quick it is….some 10 knots maxed out in a 17′ boat !

And finally there are Dory’s.

Where does that leave me then ?, well, i still like the Dory concept although as some professional yacht designers say, they’re not what many sailors think they are and with the new lightweight designs we don’t even start with a stable hull.  I still like the CLC design and i think i could build one, i also think that with a canoeing background i can see how to either tweak the design slightly or how to do the boat fit-out so that it has similar recovery characteristics as a well set up instructors canoe.  At this stage the CLC Northeaster is still a potential contender but only with the understanding that the basic design needs a tweak or 3.

And finally….i need a coffee break now so i’m going to cut this one off although i do now have another Dory post in mind.