A good read tutu perhaps……after all i am talking about Micheal Palin here .

Just before Christmas me and my partner had a posh nosh away night at the excellent Salutation inn at Topsham on the Exe, there is a link here which i will explain later in the post.  We spent that day fighting our way through the Christmas shoppers on Exeter’s high street but escaped to one of the better bookshops for an hour of browsing as i had a handful of book tokens to spend.  A book that immediately caught my eye was ‘Erebus’ by Micheal Palin : i picked up a copy only to have my partner tell me that i couldn’t buy it because she already had bought if for me, kind-of a Christmas spoiler alert !

The Topsham connection with the book is that of the second ship featured in the story and in fact the better known of the 2 ships : the ‘Terror‘ which was built in Topsham in 1813 at the Davy shipyard.  ‘Terror‘ was a specialised sailing warship designed and built to carry heavy mortars for bombardment of shore defences.   She saw active service during the naval war against the US, taking part in several actions against fortifications.   One of her battles was the bombardment of fort McHenry, that  attack inspired Francis Scott Key to write the poem that eventually became known as “The Star Spangled Banner” .

“Oh, say can you see by the dawn’s early light
What so proudly we hailed at the twilight’s last gleaming?
Whose broad stripes and bright stars thru the perilous fight,
O’er the ramparts we watched were so gallantly streaming?
And the rocket’s red glare, the bombs bursting in air,
Gave proof through the night that our flag was still there.
Oh, say does that star-spangled banner yet wave
O’er the land of the free and the home of the brave?”

Model of the bomb ketch ‘Terror’ at the Salutation Inn. 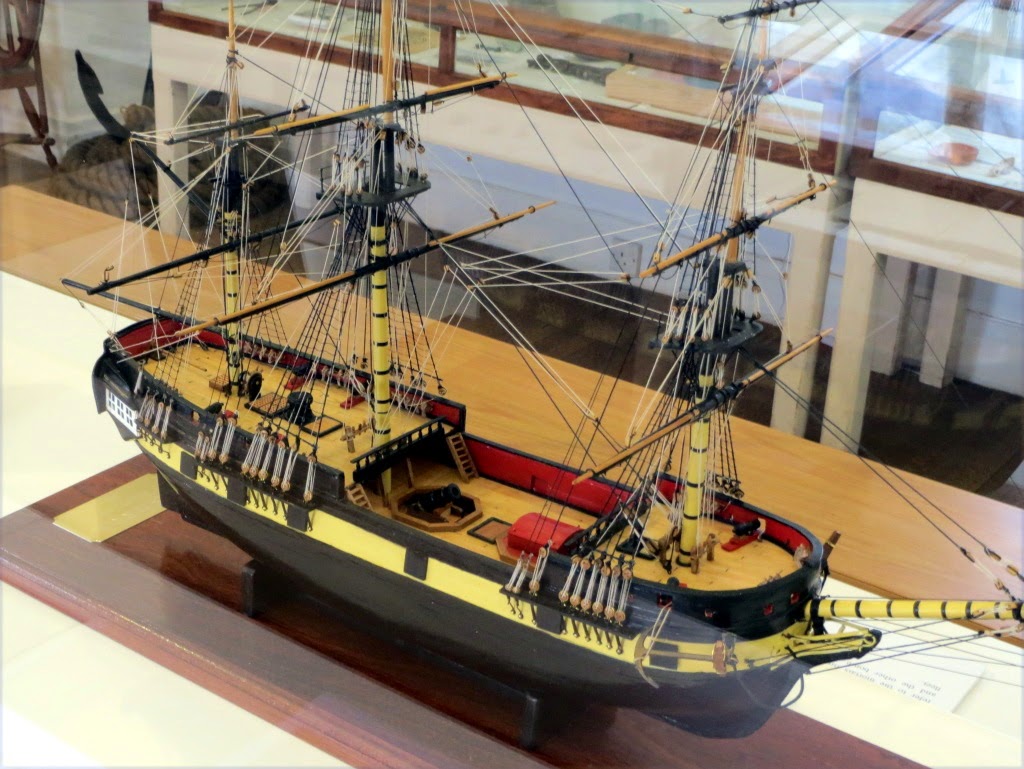 I haven’t been able to track down the site of the Davy shipyard where she was built and i’m waiting for a historical book on the subject of shipbuilding in that area….meanwhile the actual ship of the book title ‘Erebus’ was built in Pembroke south Wales : another area i know well having done several seasons of sea cliff climbing down there.

The actual story of both ships is that they only had short active service careers as working bomb ketches because there was no real need for such specialised ships after the end of the Napoleonic wars.  Both ships spent some time laid-up at anchor in the Medway before a new use could be found for them.  As warships go they were on the small and stout size, not spectacular sailing ships, rather steady sailers but very strongly built due to the need to absorb the huge recoil from the deck mounted mortars.

Erebus did serve in the Mediterranean for 2 years but was recalled for a major refit to prepare her for service in the Antarctic.  During the refit she was largely stripped of her main armament , simplified and strengthened.  Then in 1840 under the command of James Clark Ross she set out with the Terror to continue the exploration of the Antarctic an to continue the research into the earth’s magnetic field…crucial to navigation at the time.    Of course she had to get there first and that’s a long way via Madeira, Ascension Island and Cape Town (Simonstown) in South Africa.  Later in the post i will come back to this as it’s pretty much what any sailing ship going that way had to do and mirrors my own experience of going down to the Southern ocean.

Her work in the Antarctic was nothing short of astonishing as both vessels had to sail into and through pack ice until they discovered and were stopped by the great ice shield bordering the antarctic continent.  Taking a sailing ship into and through ice is extraordinarily dangerous and nearly fatally damaged both ships at one point….one of the ships having to make a stern-board under sail and with a badly damaged rudder to clear a small channel between icebergs.   Both ships spent 2 seasons exploring the ice after stocking up and re-fitting in Hobart , now Tasmania, then ‘Van Diemens Land where there was a British penal colony.  I mention that because the only way to get convicts there was under sail in the miserable conditions of a penal ship and to get there also involves a brutal Southern ocean passage.

Erebus and Terror in New Zealand from the painting by John Wilson Carmicheal. 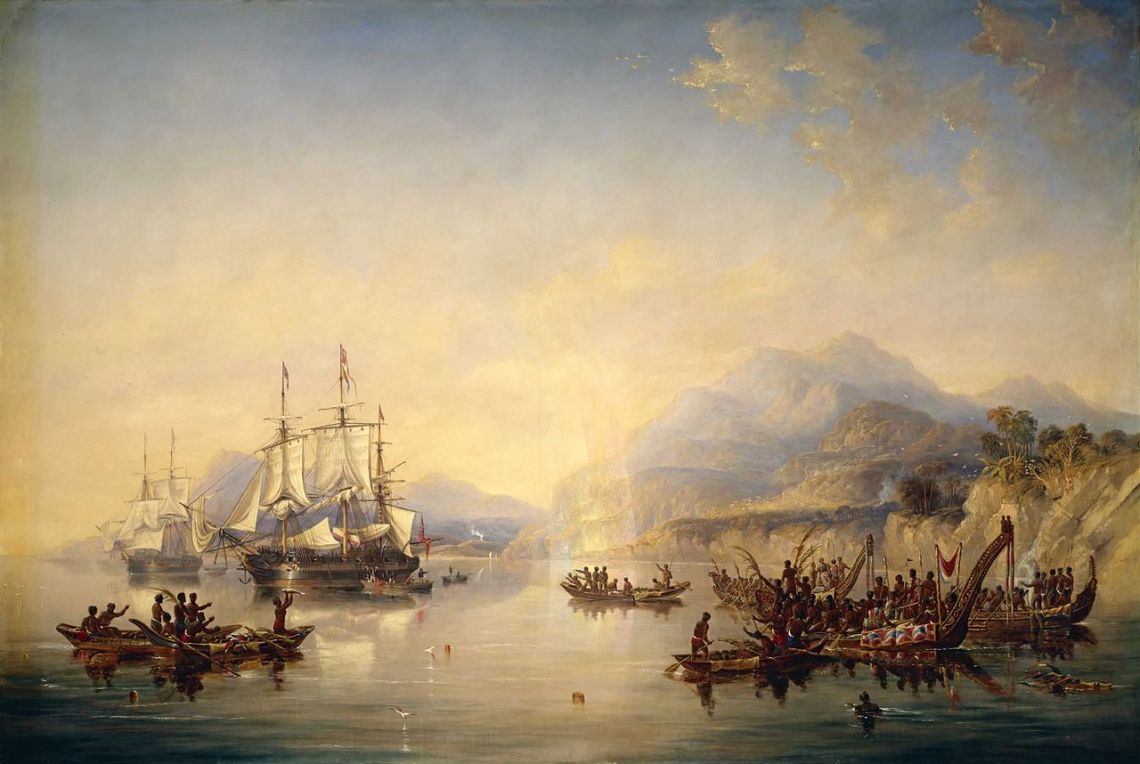 However : less ‘me’ talk and more book review ! I will come back to the historical account and the mystery of both ships disappearance in the Arctic later on.

Micheal Palin’s book is nothing short of excellent, it is perhaps the best sea story i have ever read : factually and historically correct but also extremely engaging and well written.  I wish i could write that well !

This is a seriously good read for anyone who has any interest in ships, the sea and the exploration of the high latitudes : the arctic and the antarctic ‘land’ masses and the seas around them.  In the 18th and 19th century it was a major goal to find a quick ‘back door’ route around to the orient which had become very important for trade….the problem at the time being that to get there was a very long sea journey down and around the Cape of Good Hope at the least, which wasn’t always in friendly hands…..and a return trip really meant coming around the Horn to get home.

While the Erebus and the Terror made successful voyages through the Southern ocean, getting right up to the great ice shield of Antarctica their real work and ultimately fatal journey was to be in the northern hemisphere and in trying to find the supposed ‘north-west’ passage north and west of Hudson’s bay.  This was of course the doomed ‘Franklin’ expedition of 1845

Rather than me write a whole account here is the Wiki entry :

“Franklin’s lost expedition was a British voyage of Arctic exploration led by Captain Sir John Franklin that departed England in 1845 aboard two ships, HMS Erebus and HMS Terror. A Royal Navy officer and experienced explorer, Franklin had served on three previous Arctic expeditions, the latter two as commanding officer. His fourth and last, undertaken when he was 59, was meant to traverse the last unnavigated section of the Northwest Passage. After a few early fatalities, the two ships became icebound in Victoria Strait near King William Island in the Canadian Arctic, in what is today the territory of Nunavut. The entire expedition, comprising 129 men, including Franklin, was lost.

Pressed by Franklin’s wife, Jane, Lady Franklin, and others, the Admiralty launched a search for the missing expedition in 1848. Prompted in part by Franklin’s fame and the Admiralty’s offer of a finder’s reward, many subsequent expeditions joined the hunt, which at one point in 1850 involved eleven British and two American ships. Several of these ships converged off the east coast of Beechey Island, where the first relics of the expedition were found, including the graves of three crewmen. In 1854, explorer John Rae, while surveying near the Canadian Arctic coast southeast of King William Island, acquired relics of and stories about the Franklin party from local Inuit. A search led by Francis McClintock in 1859 discovered a note left on King William Island with details about the expedition’s fate. Searches continued through much of the 19th century. In 2014, a Canadian search team led by Parks Canada located the wreck of Erebus west of O’Reilly Island, in the eastern portion of Queen Maud Gulf, in the waters of the Arctic archipelago. Two years later, the Arctic Research Foundation found the wreck of Terror south of King William Island. Research and dive expeditions at the wreck sites are currently ongoing.

In 1981, a team of scientists led by Owen Beattie, a professor of anthropology at the University of Alberta, began a series of scientific studies of the graves, bodies, and other physical evidence left by Franklin’s men on Beechey Island and King William Island. They concluded that the men buried on Beechey Island most likely died of pneumonia and perhaps tuberculosis, and that lead poisoning may have worsened their health, owing to badly soldered cans held in the ships’ food stores. It was later suggested that the source of this lead may not have been tinned food, but the distilled water systems fitted to the ships. However, studies in 2013 and 2016 suggested that lead poisoning was likely not a factor, and that the crew’s ill health may, in fact, have been due to malnutrition – specifically zinc deficiency – possibly due to a lack of meat in their diet.[6]

Cut marks on human bones found on King William Island were seen as signs of cannibalism. The combined evidence of all the studies suggested that the crewmen did not all die quickly. Hypothermia, starvation, lead poisoning or zinc deficiency, and diseases including scurvy, along with general exposure to a hostile environment whilst lacking adequate clothing and nutrition, killed everyone on the expedition in the years following its last sighting by Europeans in 1845.

The Victorian media portrayed Franklin as a hero despite the expedition’s failure and the reports of cannibalism. Songs were written about him, and statues of him in his home town of Spilsby, in London, and in Tasmania credit him with discovery of the Northwest Passage, although in reality it was not traversed until Roald Amundsen‘s 1903–1906 expedition. Franklin’s lost expedition has been the subject of many artistic works, including songs, verse, short stories, and novels, as well as television documentaries.”

The Wikipedia entry is a good place to start but in my opinion Michael Palin brings the whole thing alive…..i would say the best account of the Franklin expedition i have ever read, and i like that kind of thing.    For anyone who asks ‘what’s it like’ in the Southern Ocean aboard a sailing vessel this book is a very good place to start…..if you haven’t read it so far then put it on this year’s Christmas list.