WABI’’’ real time : at anchor off the Plage du Trez , essentially the beach in front of Benodet.

Surprise surprise and it’s raining again.  It would have been slightly more useful for the post if it had been the ‘Plage du Trev’ (Trev’s beach) but the wind direction forecast was good for this one so….

I’ve just done the short day-sail back into the bay of Benodet from the Anse de Lesconil where I had a night at anchor off the beach there.   I’m anchored here because the Odet Fleuve is ebbing strongly and I don’t fancy the hard motor up the river.  Outside, right now, there’s a lot of shouting and squealing going on because the local sailing school from the other side of the river have decided to run up on the beach en masse and just a few yards away.

From the looks of them this seems to be a teenage group and that they had a lot of fun doing it because they have all basically run their catamarans up on the beach with a bit of way on.  I’m kind of getting used to this sort of thing any day of the week because there are sailing schools just about everywhere : even the tiny port at Lesconil had one, and it’s quite normal to see groups of really young kids being shepherded around in fleets of miniature sailing dinghy’s or small catamarans. 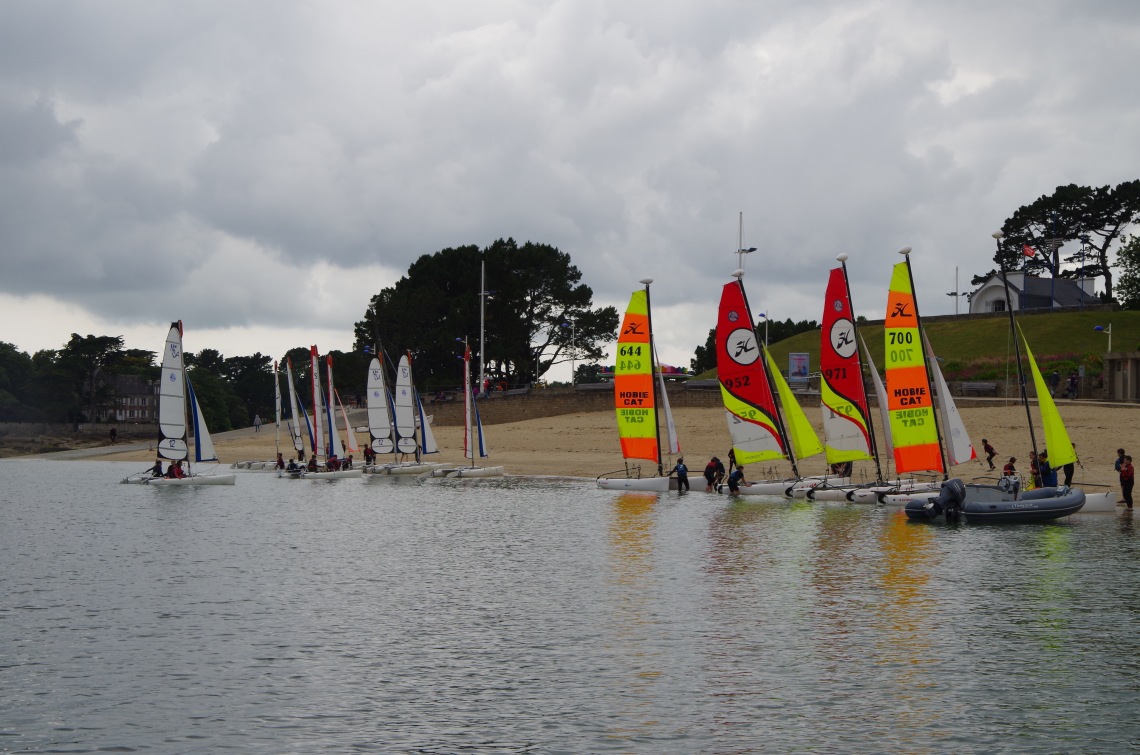 In Audierne the sailing school there I saw out several times and made it as far as nodding/bonjour terms with the RIB driving instructor.  On my last day there he was obviously running a slightly advanced class of young teenagers, just about, on very quick looking little cats complete with trendy black square top mains (reefed) and the days lesson looked like an introduction to using the trapeze !.  A couple of the teenage crews mainly did a lot of excited squealing but one crew of 2 young girls definitely had the idea of heading for the horizon at full multihull speed and the instructor had to go tear-arsing after them.

Back in Brest the big slipway on one side of the capitanerie was often filled with large groups of school age children getting into/out of or onto any combination of kayaks, paddle-boards and sailing boats.  It looks as though many French schoolchildren go through these kind of centres as part of their normal school year.   Today I was briefly near the marina at Sainte Marine and a large group of very small children were all being herded aboard the big Lugger , Corentin, for a trip up the river and back.  At the weekend the same school or sailing centre at Sainte Marine seem to host just about anyone who wants to get out on the water in some kind of craft.  They seemed to have a little race going on in the small, high performance catamarans that they use…..I think one crew were extremely put out when I was able to ghost past them in WABI’’’ !, naughty of me I know but I can’t resist a little challenge like that.

I couldn’t follow the chat….but his hand signals were pretty good. 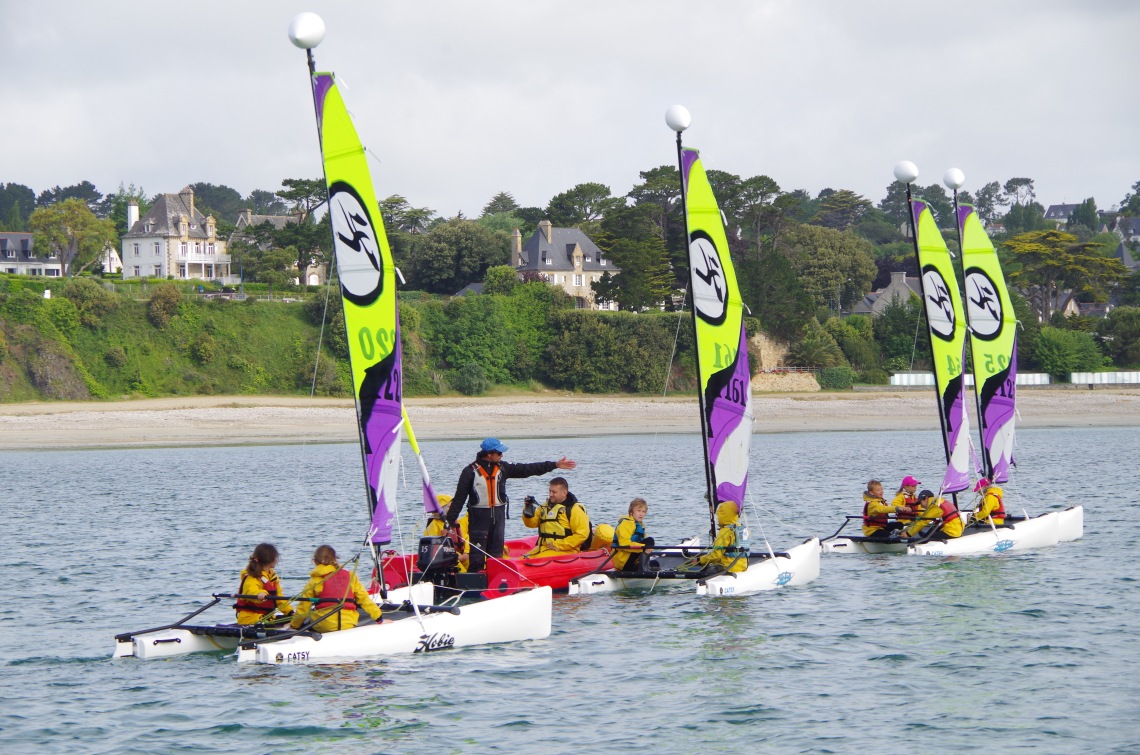 Anyway….today’s post is a peculiar mixed bag of some of the odd stuff that iv’e seen happening on the water since iv’e been in France, one incident in particular I’m still not sure what they were trying to achieve.

As I write, the big Lugger, ‘Corentin’ has just been past again with another group of very young children aboard all bundled into lifejackets that seem larger than they are, there’s quite a lot of energetic shouting and squealing on board so I guess they are having fun….I’d be a lot more impressed if the full time crew un-brailed at least one of the 3 lugsails but hey-ho !

So, I’m used to the idea that France gets it’s kids out on the water from a young age, by all accounts the late, great Tabarly first went to sea aged 3 !. I like it that many kids then get the experience of handling a small sailing boat or even kayak early on and then that they can progress to bigger and faster boats.  It’s all very egalitarian, well organised in a ‘herding cats’ kind of way and the instructors seem to have their routine all worked out.  It all feels a lot different to my few contacts with British sailing centres that take kids out on the water…my usual impression of those was joyless and overly risk sensitive.

France then does have, certainly used to have, centres like the ‘Glenans’ school just across the water from here where they used to send young adults to sea very adventurously in small cruisers….they regularly turned up all over the UK south-west in boats that could be hardly classed as offshore capable.  I will talk about the Glenans a bit more in other posts because I really want to get out to the archipelago myself.               Then of course sailing in France is a big deal and many of the sailing professionals are national superstars .  Today, mention any of the major ocean races and it’s usually a French skipper driving and the boat is most likely sponsored by one of the big banks or big businesses. 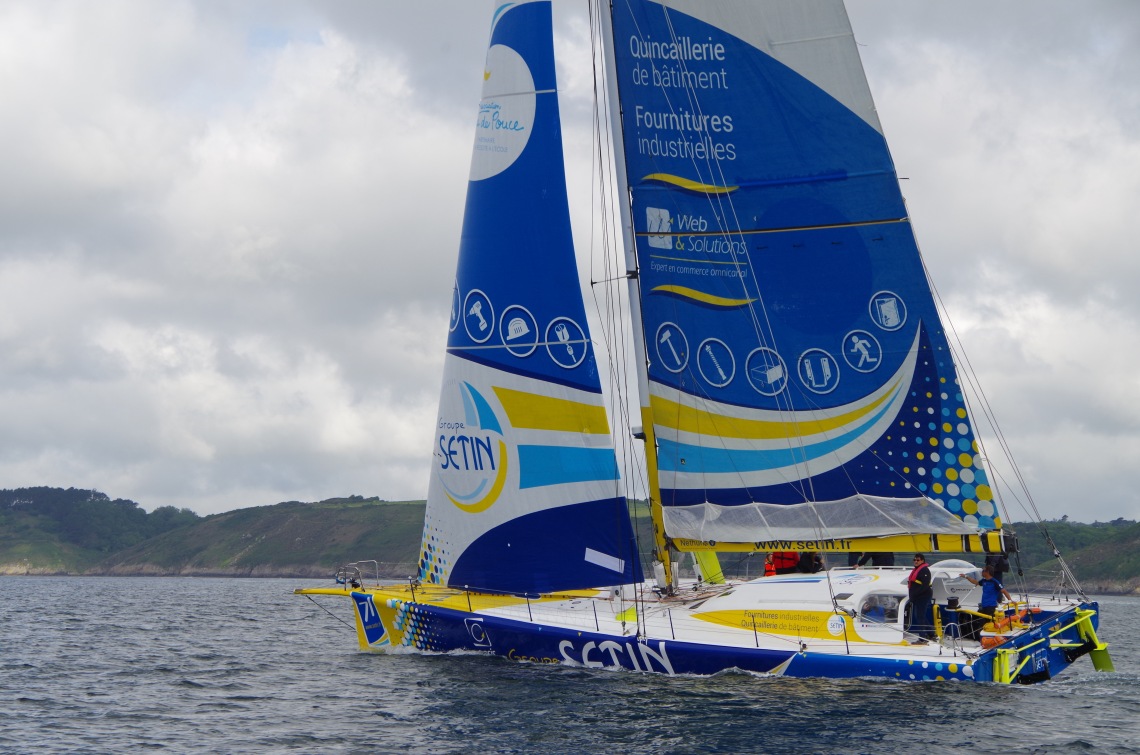 I guess you can see where this is going : start em young, get them on the water and make sure they have some fun while they’re at it.  Then, later some of them will become sailors…some of them will become very good sailors and the odd one will appear many years later in full corporate rig and sharp sunglasses driving an Open 40, Vendee 60 ,maxi-cat, you name it !.  In brief sailing in France is part of the curriculum, important enough to get school kids doing it and ultimately quite a big deal…..as is cycling of course and just compare the excellent attitude to cyclists in France and the dire, moronic attitude of our own Clarkson and co in the UK : how does it go Jeremy ?….”shoot them in the face” was one I remember !

Back to the story then.

So, we were cruising in the Rade de Brest one morning. I think we’d moored the night before at Port Tinduff and Dolf the dolphin had been around to check us out. The next morning we had enough wind to leave the mooring under sail only so we poked into a couple of the rivers within that large bay.  Late morning and we headed around the ‘Bindy’s’ into the southern section of the Rade and made our way into the Riviere de Hospital Camfrout and stopped there for lunch.  During lunch a very neat , half-decked gaffer of about 18 feet beat up to the moorings in a series of neat tacks.  As they got closer I could see that the skipper was a lady and her crew were, I suspect daughters.  They worked their way up to their mooring and moored very competently under sail and then spent a while stowing and tidying away.  Last I saw was them handing the 4th crew member, a decent sized black lab, down into their dinghy and rowing ashore.  All good competent sailing stuff and nice to witness. 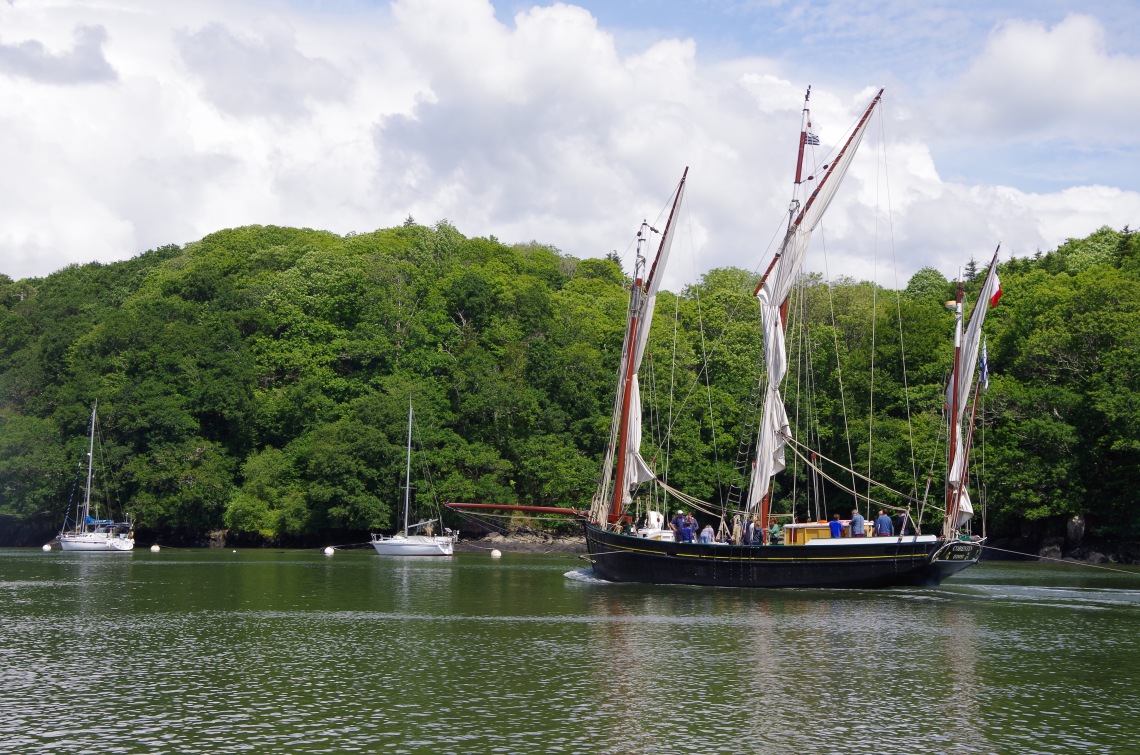 That afternoon, as the tide turned and started to flood in the Rade, we sailed the short distance to Landevennec and the entrance to the Aulne river.  I know of a group of mostly unoccupied moorings on the west side just off a small shallow bay and slipway there.  We moored in the brisk running flood, settled down and I think started making dinner.  I think it was while I was making dinner that a medium sized cruising boat came past quite close and attempted to pick up one of the other moorings.  Whatever, there was a bit of shouting and a fair bit of engine revs up and down : not so unusual when trying to moor a high bowed yacht in a strong tide.

It was a little while later when we had the ‘what’ moment.  I was sat one side in the cabin and was looking straight at the other boat only a boat length away.  Of the 4 people onboard one of them seemed to be trying to stand on the mooring buoy while hanging onto the bow of the yacht…iv’e no idea why he climbed over the bow or what he was trying to do. He made a few futile efforts to heave himself back over the bow but was clearly getting tired and ‘sagging’ gradually.  First one foot would go in the water and then the other and he ended up hanging off the bow at full stretch. He had several goes at heaving himself back up over the bow but clearly didn’t have either the strength or the technique to achieve it.

Now…the other members of the crew….there was a lot of gesticulating going on between , I think, the skipper and the two women aboard : one of whom seemed to be running up and down the deck ineffectually and the other who wasn’t doing much of anything.    The bloke standing on the mooring buoy but now more or less in the water but still hanging on was clearly getting tired but didn’t seem to want to let go and just swim around to the stern ladder.             Eventually the ‘skipper’, I think, passed a line around matey in the water and hauled him aft to the stern platform and ladder and we saw him climb back aboard, very wet of course.  The weird thing about all of this is that they had a dinghy in the water at the stern all the time.  We did eventually see matey recovered over the stern so all was well and no disaster and yes I did wonder at one point whether I was going to have to get in the water myself and do a rescue swim….long time since iv’e had to do that and not in a strong tide either.

I kind of wish we’d had some score-cards : La France….Nil points 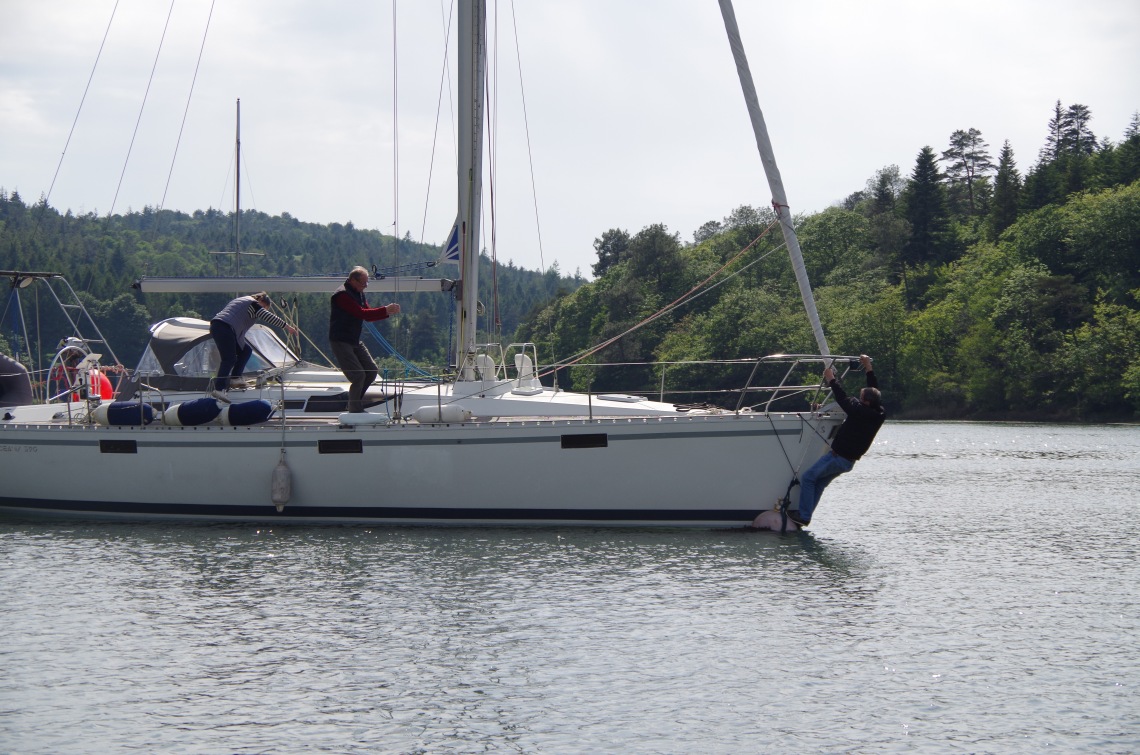