At some time soon i will have to replace Inanda’s running and standing rigging, the running rigging is easy and i only have to decide how low-stretch to go.  Some people advocate keeping everything a bit on the low-tec and ‘give-y’ side claiming that old boats shouldn’t be cranked up hard with modern lines.  I don’t believe in that as it’s more likely to be able to keep sails flat with low-stretch modern halyards.  The standing rigging options have become a lot more interesting though as Inanda is currently rigged all round with galvanised wire shrouds which look about due for replacement and there are other options. 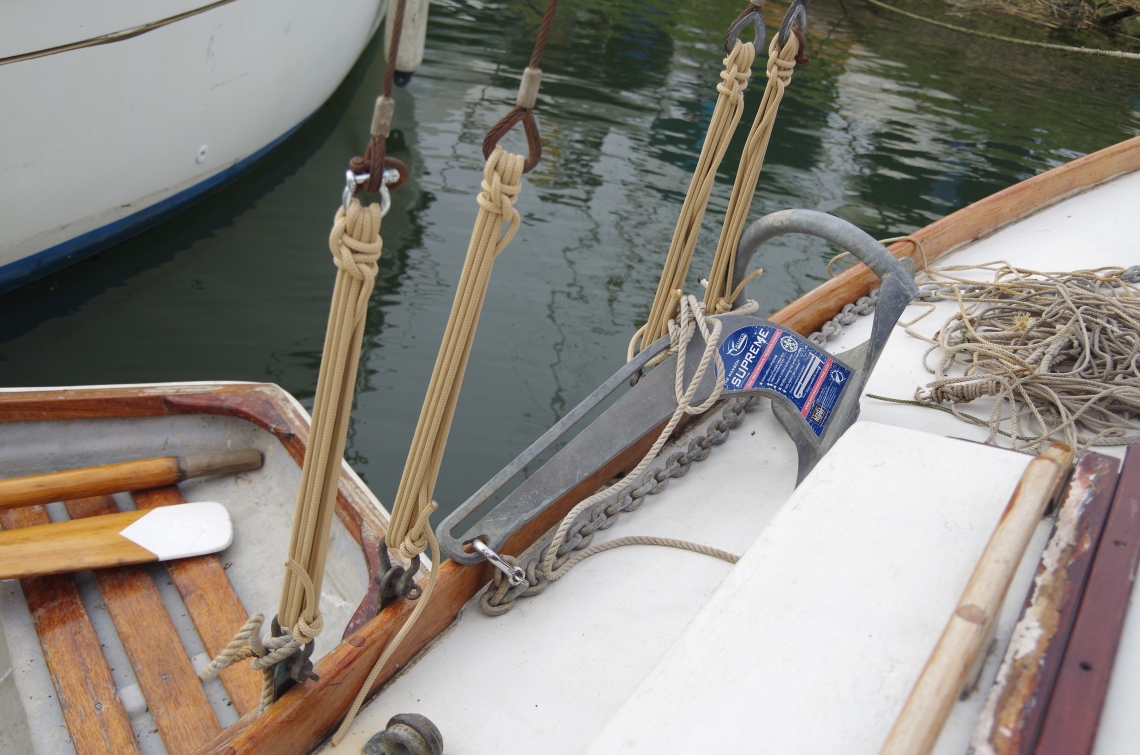 My first proper job in a boayard was as a temporary replacement for the yard’s rigger while the boss found somebody else who knew what they were doing.  However a few months of taking rigs out and putting them back in the right way up seemed to convince the boss that i had the basic idea so i ended up doing that job until the yard went bust in the early 80’s.  Even at the start i just had an interest in the apparent complexity of masts, wire, rope, blocks and all the odd pararphernalia of sailboat rigging.  Compared with today what we did was very simple as the mostly what we did was simple talurit compression swages and rope to wire splices.  The best rope we had was braid on braid, i hadn’t even heard of kevlar or dyneema for rope at that stage.   Today ‘soft’ rigging, deadeyes and lashings are all very much back on the menu on high-end race boats.

Inanda is rigged with 4 galvanised shrouds per side, an inner and outer forestay, wire bowsprit shrouds and originally a chain bobstay.  She doesn’t have any backstays or preventer stays at all, relying solely on the aft shrouds to tension the forestays against and to resist the jib halyard loads.  It would be a simple enough task for me to take the old shrouds off, measure up, make some adjustments to reduce the lashing span and then just order up some new ones.  Galvanised wire isn’t expensive and neither are simple talurit swages and that, if you will, is the baseline known standard for the boat. Another option i looked at while preparing this post is buying a hand pumped hydraulic swaging press at around £80 , buying in the wire and fittings and just doing the whole job myself.  You might notice later on that with the cost numbers that wouldn’t be a stupid option as the cost of commercial swaging by a rigger is around £2.50 per swage and i would need to have 24 to do at minimum so that’s getting very close to the tool being paid off in the first job.

In the long history of sailing craft though wire rigging is a very recent innovation and really only came about when steel wire technology jumped ahead of rope technology in the 19th century.  Up until then all rigging was in the form of ropes spun from natural fibres.  Just as there is no reason to use manila halyards today there is equally no reason to continue with wire shrouds on a simple sailboat like this one.  What i am investigating as a project for the boat is re-rigging using ‘soft’ shrouds in one of the modern high-spec ropes, most likely Vectran which is one of the Aramid group, similar to Kevlar or Dyneema in one of it’s variants.

Something i really like in modern rigging is that a lot of it on high-end boats has reverted to soft lashings instead of mechanical fasteners.  One of the home projects that i hope to be doing is re-learning and posting about soft rigging skills.

Lets take a look at some of the numbers.

Starting with the standard option ie galvanised steel wire of 7×7 construction we find that the minimum breaking loads of 5 and 6mm wire are 1750 and 2250 kg respectively. I get the weight quoted for the wire at 0.096kg/m for 5mm and 0.138 kg/m.  Lets say we work with 5mm shrouds and guesstimate one as being 8m in length that would be around 760 gms plus the weight of the swages and hard-eye.  If we said 800gm per shroud on average then we would get a total weight of 8kg for the shrouds and 2 forestays.  Total weight aloft would be around 10kg.  Checking a couple of rigging supply shops 5mm galvanised wire is quoted at 65 pence per metre and then £2.50 per swage.  Each shroud would come out at around £5 for the wire and another £5 for the swages.  Some shrouds on the boat would need hard-eyes both ends and some of them are soft-eyes going completely around the mast.     The total cost of re-rigging the boat (standing rigging) is still only around £100 and definitely worth the cost.  The downsides of galvanised wire ?, well it does corrode although it can be treated with ‘slush’ as it often was (messy) and it is quite abrasive on sails.

Lets try and do the same exercise with one of the modern synthetic ropes.

For this exercise i have had to do a lot of net surfing to find anyone who has already done the work on where to start with ‘soft’ standing rigging.  I will give a link to one site i found where one boater who has done it gives a brief run-down on the properties of various modern synthetic ropes and on his own project decided to use SK78 dyneema.  I have had to do a crash course in modern synthetics as most of the changes in rope technology have simply passed me by.   Where i am up to right now is thinking about one rope in the Kevlar (Aramid) group (Vectran) and one in the Spectra (Dyneema) group.  Obviously these are branded trade names so just assume the ‘Tm’ markers.  The dyneema group particularly has been developed a lot since the stuff that i last used.  In fact my last use of Dyneema was a bit disappointing due to its then tendency to ‘creep’ under load.  That wouldn’t be a great feature in standing rigging and was a problem with early Dyneema rope such as SK75.  Since then things have moved on with much stronger variants that creep a lot less.   Some of the recent ones are prohibitively expensive though.     So for this side of the same exercise i have mainly worked from one range and selected 2 different ropes.   The difficulty is that i couldn’t find an actual weight quoted for either actual rope on the same site.

For reference i found the Gottifredi Mafioli racing vectran (6mm) to have a breaking load of  1855 kg which roughly equates to the 5mm wire.  Cost is much higher at £4.60 per metre.  That would make each 8m shroud around £36.80 per shroud just for the line and excluding any fittings. I would assume that i would be hand-splicing or simply using a suitable end knot so there would be no mechanical splicing involved.  Cost of fittings would be slightly higher as i would use stainless steel thimbles.  Total cost of the rope would be around £360 and lets say 14 thimbles extra at around 60 pence a pop we would be looking at around £380 for the whole job compared to £100 for the job done in wire.  There is a weight saving involved in that the average weights i can find for longer rope lengths is about half that of the galvanised wire.  One thought i initially had was to just replace the aft shrouds with some spiffy soft ones but i think that’s a bad idea as they may stretch or creep completely differently to the old wire ones.  What might be neat is to make up the new runners/preventer stays in synthetic rope as that would definitely handle better in that application especially in the reduced chafe.

At this stage i have to be very budget conscious so working out that it would cost around £100 to do all 8 shrouds, the bowsprit stays and the inner forestay in wire is a useful base number and i get little advantage that i can see except some weight saving aloft with the synthetic rope option.  The cost as we can see is something like 4 times greater depending on the splicing issue.  At this stage i am leaning towards staying with the known for the shroud replacement but to use soft shrouds if i go ahead with running backstays and possibly with the forestay and running bobstay idea.               If i go with the wire option which is highly likely i will almost certainly order a hydraulic swaging press and do the whole job myself as that’s the kind of thing i did at Dickies.