Lets get back to talking about boats and their rigs.

Some of my blog visitors will know that at one time i used to race IOR boats and that time culminated in my being afterguard on a group of what were considered at the time as ‘big’ boats ie some of the larger Swan’s, a couple or 3 maxi yachts and at least one Volvo ocean boat.   What all of those boats had in common were big and tall complex multi-panel rigs that put huge strains on the hulls underneath them and some very heavy crew work to get the best out of them.   For anyone who has never been on the running backstays on a fractional rigged maxi during a day of intense match racing can i just say that its almost unfeasibly exhausting bringing the forestay back up to full load on each tack when in a short-tacking duel.

One time i still remember i was navigating the boat that had been Martela of Finland (in her later guise) and we were doing a work-up day in the Solent.  We had beat out of Southampton water and west up the Solent against the beginnings of a big spring tide and enough breeze to have us down to the number 3.  Somewhere down off Slymington we ran off, popped a kite and hooned back downwind with that big spring flood under us.  Memory has it that we were doing about 15 knots over the ground and the owner had a stupid grin all over his face while i rapidly counted down the minutes to our downwind mark.  At some point the skipper (Jaws) made some comment about this boat and my own boat : at the time a 26 foot ply and epoxy self built catamaran with a wacky soft wingsail gaff rig.   I think the point that Jawsie was making was that my boat was at the ‘alternative’ end of the sailing spectrum and the maxi was for ‘big boys’.  I in turn told him that we were doing about the same speed on Martela as i had been doing aboard my little Wharram cat just the previous weekend.  I have to admit that i hadn’t noticed how much wind there was when i came out of the Yealm that day or the wind direction and had set full sail.    As i came out of the entrance in a ‘brisk’ sou-easterly the little cat accelerated up past 10 knots and by the time i hit the full weight of wind i was doing a steady 12-15 knots according to the GPS.  For some reason i didn’t have any reefing gear sorted at the that stage , didn’t feel confident to round up and drop one of the sails so i just hang on and ran like a scalded cat !.  I definitely overtook one fully powered-up Dehler 41 and a planing J24.  I think i had the ‘cool’ to raise my coffee mug in salute as i hurtled past them with spray blowing off both bows. 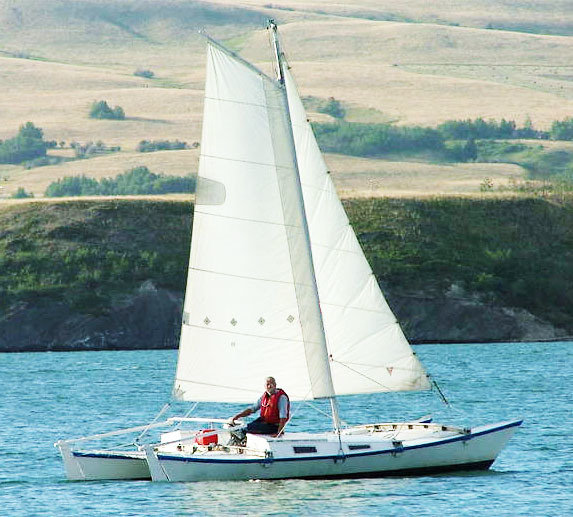 I am pretty sure that boat is the same as the one i finished building ie  a Tiki 26 from the James Wharram/Hanneke Boon drawing board.  From what i know Hanneke did most of the design work and its her Dutch influence in the soft wingsail rig.  The rig is deceptively simple , just a plain round section tube (mine was a hollow wooden one) pair of shrouds each side, no backstay needed and a mainsail that has a sleeve that wraps around the mast and is hoisted by a short gaff.  This version doesn’t even have a boom but is soft footed.  My final version achieved much better jib luff tension and had a fancy double mainsheet system which allowed me much better control over the sail but the basic idea as designed does work well with the boat partially because the boats are quick enough to bring their apparent wind forward and often seem to need a sheeting position which is essentially over then quarter.     The sail does seem to take up a very good aerodynamic shape with the sleeve around the mast but also that the sail shape is a high aspect gaff that has been around on Dutch sailing craft for a long time.   I think its a truly great rig and not as well known as traditional English gaff.

Dutch ‘bojer’ with high aspect short curved gaff, pole mast and large working jib tacked at the bow.  This was basically a working boat rig and much easier to handle than the low aspect English gaff with a long gaff and small headsails. 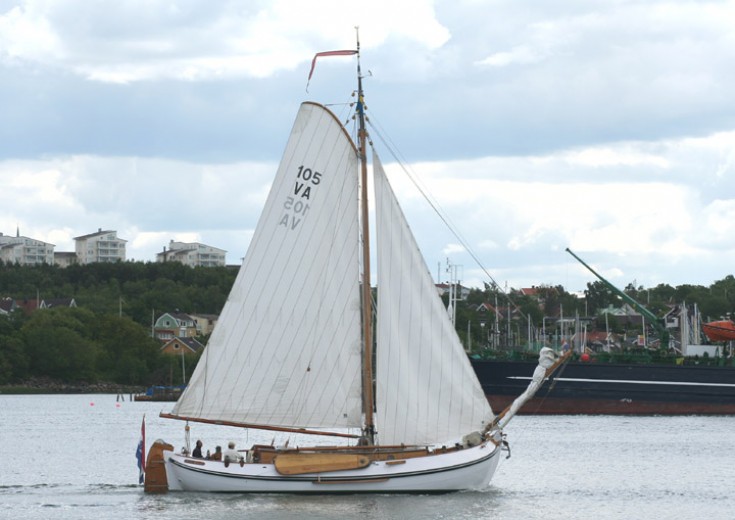 Having sailed with both traditional English gaff (once sailed one with a 60′ boom) and the high aspect Dutch gaff rig i definitely prefer the Dutch version.  The limiting factor of the original boats and rig is that the height of the rig is constrained by the shroud base and therefore the shroud angle .  The Dutch rig is always a pole mast and is never rigged with a topsail to my knowledge.  I have seen both boomed and soft foot versions….booms are much shorter and handier than trad gaff.  Looking at the rig in a modern context it seems as though the Dutch rig is an early version of what we are seeing with the big race boats of today which is to have the mast in about that position, a nearly square topped high aspect main and a big healthy powerful jib + bowsprit to hang more cloth on.

These 2 are both longer boomed and slighty lower aspect than the some.

Once again the JW version.

Having owned one myself i would like to do a thread about designers James Wharram and Hanneke Boon sometime but for now i just wanted to get this thread in to explain the Dutch high aspect gaff rig and its modern counterpart in the soft wingsail rig.  I am going to draw a sailplan for the DD using the high aspect gaff rig and using the simple tube and wraparound sail.  I’m not sure at this stage that i can get the proportions right as the natural mainmast position coule be too far forward to get a good size in the jib.  It does lool possible to sneak the mast foot back a bit and set it directly (dreckly ?) over a reinforced back arch.

Both Alan and father Ted commented on my search for a plain alloy tube or round wooden pole mast for this project.  Alan i think was saying that plain tube might not be the right grade of metal for a mast and i think what Ted was getting at was that a round stick isn’t very aeroynamic.  Traditional gaff rigged masts are usually round so that the gaff jaw or saddle can rotate around them and that is the case with both the traditional Dutch boats that i have seen and with the Wharram’s.   I’m not sure that the metal temper is as critical for the mast as it seems that most of them are over-spec to begin with because they don’t have much if any centre support (no lower shrouds).  In this case a 3″ tube is almost certainly over-spec (depends on wall thickness obviously).  One sailmaker that i know of is familiar with making the gaff mainsails with their soft sleeve : one oddity that actually works is that on the small boats the actual sail is completely flat rather than broad-seamed but they still take up a good shape.  Airflow round the mast seems fine as the sleeve works a bit like the first part of a wingsail.