Setting up my glue station.

A few weeks ago, in real time, i cut the bevels for the bottom panel’s plywood scarf and because it was a nice warm and dry evening i went straight on to bonding the 2 panels together. To do that i lined up the first panel with the edges of the supporting deck which is also a sheet of heavy plywood….and with the scarf edge roughly halfway along the ‘deck’ : then, for a dry fit and check i just slid the second panel up to the first and lined up the scarfs trying to get the 2 faces as close as possible without one sliding up and over the other.  Checks complete i separated the panels again and cocked the ‘upper’ scarf panel up on blocks, made up a batch of epoxy and brushed that onto both bevels first before making up the rest of the batch with microfibres to make a glue mix. Once i thought that the bevels had taken up as much resin as they were going to i spread out the glue mix just on the bottom bevel, moved it around until i was evenly thick and then pushed the upper board/bevel back into position.    The final stage was to clamp both boards to the deck making sure that the sides all aligned and then weighting the top board’s bevel edge down onto the lower one with a stack of weight plates.

The scarf glue station….the green plastic stops the plywood sticking to the deck and the orange plastic does the same for the weights.  In this case the clamps keep the bevels in alignment and in contact and the weights push the top feather edge onto the lower one.

For the main part of this post i want to talk about using epoxy resin for my boatbuilding project and where my main intention is a beginners guide to using a 2 part epoxy and some of the problems in using the stuff.

What i didn’t say above is that it was a lovely warm evening , i was under the shelter which was still in full sun and even a small amount of mixed epoxy was even then starting to warm up rapidly in the pot in my hand….partially i guess because it was a warm day and partially from the heat of my hands ; for those that don’t know this the chemical reaction between the resin and hardener, which forms a polymer or plastic like material is exothemic…..it gives off heat as a by-product. That reaction can ‘go critical’ just like a little nuclear reactor when there’s too much warm resin in one place……the first trick to know then is to make up the resin and then as soon as possible to spread it out, that will become crucial later on when i’m using much larger amounts.

This morning i was working under the shelter getting ready to do some epoxy bonding and by mid morning it was so warm that a small amount of epoxy went off – exothermed….in the pot shortly after i mixed it up although by the time that happened i had already spread enough on the parts i was working with to get a bond.   I think that as the summer progresses and i do more construction and bonding operations that i’m going to have to alter my timing and do glue work either early in the morning or in the evening….the problem then is the late afternoon sun coming straight into the shelter.

So……for those readers that know their epoxy please feel free to go and make something, for those that don’t please ‘stick‘ around……ok i’m sorry but a pun is a pun right ?

2. For those that don’t know their way around epoxy resin it’s been around since the 1960’s but only common in boatbuilding since the late 1980’s. The 2 common brands in the UK are West System and SP System (Structural Polymers) and similar in that they both use a mixing ratio of 5 parts of resin to 1 of hardener although as far as i know the 2 systems aren’t compatible. Epoxy resin once made up is really only used for pre-coating end grain , as i did above, for bonding glass cloth onto plywood , for coating the plywood with and then for mixing up with dry solids to make glue and/or filling mixtures. In the first section i basically described a 2 part bonding process where i first coated the plywood scarf with mixed resin and then made up a stiffer glue mix with cotton microfibers. Epoxy resin is both temperature and humidity sensitive and only works well on a dry substrate (wood) and even then doesn’t work on all wood types : English Oak for example doesn’t take a reliable bond due to the gallic acid in the oak. Too much resin and too warm and the mix will ‘fizz’, too cold and it won’t cure, too wet (substrate) and it will only make a poor joint that can out-gas as it warms up which it will one day. Epoxy joints can also ‘creep’ under load if they have been made at a low temperature and get too hot in the sun……aside from that it’s messy and nasty stuff to work with, highly allergenic and dangerous when it’s partially cured !. Aside from all of the above it’s the godsend of every backyard boatbuilder on the planet.

3. It’s a really good idea to keep the resin, hardener and all of it’s powders and tools away from everything else including skin…..in my case that’s why iv’e gone to the trouble of making a mobile epoxy station that i wheel out of the workshop when i want to glue and why in the past i used a completely separate bench to glue up on. For this project i shouldn’t ever be gluing up on my workshop bench even when i make the frames from the parts i have made so far….they will all be made up on a temporary glue station outside as will the centerboard and rudder which will be laminated up from many pieces.

My epoxy trolley before adding a work surface and organizing the various powders and fillers into kitchen containers. Used gloves and mixing sticks go straight into the rubbish bag on the side. The big cans of resin won’t be stored on the trolley as they will get far too warm, instead they are stored inside the workshop on the cool granite floor. I might adapt my set-up to include a slab of granite or similar and cool that in the freezer at home….and then stand my made up glue on that to slow down the chemical reaction and give me a longer pot time/working time.

In a follow-up post i’ll detail the epoxy trolley set-up and what i keep on it. 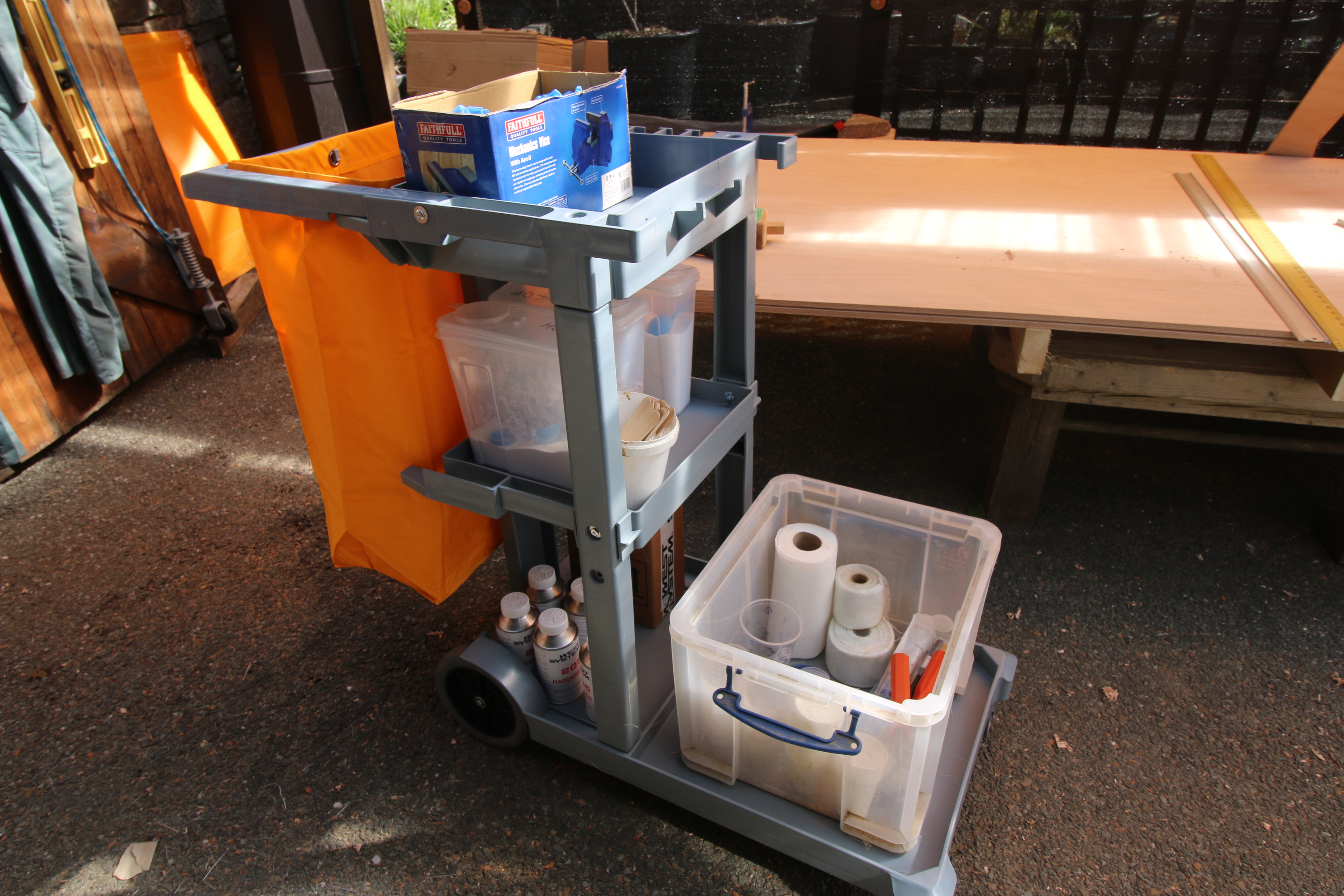 3.  Epoxy joints are slippery when wet !

At this stage of the build i’m just starting to build the frames from the stack of parts and yes, they are all numbered and marked !……anyway, to build each frame what i have to do is clamp and glue flat plywood pieces together and of course they have to line up at the chines and edges and stay lined up as the glue sets.  One of the big problems with panel on panel joints is that they want to slide around on each other and clamping often makes it worse, especially if the clamp is slightly off vertical or if there are any bulges in the thickened glue.

As with the processes and techniques that iv’e used so far – marking out and cutting out for example i’m going to have to glue lots of things together and get them in perfect alignment every time.  I think that what i’m going to do is dry assemble each frame, lightly screw the pieces together to hold the alignment and then clamp and drill through both parts with an 8mm bit and set a dowel through both as a locator peg.  The screws can then come out which stops me having to use any lanolin or releasing wax on the screws.

Cleaning up the joints as soon as possible after gluing up is crucial because any resin drips or blobs harden very rapidly and a sod to get off the wood once they have set.  In the past i have tried taping off around joint lines with masking tape but generally speaking i can’t get masking tape to stick well on dry plywood so it’s a matter of scraping off as much epoxy from around joints as soon as possible with a squared-off mixing stick : although that seems to take for ever at the end of a job it’s far quicker then letting waste epoxy set and having to chisel, grind or sand the blobs off afterwards.   I’m a bit naughty when it comes to epoxy because i’m only mildly sensitive to it thus when i’m gluing or filleting i’ll often finish a glue line by running a bare finger along it to smooth the glue out – that gives a much nicer finish than a nitrile gloved finger possibly because the skin is smoother : anyway, once iv’e finished i wipe off any tools and my hands with methylated spirits (denatured alcohol) and only then soap and water.