Micro-cruisers part 4, how small can you go ?

Title photograph : Fat Bottom Girl at the start of the Everglades Challenge.

In this post i want to explore a simple question and idea : ‘just how small can we go in terms of a boat and still go cruising rather than just going out for a day-sail’ ?.   For the purpose of this boat i would like to define cruising as to include going somewhere, anchoring, cooking a proper meal and sleeping comfortably aboard the boat.

Let me begin with a short sea story because it was indeed a dark and stormy night ; proper dirty in fact.

It was early in the season, in fact i was the only boat out on the water or so i thought and i had chosen a narrow weather window to sprint from my usual mooring high up the tidal Tamar, downriver, out of the sound and along the coast to Fowey where i intended to leave the boat for a few days.                  What happened was that i got down to Plymouth sound with the tide still on the flood but once i got over the bridge reef there was already a steep chop in the sound and disturbingly waves breaking right over the breakwater so i turned around right there and high-tailed it back through the narrows on the last of the tide and scooted back towards the Lynher.     Just to say for readers who don’t know the area that the western entrance to Plymouth sound can be a very uncomfortable place during a spring ebb and potentially dangerous when there is already a swell from the south….as there was that day.

Once i got past the Tamar ferry’s and the naval dockyard i ran off west into the Lynher with a brisk south-easterly pushing me along, that made my usual anchorage in Sandacre bay enough of a lee shore to be unpleasant so i carried on past the Jupiter narrows and found the north channel past Ince castle and Tredown lake at which point i had to come hard on the wind to make south-west towards the deep water channel off Dandy hold.  By the time i got that far the ebb was running hard against me and i had to motor sail to not be pushed onto the southern mud off Warren point…..i remember being exceptionally cold when i anchored right inshore up against the high ground of the western corner of the Hole : as soon as the anchor was down and my boards up i got the kettle on and snuggled down inside my heavy winter sleeping bag.   It’s a strange thing but i do seem unusually susceptible to hypothermia, something i found out the hard way early on in both my mountaineering and sailing life and which i later decided was problem enough to warrant fitting a pansy stove on the Liberty. 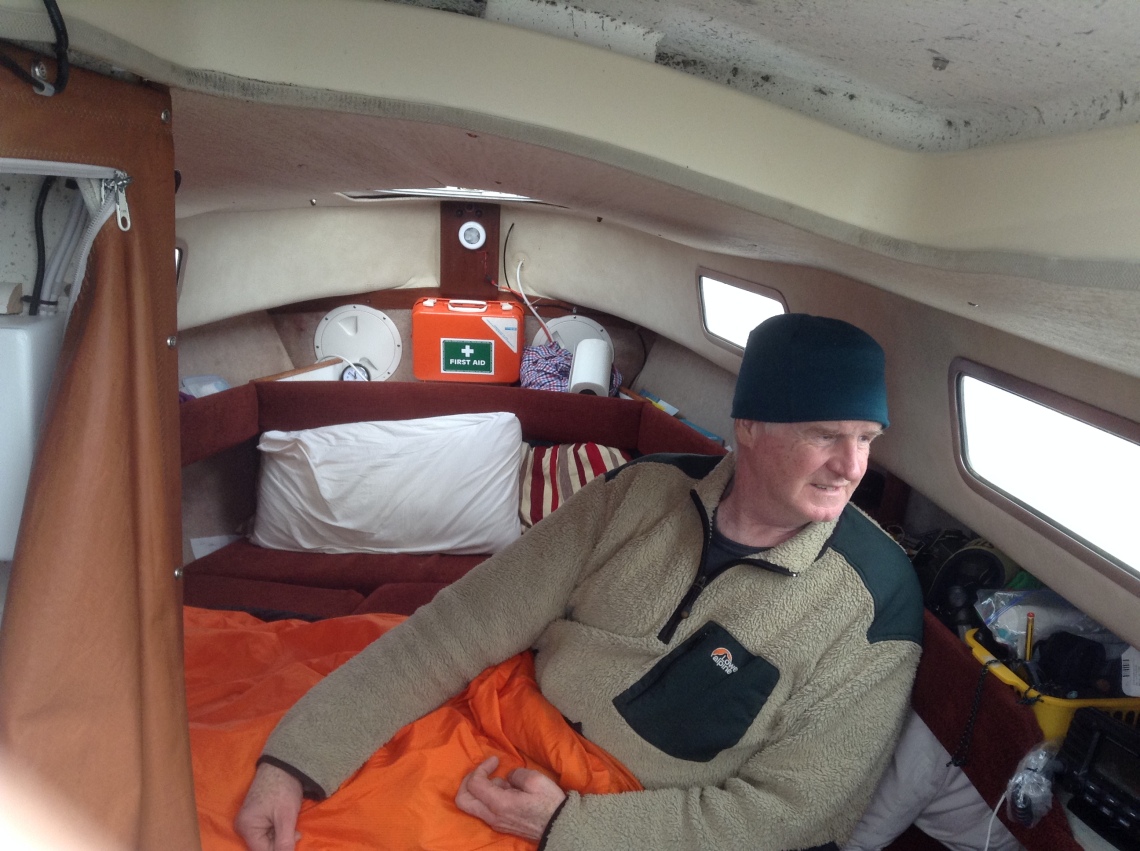 It was indeed a dirty night and even tucked in under the high ground the little Liberty was still sheering around, mainly from hard gusts that were coming over the high ground upwind of me but forming strong eddy’s at water level.  Eventually the boat settled with one bilge runner just in the mud, i warmed up enough to start making a meal and i thought to listen to the next couple of shipping forecasts as it seemed to already blowing a lot harder than i expected : it was a bleak and uncompromising forecast with ‘Gales all areas’ .  As it turned out i was pretty well stuck right there for the next couple of days before i gave up and bolted back upriver : it was on the second evening that something really quite interesting happened though.

Sometime during the second day i shifted my berth slightly because we were on falling tides and one gale turned into a succession of depressions sweeping over the whole of the country….still ‘gales all areas’ except somewhere down near the Spanish coast where it was only blowing a force 7.  Anyway, that evening i was sat in my usual position watching the bleak view of grey river and sky slowly pan from Warren point in the south to Redshank point opposite where i was now anchored. As the view panned back to the south i noticed a small white shape emerge from behind the high ground of Warren point and the shape turned into a small pram bowed dinghy with a short mast, no sail up and it’s driver rowing steadily for Redshank point where he landed and started to unload his gear.  Later on and i noticed that he had set a low tarp as a bivouac and later still i saw the glow of his camp fire rise and fall with the gusting wind.

Iv’e done similar winter and spring camps myself with minimal gear and at one time from an open canoe  but always in sheltered woodland , in fact iv’e been a lot warmer and more comfortable under a simple tarp next to a small open fire than ever iv’e been inside a small boat in early spring.  I got to thinking that firstly i really needed a stove to make my winter and spring cruising more comfortable but also that it might suit me very well to just have a much smaller craft and do the same kind of thing that the bloke with the little white dinghy was clearly doing and seemingly doing it comfortably…at least in bushcraft terms.       Just to add that i thought that the little dinghy was either a Mirror design with it’s pram bow or something very much like it which made me start to wonder just how small i could go and have a viable cruising dinghy.

Skerry ‘Raid’ i think…..photographer not known. 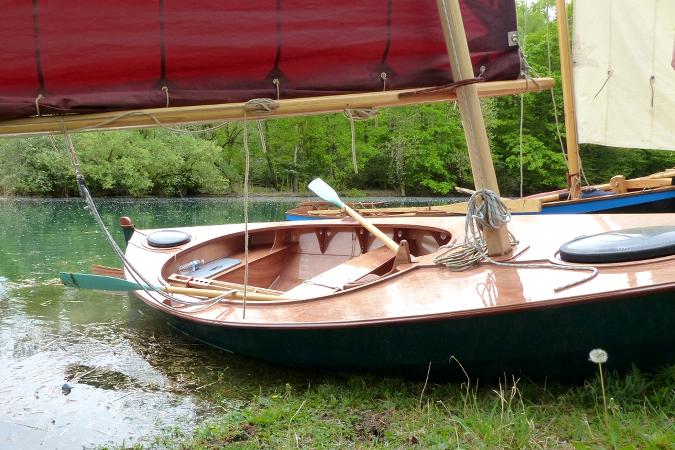 At the time, i thought i was going pretty small with a 22 foot centerboard boat as my cruising boat especially as i fully intended to cross the English channel in her that summer, now, and i think very differently about small boats and i’m pretty certain that i can make a viable cruising boat out of a much smaller boat than that.   Since then i came across one short video clip of a Mirror dinghy being used as an actual cruising dinghy and it did look sort-of awkward in that there was so little space in the boat as to make any function, like sleeping or cooking for example, very difficult.  I thought at the time that maybe there was a certain length and beam below which a boat just wouldn’t work and of course i was immediately confounded in that view by the ridiculously short record breaking boats that seemed nothing more than ‘stunt’ boats.

I’ll freely admit that i know next to nothing about boat design and also that knowing that i know that i set out to try and define the parameters which might determine how small i could go and make a functional everyday boat.   To demonstrate my full level of ignorance i set out my basic set of rules thus.

1.Speed is based on waterline length and we need as much of that as we can with a displacement boat if we’re going to get anywhere.    (I don’t know where i acquired the idea but somehow i think of 14 feet as being some kind of lower limit).

2.Stability is a function of beam, thus a wider boat is initially more stable but increasing beam beyond a certain point makes for a very twitchy boat and often one that broaches easily.

3.Fine (sharp) bows cut through waves upwind and wide quarters give the boat something to sit on when reaching and running fast.

5.Functionality in a cruising based dinghy would have to based on as much length as possible to get speed and therefore passage making ability, beam enough to be stable and equally length and beam enough to give working space.

Now…….i can feel a whole internet load of actual and would-be experts out there rightfully decrying my lack of knowledge and well, fair enough, i’m just an ex nurse and boat driver who has an interest in everything that sails (except Westerly’s of course) but you can probably read into my design (lack of) knowledge that i came in through the back door of yacht design when everything was a bit ‘IOR’.  Go take a look at the kind of boats that i used to think were super cool and you’ll be looking at something like a Farr one tonner from the 1980’s , the fine bow, wide arse and suchlike : in fact that whole design blind alley kind-of culminated with another type of race boat that i used to take a lot of notice of…the 6.5 meter Mini-Transat yachts.   Look at one of them and it all becomes clear….both what the designer was trying to do with the rules and the problems he was having – how for example to marry that ultra fine and sharp bow with that ultra-wide stern without ending up with something that just looks like a triangle from below.     Ok, lets take it one degree more extreme…..for a while now iv’e toyed with the idea of using a retired racing dinghy as a small cruising dinghy and one boat that i always liked the look of is the old Merlin Rocket : having mentioned boats that are ultra wide for their length then consider this design which measures in at 14 feet length and 7 feet 2 inches in width, and yes, i thought that if you would go cruising in a Mirror Dinghy at 10’10” length and 4′ 7″ beam then why not go cruising in a longer and much wider Merlin ? 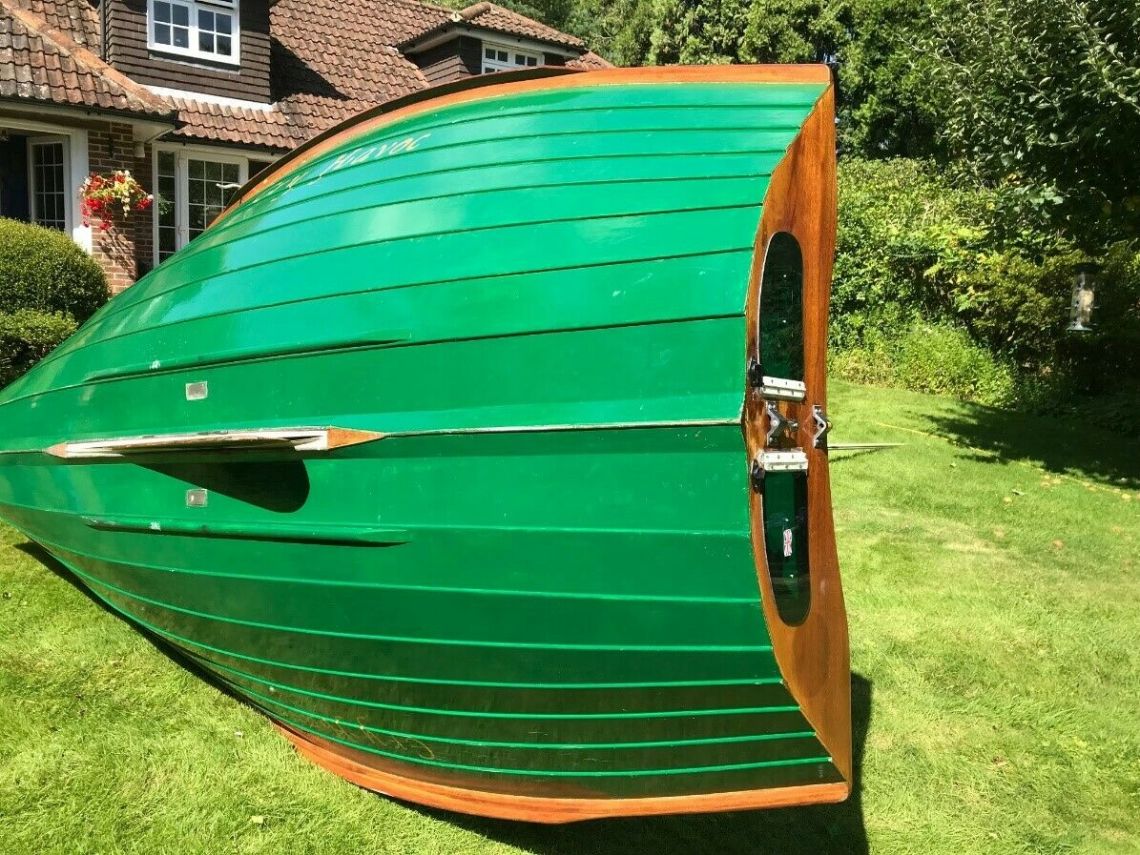 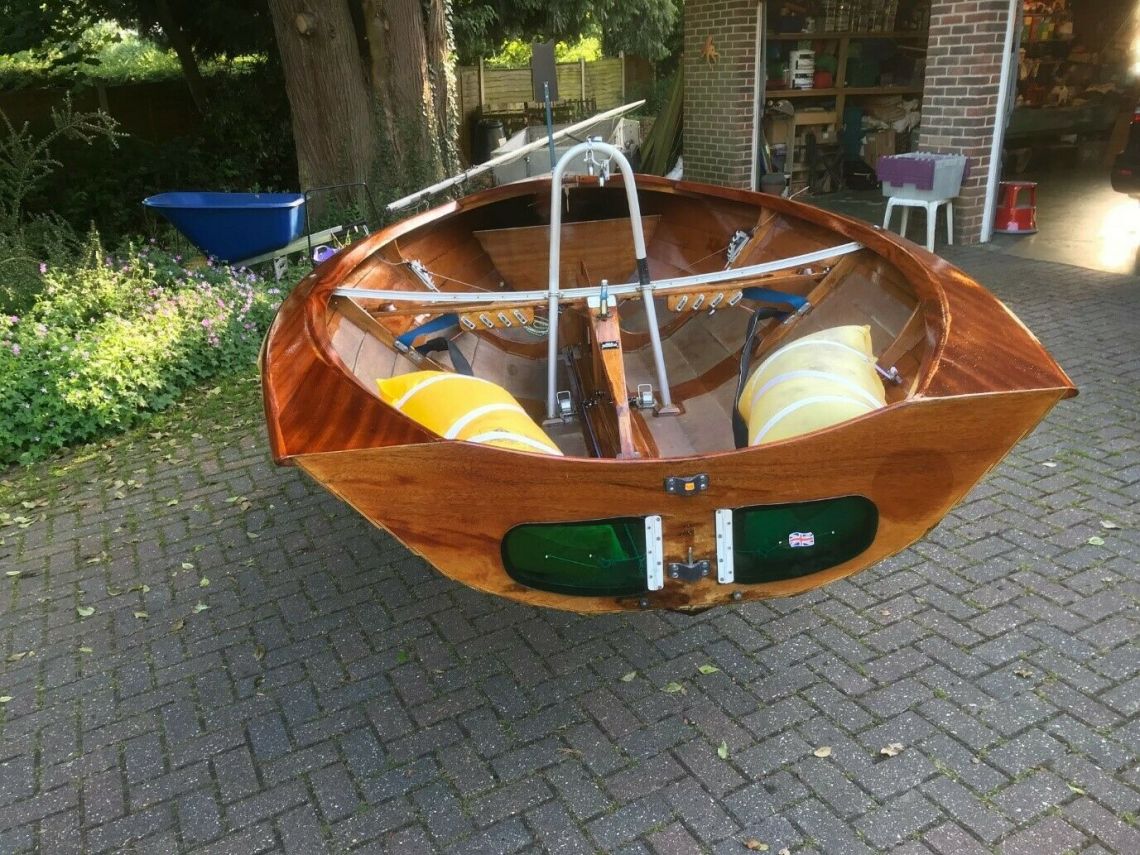 Alright, it’s a completely bonkers idea anyway except that i was recently talking with a sailor who used to cruise in a National 12 so i might say ‘why not’ …… and anyway my main point is less to do with ‘Cry Havoc’ (great name btw) and more that it’s maybe a design blind alley and maybe we could come up something far more effective by throwing away my ‘rules’ and starting again : how about a completely different shape for instance and getting rid of having to force sharp bow to meet wide middle ?. That’s just one design problem and consideration with conventional boats , a second one that i found when i briefly messed around with an old race boat was that the centerboard case was always in the way ; not just dividing an already small space into 2 smaller ones but often 4 or more spaces and confounded even further by thwarts and sail handling gubbins.

I happen to think, but can’t prove the point, that maybe an overall length of 14 feet is the practical lower limit if i stay with a conventional shape and an equally conventional boat layout, below that none of the available spaces on the boat seem to work for laying down in, working in or even sitting in. At 14 feet there are conventional boats that might be made to work very well – thinking here of chunky cruising dinghy’s like John Welsford’s Navigator (study plans on my desk right now) or even something like a retired Merlin with some major surgery carried out….how about moving the centerboard off center for example to create a single working space…..and did somebody say leeboards ?

In the second part of this 2 part post i’m going to try and back out of the sharp bowed blind alley iv’e gotten myself into and continue exploring the world of smaller sailing boats…..until then iv’e got a whole load of study plans to have a look at and projects to cost up.

Catch you all with part 2 next week i hope.