Blog time : December 2020,      On my desktop i have a whole file of images of many of the boats that i like and mostly taken from the internet, most of those now are of the kind of boats that i’m considering for my own small boat project : be that an old Merlin Rocket to build a ‘pocket rocket’ from or an already established miniature expedition style boat.   I note that most of the latter boats come from just 2 designers : John Welsford and Francois Vivier, while i’m leaning heavily towards John Welsford’s ‘Walkabout’ design i’m also strongly taken by one of Vivier’s more recent boats and one that’s taken time to track down.  For this post iv’e had to ‘borrow’ all of the images…..none are from my own files, just to make that clear at the outset.

I first came across a Francois Vivier designed boat when i watched one of Roger Barnes’s enjoyable dinghy cruising video’s and later bought his own book about cruising in his Vivier ‘Ilur’ design.  While i enjoy Rogers video’s it was in trying to read the 10 point print in his book that showed me that i need reading glasses !.    At the time i was just beginning to think about having a home based dayboat and Ilur kept popping up as a potential home build solution, in the end i think i made a logical decision with the Devon Dayboat/Yawl but that soon proved to be the wrong boat…..nothing lost, i sold her on as quickly as i bought her.  I kept Ilur in mind and then went on to look through Vivier’s catalogue of designs and today it’s a more recent design that i prefer….the boat in the title picture.

Some of the 2018 contenders for my project….Devon Yawl and Drastic Drascombe’s in Wells Norfolk.

Fast forward a few years and i think i have a much better idea of the kind of boat i want and what i want to do with it, where in the past i would have automatically gone for the DY in the foreground for it’s more muscular shape and powerful rig i’m now much more drawn to the Drascombe even though it’s nothing like as good a sailing boat.  In the same way that John Welsford’s Navigator and Pathfinder designs are more ‘like’ the DY in being more powerful sea-boats then Vivier’s ‘Ilur’ is similar : a moderately heavy and stable sea boat with a big powerful rig. 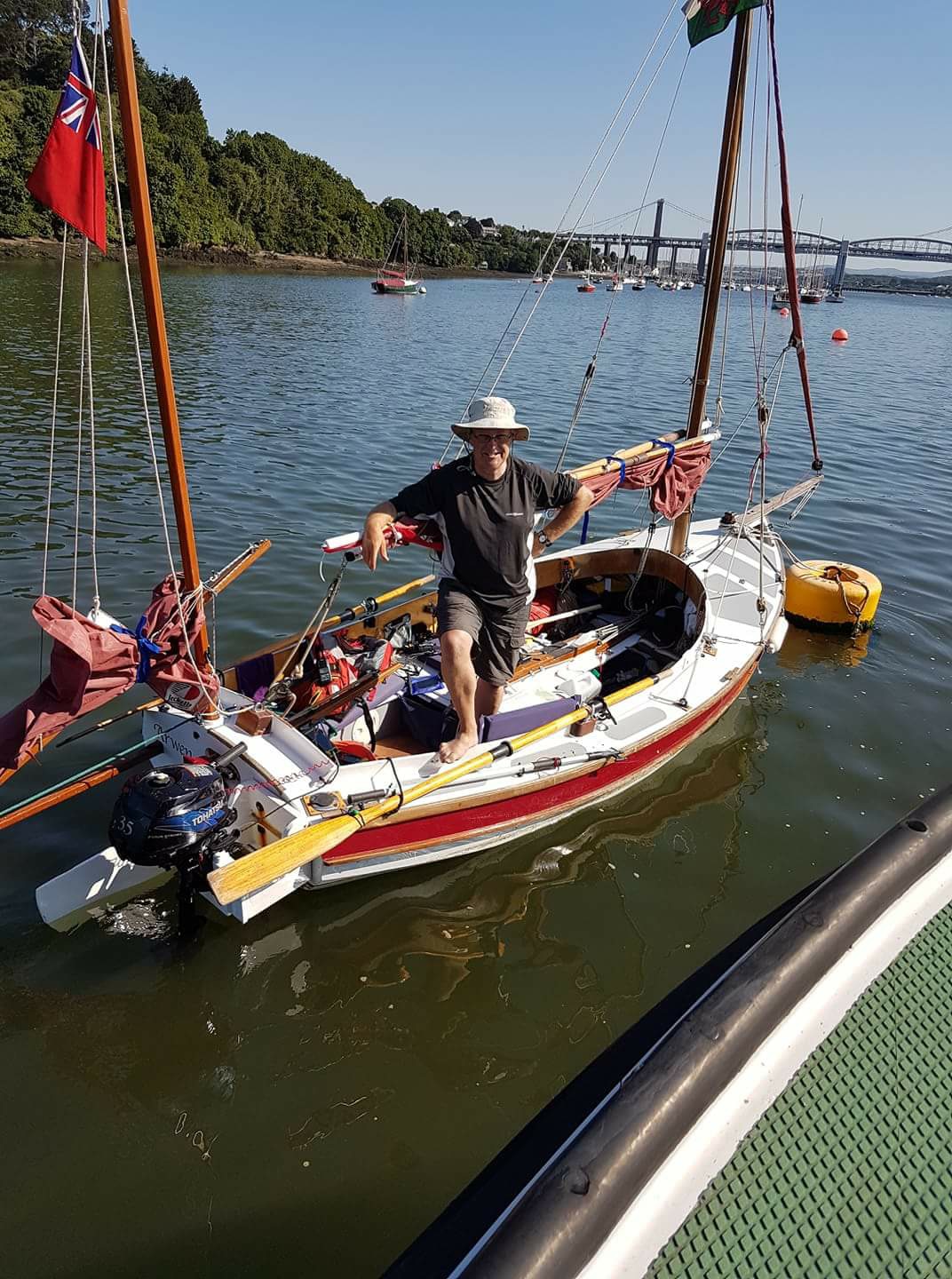 Not the boat we are looking for though….

A few months ago i was watching one of Roger Barnes’s recent video’s from a small craft challenge event in France and a smaller/leaner lugger caught my eye.  I asked Roger if he knew what type the boat was and he didn’t know but it may have been this boat which is a Francois Vivier design for sail and oar ‘Creizic‘ but which doesn’t seem to appear on his design wesbite….i found it on the Woodenboat forum.

I think you should be able to see what i am getting at here, visibly a seaworthy boat but a simple one and that has the right elements of a decent sized rig, not so wide that it can’t be rowed and all at the right size for one person or a couple.

Sweet looking boat too, if i may say. 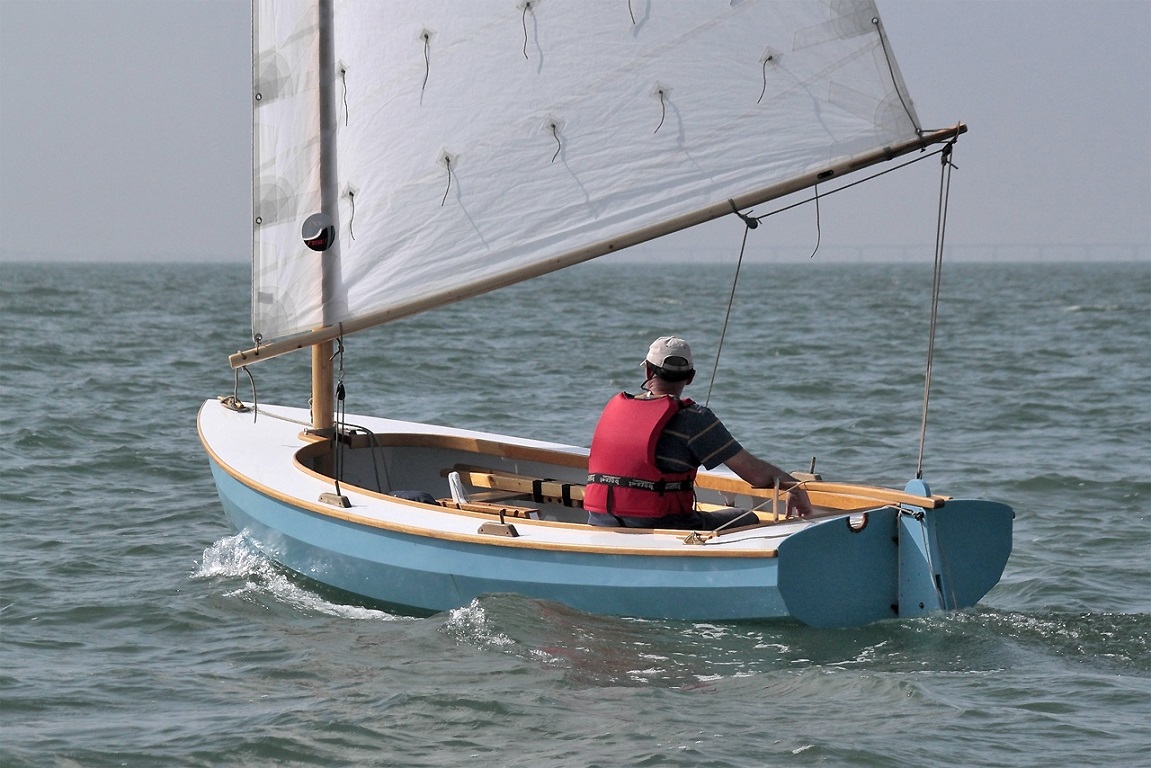 As visitors to this site should be aware i have really enjoyed my cruising around mainly parts of Brittany , i don’t know other parts of coastal France as well aside from road trips down to the Vendee and the wild coast of Les Landes.  I think i can see, in many traditional French boats, derived from working craft, just how much that place has shaped those boats and just how much that small sailing/rowing craft are still respected in Brittany .  In L.Aber-Wrach i often used to see the same boat, a powerful looking Lug rigged dayboat a lot like Vivier’s  Ilur, scull down the river of an evening and then ghost back up on the tide.

Now, there is an entire small craft sailing/rowing scene going on in France that i know very little about other than what i have seen via Roger’s video’s , internet imagery and what i can glean from online versions of the French sailing magazine ‘Chasse Maree‘ that seems to be the major driving force behind the various small boat based festivals and organised ‘Challenges’…. a bit like ‘Raids’ but with a more party like atmosphere (and bloody awful music !).

As well as lots of individual small craft sailing there also seems to be 2 distinctly different kinds of larger organised events ; firstly the various river and coastal town festivals like the one Roger filmed on the Erdre and secondly a more ‘Raid’-like ‘Challenge’ event called the Naviguer Leger.   It’s within Roger’s video of the Naviguer-Leger event that the pretty blue boat first appears although it does so initially as a Yawl rather than the single stick Lugs’l above….i think it’s the same boat and i’m trying to track down the study plans to put alongside John Welsford’s Walkabout plans.

I’m still a fool for a nice double-ender though !  (Arwen Marine photograph i think)

And then there is the Dutch boat !……

Iv’e been looking at this boat on and off for the last few months but for the life of me i can’t find anything else about it other than that one was built by it’s owner in Holland and after that the trail disappears.