Lesconil : I couldn’t even think of a silly title for this one.  This post is so sensible that the title photograph even relates to the post.

WABI’’’ Real time : at anchor Anse de Lesconil about 50 yards off the beach.

It’s mid June in south Brittany, raining hard and iv’e got the charcoal stove going !.   I left  my mooring off Benodet very early this morning , a very grey and cool one and with a brisk wind from the north west, I left early because I was awake very early and I was awake due to the rain drumming on the deck a few feet above my head. The rain did ease up but then came back in near continuous showers for the rest of the day.  During the short passage from Benodet to the ‘Enizan’ mark , the mark off the south-east Lesconil reef I had reefs in and out every half an hour or so as squalls and showers came through.

I wanted to visit the bay (Anse de Lesconil) and small harbour at Lesconil on the way past when I made the passage from Audierne past the Pte de Penmarch but didn’t because the wind direction I had then would have made the anchorage uncomfortable. The Anse De Lesconil anchorage does have good shelter from north west through to east but is wide open to the south west.    On our second trip through there I actually anchored in a small clear spot, a sand gulley, between 2 reefs which put the ‘Men-ar-Groass’ reef directly to windward.

Although it is feasible to go into Ste Guenole or Guilvinec harbours both of them are principally working fishing ports : iv’e seen both of them during a road trip and both are bleak, industrial places.  I don’t ever remember visiting Lesconil during that trip which is odd because it’s much nicer than the other 2 : much more a town built around a small working harbour but one that’s just as happy with a few visiting yachts as well as the local fishing boats. It’s the kind of place I much prefer when compared to Benodet : a small and unfashionable working port rather than a samey-same modern marina and major tourist town.

During the passage along the coast from Audierne I had wind mainly from the west and south west which would have made the anchorage in the Anse De Lesconil very rock and roll as the anchorage is open to the south west . It does have very good shelter from north east to north west though, so with northerlies promised it was a very good opportunity to visit and use the anchorage.  The usual spot to anchor is about halfway along the beach as seen from the way in and of course in however much water you need.  I did think about running up the beach on the ebb but missed my time/tide slot by having an afternoon kip…next time maybe.

In terms of sailing and navigation it felt much more like being back on the western Brittany coast with lots of rocks and reefs to dodge.  The whole of this headland from the Pte de Penmarch eastwards and all the way around to Loctudy  is a maze of breaking rocks and exposed reefs although well marked and in fact I found the route into the Anse de Lesconil quite easy.   Like western Brittany the feel is that of being held off the coast and it’s tempting just to zip past the hazards well offshore and just marking off the waypoints as they go past.  Going in to the Anse de Lesconil isn’t difficult by day from the east as the reef to the south east of the bay, while extensive, is very obvious.  The useful piece of pilotage I can offer within the bay is that the best anchoring area is between the main, outer reef to the south east of the bay and a shallow reef in the north east  (men ar groas)* : the line into the anchorage is almost directly north east of the Men Caes marker.

‘Enizan’, reef to the south east of Lesconil….no white marker !  On my chart a couple of the high rocks are useful micro-navigation guides to position .

I did have one problem which I met before and that is on the crucial corner where I would turn west after the bay of Benodet : close in to the rocks marked by ‘Les Bleds’ ….of note also is that the same marker is now just a concrete pillar with no visible colour bands and no south cardinal marks on top.

There is a large area of small surface buoys like pot markers all linked by surface lines.  I accidentally sailed right into a trap this time and had to do a 180 degree turn to exit them and then go inshore and pass the reef to the south east of Lesconil much more closely than I’d planned.  I have no idea what the surface buoys and lines are there for , they are marked by some conical yellow buoys so it was my mistake for not working out what they were marking until I was in with them.  It is one of the features of navigating around the smaller ports that you have to get in amongst it all….the rocks and reefs.    It’s quite normal to see the local guys working right up against the reefs, in fact a useful guide can be their pot markers.   As I said already, most of it is well marked although I also noted that the crucial white mark on the southern corner of the Lesconil reef (Enizan) seems to be missing !. Going round there I almost used some ML style micro-navigation to work out which high points of the reef I was looking at as a couple of the high bits are usefully noted on the chart.

Ex fishing luggers in the harbour at Lesconil.

As it was exactly a neap tide but with a fresh nor-westerly blowing I decided to go in very close to the beach and anchor in just 10 feet of water near to high tide.  The water was absolutely clear over clean white sand and when the weather cleared a bit I could clearly see the darker areas over the shallow reef in the north-eastern corner (Men ar Groas)* of the bay as well.  I got tucked in as close as I could and it was still a bit roly-poly so I used the reefed mizzen as a riding sail for most of the time. The rain did clear away later on and I then had what I think is a beautiful colour combination with soft light green water, almost white sand and a gentle grey sky above…..although golden light underneath the grey…anyway less of that arty nonsense ! It’ll never come out in the photographs. 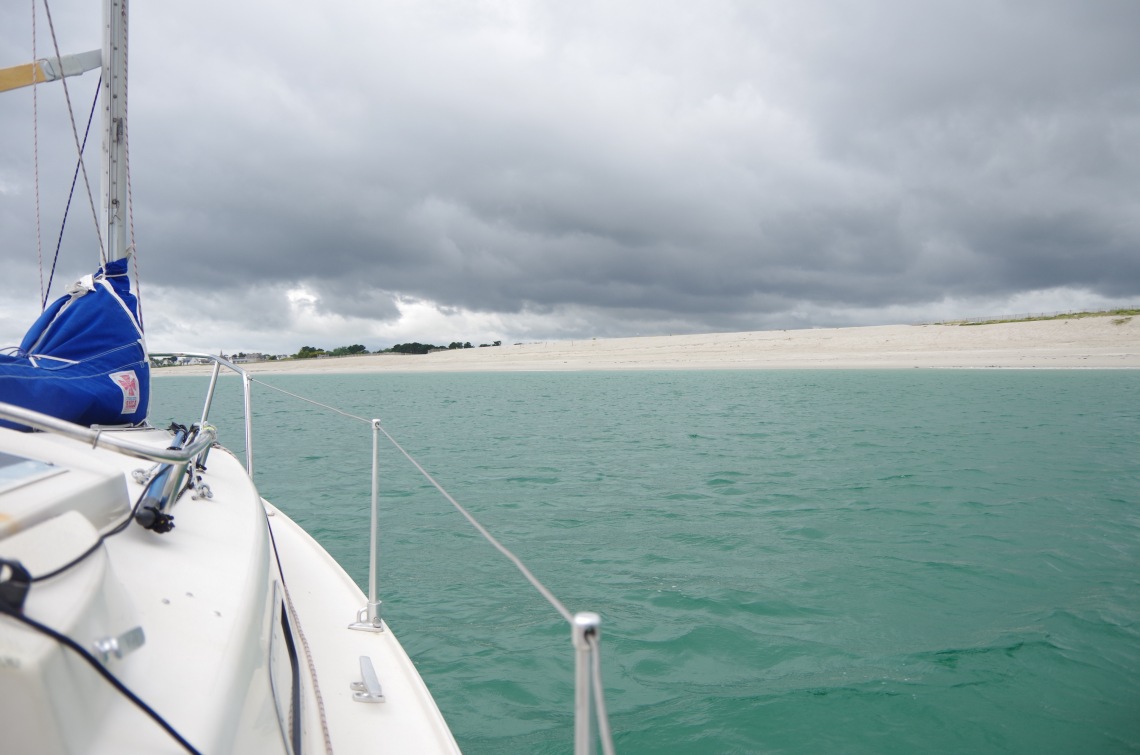 There were 2 places that I really wanted to take a look at in the bay, the small harbour itself and a what looks like a small river inlet right in the north east of the bay.  At anchor I didn’t have either the height or the angle to see whether it was possible to get into the river/inlet because there was a reef in between it and me.  After a very nice night at anchor, when the wind died down and the rain stopped I up-anchored on the flood and motored the short distance to the tiny harbour entrance and had a look around inside.  There is a small working fishing quay on one side, a closely packed set of small local fishing boats in another part and then a few finger pontoons for visiting yachts.  I didn’t need to go alongside as I planned to sail back to Benodet the same day so I had a quick look at boats in the inner harbour and then scooted out.  Although I don’t particularly like being alongside marinas I would quite happily come in here if I was passing and the anchorage was uncomfortable. 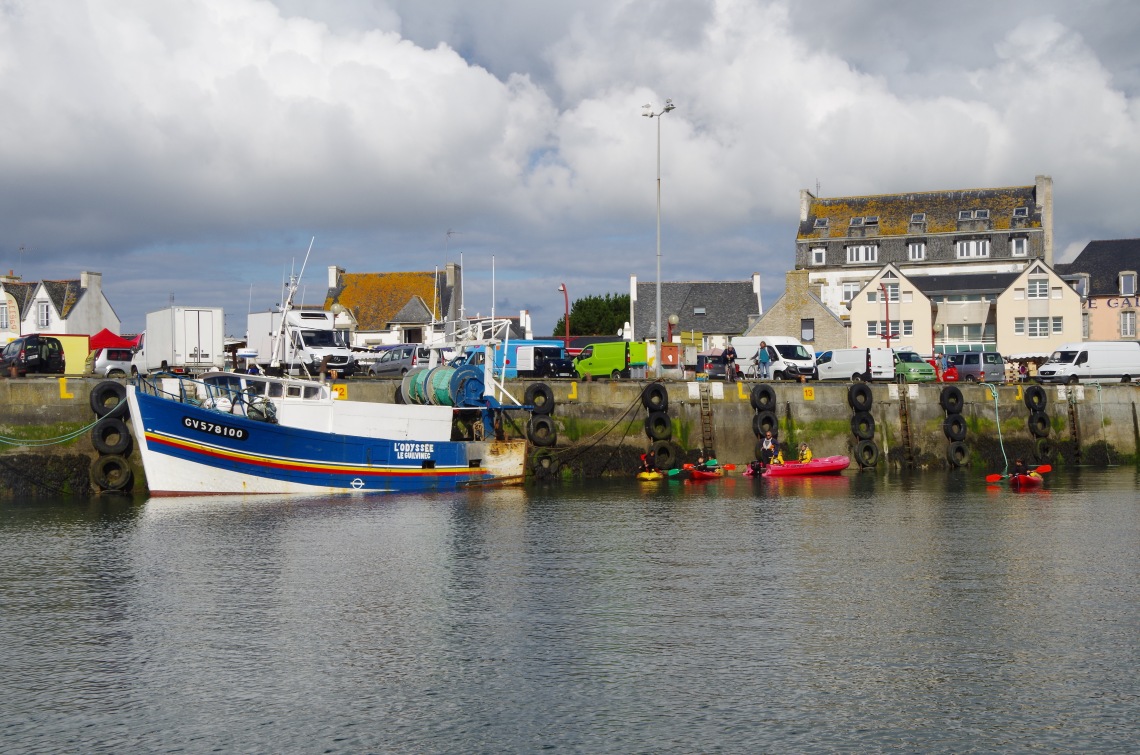 *The MacBook version comes out as “men are gross“…..seems fair !