I didn’t sleep well in the anchorage at Whitsand bay, mainly I think, due to the movement of the boat and the surf breaking on the rocks just inshore of me.   In fact I was awake well before sunrise so I heaved my anchor and ghosted out of the bay on the light wind from the north east. I have found the Liberty to be a good boat for ghosting downwind in the lightest of breezes especially if I can get her onto just a broad reach. Today I set up the tiller pilot for the first time this year, everyone I know gives their tillerpilot a name : mine, by the way is called ‘Dolf’.  I let Dolf do the work while I kept watch, made breakfast and did the navigation.   I thought about bypassing Fowey and making a run for the West Country, maybe putting in at Falmouth first and then the Helford river which is one of my favourite places on this coast.  As I looked aft and listened to ‘dolf’ pushing and pulling on the tiller the sun came up blazing over the north-eastern horizon in a kind of ‘thus spake Zarathustra’ moment. 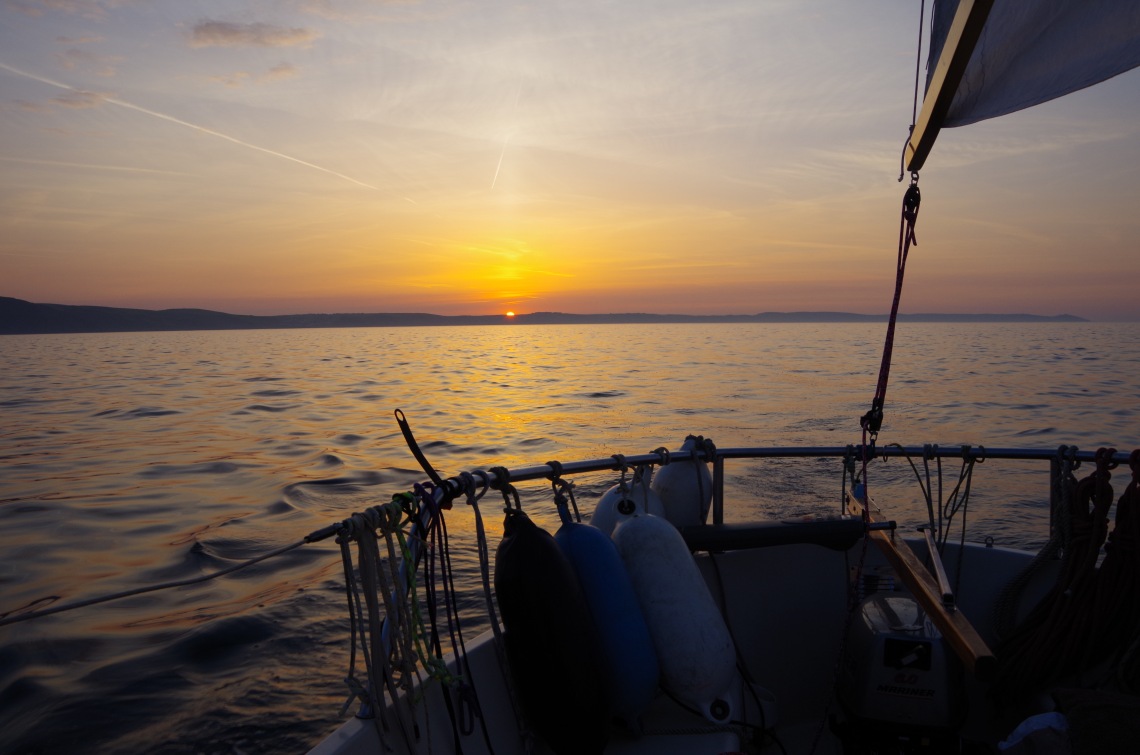 Unfortunately I didn’t hold the light nor-easter for very long so after a couple of hours trying to get downwind in a near glassy calm over an oily swell I gave up trying to sail and motored west, around Looe island ( actually St Georges island) and put into a little bay that I know of but have never visited before.  Porth Nadler is a small bay to the west of the reef that joins St Georges island to the mainland and is sheltered from the west and north….today though with no wind at all it was totally flat and not even the westerly swell was rolling into the bay.  Having seen the bay on foot, from walking the coast path many times there, in fact iv’e even swum in the bay, I know that it’s got a hard sand bottom although there are lines of rocks.  This morning I was a little bit too far to the east in the bay and managed to put my anchor onto the luckily slippery weed covered rock : I had a brief panic when the tip caught and I had to motor out forward to pop it free.

I didn’t spend long in Porth Nadler once I’d retrieved the anchor as the light easterly came up again so I was able to get sail on again and ghost west along the coast again.  Just for fun I motored into the tiny anchorage just outside Polperro harbour : there are just 4 visitor moorings and that’s almost one too many, when I got there 2 were already occupied by much larger boats and one of them kindly backed his stern around so that I could slip onto a mooring.  I guess that Polperro is the quintessential Cornish micro-port, I seem to remember coming here on family holidays and staying in a delightfully quirky cottage almost on the harbour front.    Today though the swell from the west or south-west was funnelling into the little entrance bay so I cleared out of there pretty fast as well.

There are a couple of potential micro anchorages between Polperro and Fowey but the one place I really wanted to visit was Lantic bay which is normally untenable in ‘average’ weather from the south or south west as the bay is completely open to both.  Today however with just the lightest of easterlies I decided to make that my overnight stop once I had put in there and seen several boats at anchor. As with Porth Nadler I have only been to Lantic bay on foot, once when I was walking this section of the south-west coast path and once again to stop for a swim on a hot day.  Lantic bay makes a very good anchorage in easterlies and northerlies, the bottom as far as I can tell is hard clean sand and the anchorage essentially splits into 2 sections which both front onto a small beach.  Today I chose the eastern section and came in to anchor just as a large motor-sailer seemed to lifting their anchor and moving off.

The ‘Lantic bay antics’ started with the motor-sailer or rather it’s owner who seemed to strongly object to having their photograph taken.  I motored into the bay, camera at the ready and the aforementioned boat made a neat composition with the beach and cliffs behind and I thought “nice one for the blog” until the owner of the motor-sailer started almost jumping up and down in rage and shouting “no photographs”…..now look : it’s a public, outdoors space, everyone had their clothes on and unless I am very much mistaken the owner was nobody famous….although perhaps a bit ‘special’ but not in a good way.   Of course in true paparazzi style I completely ignored Mr special and carried on photographing but mainly the ‘clot’ or ‘thicket’, I can’t think of an apt description of the group of jet-ski’s just off the beach.  I really must make up a proper description for groups of jet-ski’s, solo they are bad enough but in a group they seem to act something like particularly obnoxious football ‘fans’ after 8 pints of lager….maybe crossed with a bit of fat-boy BMW or Audi Driver.   I almost said bikers except every group of bikers that I have ever had dealings with including the Hells Angels themselves are far classier, respectful and better behaved even when they are partying so….. 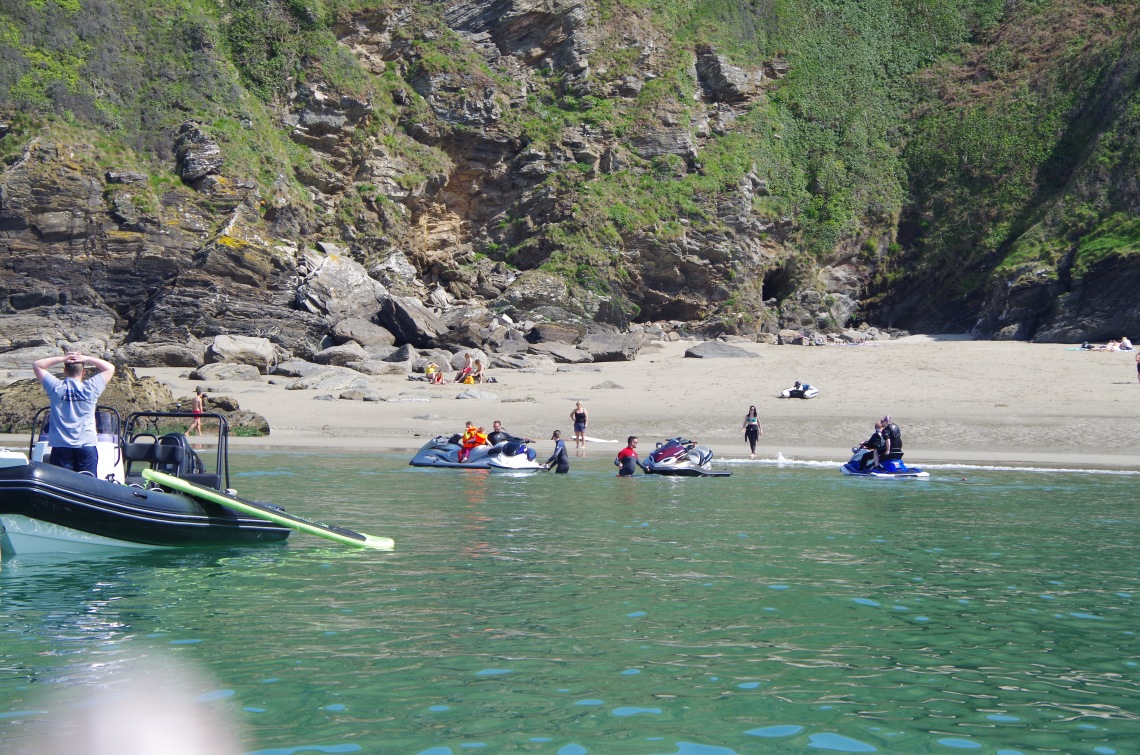 The eastern beach was being used by the usual summer weekend crowd, and it was after all a very nice afternoon so there were people in the water, some great looking sand architecture going on and generally people enjoying themselves….except for the completely annoying and moronic behaviour of the jet-skiers.  I can’t be bothered to describe the whole afternoon except for a couple of characters who really stood out.  One couple, shall we say on the enhanced mid-section and thinning hair spectrum looked totally ridiculous in their skin tight (fat-tight) wetsuits like so many overweight gym-goers in too-tight lycra…..not at all pretty.   The best of the worst was a character I quickly self-named the ‘poseur’ : younger and with a jet-ski that had all the flash graphics a bit like a cross between a track-bike and an overgrown training shoe……well he definitely had ‘attitude’.   His half-hourly routine seemed to be to zoom into the bay, hand on hip, like a badly dressed John Wayne…except that John Wayne never to my knowledge wore sunglasses that gay.   In he would come, dismount, pose around the others for a while and then out he would go again….hand on hip….do a few circles and lots of throttle twisting, revving of the motor and then….yep….back into the bay, hand on hip.  I don’t think I have ever seen a modern ‘matching leathers’ sports-biker pose that hard. 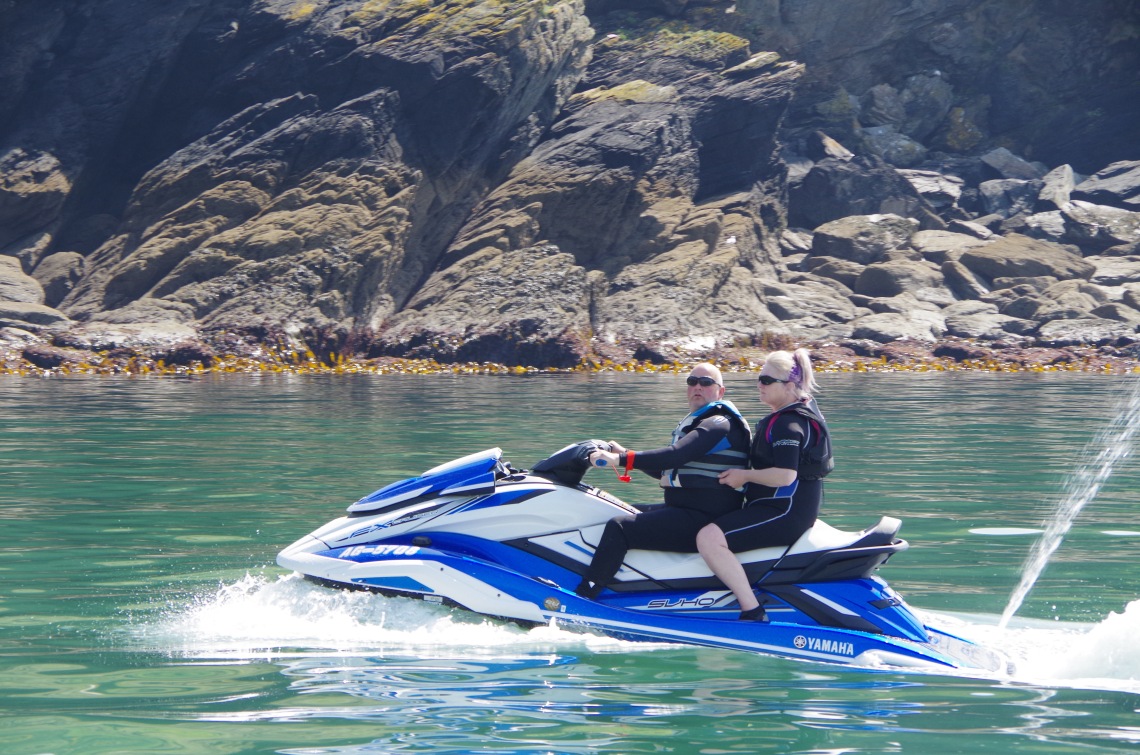 Now, it’s clearly true that I don’t like jet-ski’s or their riders, in fact I totally and absolutely detest them all.  Last year I had a very bad incident with a group of them and that was as nothing to the group, might well have been the same one, that repeatedly charged, soaked and harassed the local ladies team out rowing in their gig.   It’s not just me though, even the other motor boaters in Lantic bay that day, and definitely the swimmers , all quite noticeably found them totally annoying too.  Luckily they seem to have a low boredom threshold and once they have done enough of their manic circling, wake jumping and posing they usually zoom off and hopefully crawl back under whatever rocks they live under.  I kind of suspect that they are the same aggressive knobheads that drive BMW’s, Audi’s and low-slung loud boy-racers with loud cans.

Did they bother me ?, no not really, it was still a nice afternoon and I had a long job list to get through in preparation for the next long passage either west or south.

The next entertainment came courtesy of a couple of young paddle-boarders who paddled over to my part of the anchorage and then proceeded to attempt to do paddle-board yoga !.  The young lady in the rather fetching Pamela Anderson-esque cossie even attempted a full-on headstand combined with splits while staying on the board.  I had to get their attention, indicate my camera in a kind of ‘are you happy to be photographed’ kind of way , they were and later came back again to ask me if I had got any good photographs.  Sadly I wouldn’t know until I could get the pictures all downloaded and that would have to wait until I had the new laptop.  As it happens I didn’t get many useable pictures because of a mistake I frequently made with my older Pentax DSLR : it’s very easy to accidentally move the settings and I had done that so was neither in focus or in the right mode for most of them.  For this trip I am using the older Pentax as my deck camera as it’s more likely to get salt in it’s electrics and I am keeping the newer Canon for video work.

I think, with this voyage I am much more likely to revert to my usual blog output, ie story telling and photograph because that definitely is do-able at sea whereas I’m not sure about being able to store and edit lots of video material.  In the initial set-up of the new computer I have found a way of writing and editing the blog text offline and as I did today, in real time, sat in a cafe, logged onto their wifi , copy-pasted the text into the blog and added the photographs.  All of the photographs from now on will be both my own and new ones as I don’t have access to any of previous files.

Anyway and back to Lantic bay.    I carried on with my long list of jobs, endless details, to make ready for a channel crossing in the expected light easterly.  The really last thing I wanted to do was beach the boat on a nice firm surface and do a walk around and external inspection : for that I planned to run into Fowey early the next day on the flood, go up to Golant and dry out there for a tide and then be ready down near Fowey roads for the much longer passage across the channel.   As always the jet-ski’s all got bored and went home, after that everyone breathed a big sigh of relief and enjoyed the early evening.  Nearer sunset most of the small local motor-boaters packed up and went home, leaving just 3 yachts at anchor….the last one to anchor came in quite late….an old Stephen Jones designed half-tonnes from the very light and flimsy period of IOR race boat construction.  We used to have a sistership to ‘Gunslinger’ in our yard : she was so bendy that when the backstay hydraulics were pumped up hard the engine would go out of alignment with the shaft and if the stories are true it was essential to set the right amount of backstay tension to be able to motor without the shaft trying to shake it’s way out of the boat…..and to think I once had the plan of using an ex race boat as a cruising project !