I’m having a quick break from projects and blogging because it’s my birthday, for a change we headed down into Cornwall, did a quick pit stop in Truro (got some pictures) and then headed down to the excellent little cafe at Mylor boatyard.  Good lunch and nice to see some of the Falmouth oyster boats out working under sail….too grey and ‘muddy’ for decent pictures though.

Once in a while i do a quick highlight of boats currently for sale or up for auction that might make low cost small cruising boats or interesting projects.  It seems that a whole load of boat owners , or family acting for them, have suddenly decided to do a spring clear out.  A couple of these have sad histories but that is often the way of it, sometimes a boat owner goes over the bar and it can be years before the boat is disposed of.

So…lets take a look at what’s on offer right now.

The first 2 that i wanted to cover here are already gone : one was a Bolger Chebacco which i was almost tempted to go on the road for just to photograph but it went even before i had a chance.  The second one was a local boat, in fact in the same village where the yard is.  That one was an international sailing canoe…..not that i am in any way capable of keeping an ISC under control but it would have been good to have a look over and i did briefly kick around the idea of using one for my own sailing canoe project.

Out on the water a few weeks ago now and i saw the local hero who owns one out training, i believe that outside of extreme foiling multihulls and Moth class dinghy’s that the ISC is one of the hardest boats to sail.

Anyway, first up today is one with a sad history : owner went over the bar 3 years back and the boat has been sitting deteriorating ever since.  The boat is a little Memory 18 with a cabin and a couple of berths.

It’s scruffy and needs work but at that size nothing is very big, trailer looks good.  It’s already got bids so i hope it gets snapped up and refitted. 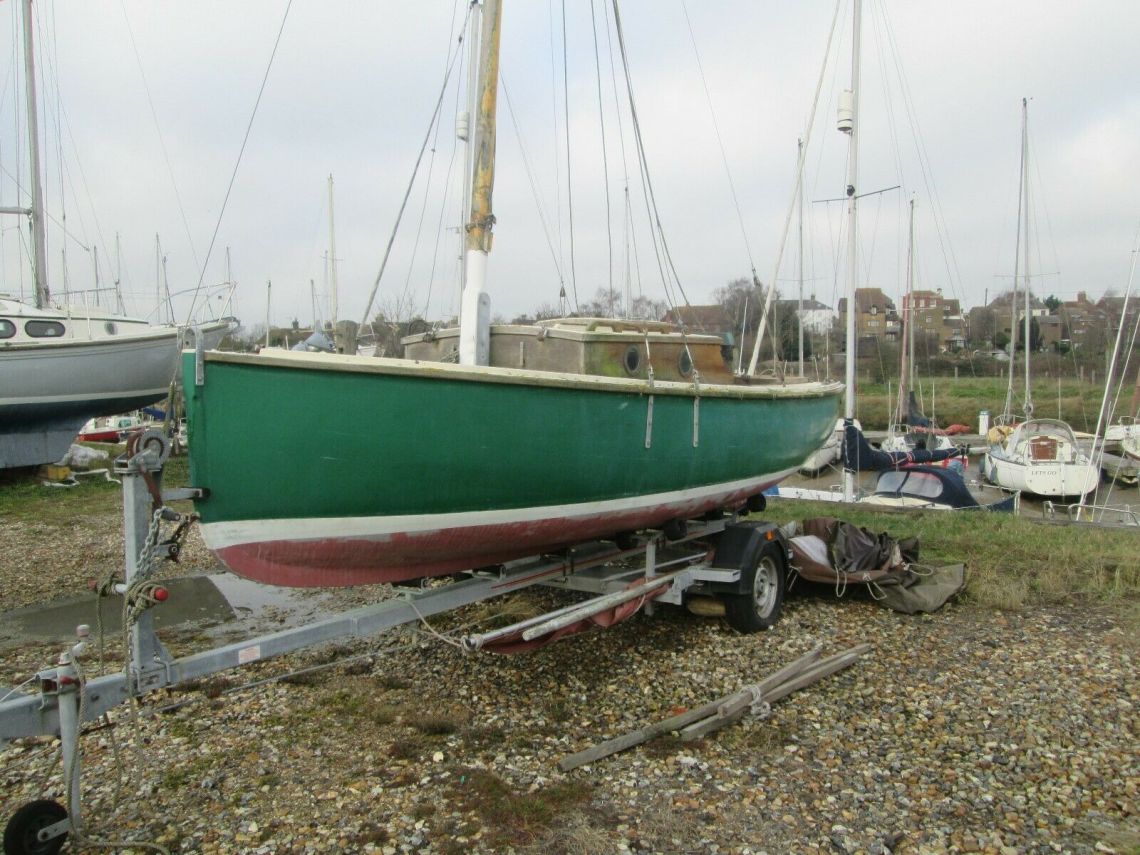 Next up is the kind of boat that might have been a very good alternative for the kind of thing that i do except a bit longer, wider, more powerful and more space.  Iv’e never seen one of these before so it’s as new to me as it is you all.  The trailer looks good…almost tempting to bid on it just for the trailer and sell the boat on !

The boat itself needs a total refit and i’m not sure how much useful gear there is…no engine included. 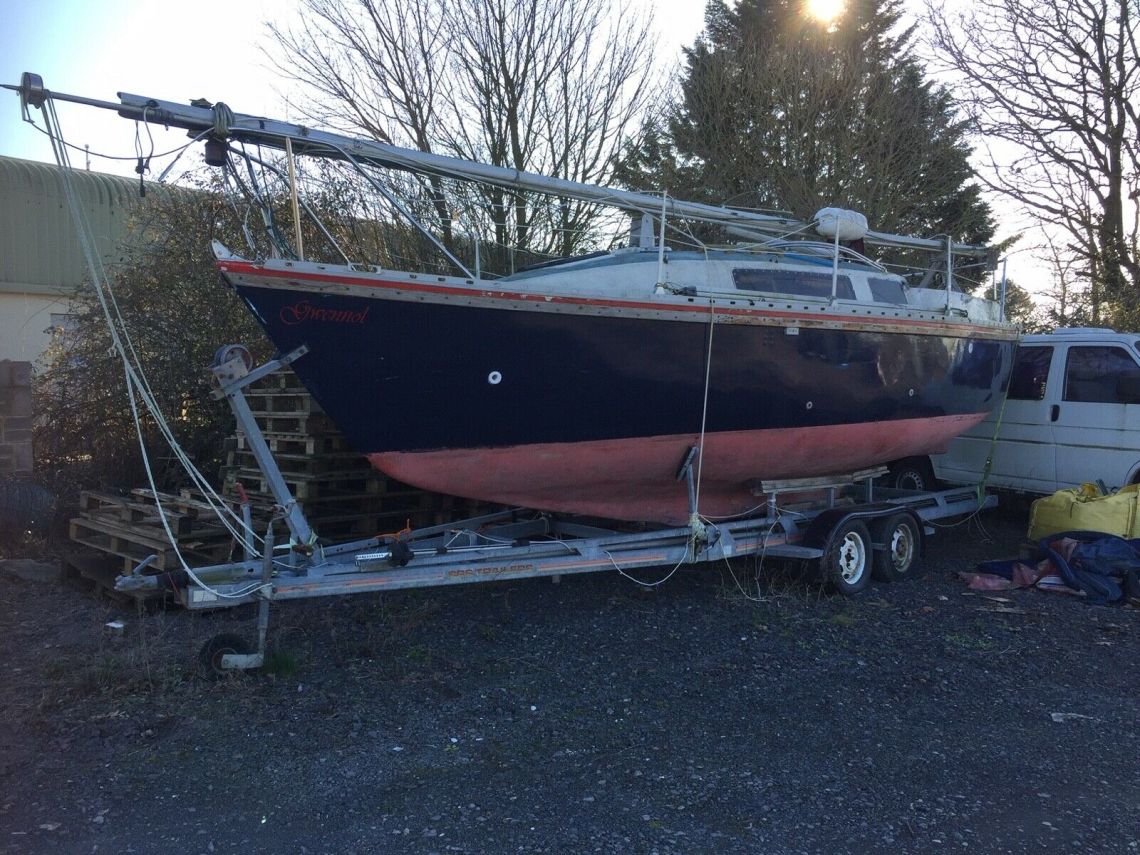 This is the one that got my heart beating a bit faster this week.  I initially saw that she was lying in Falmouth and would definitely have made a visit.  I briefly fancied that i had seen the boat on the water down there a couple of years ago when i was anchored near the entrance to the Fal river.

I could have kicked myself though because she is over in Morlaix and that would have been a neat birthday trip out and back and just a quick train ride up from the ferry at Roscoff.

She is a Lone Gull 2 design from Mr Griffiths who did rather spoecialise in rugged shallow draft boats.  Bit of a bus maybe but with the deck edge design the inside space on a chunky hull would make for a genuine small liveaboard. 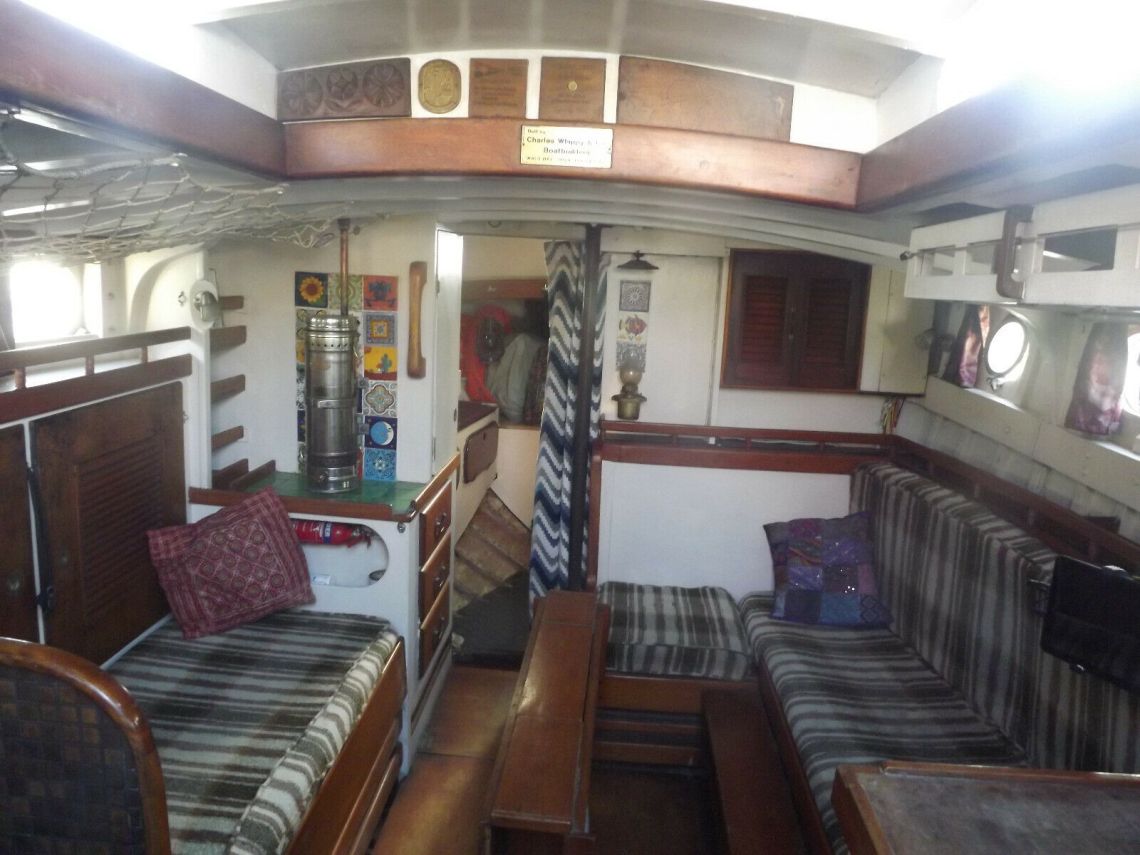 Aside from those 3 right now there are 2 Achilles 24’s, one of which has zero reserve and is to about a fiver….needs some TLC though !.  There was a ‘nice little Westerly’ which i missed and 3 or 4 other project boats .