In my recent post titled ‘I need one of those’ i started to build a new mobile tool storage rack that would carry all of my hand tools, my most commonly used power tools and all of the extra stuff like glue and sandpaper that i tend to use when i am working on projects.        In a much older blog post i photographed and talked about the building of a very quick and crude wall storage rack for tools which didn’t work very well and which is replaced by the new one.  As with the previous one my intention for this one was to build as much of it as i could from workshop scrap.  I hope to be using the workshop a lot more again now that i am more mobile, right now it needs a big tidy-up and clean-out, then a major re-organise and after that i want to build new bench tops inside and out with better vices, better workability and much better ‘stuff’ storage.

The new tool storage solution is a rolling stand that i can wheel outside because i do a lot of work outside especially when i am making stuff on the old garden bench which i use as my cutting bench for full sheets of plywood.      That really came into it’s own when we did the bathroom build because we were able to mark out and cut all the plywood for the floor and walls on it but i noticed even then that there was nowhere to put tools , except on the ground, in between using them.     I did think about building a much larger tool rack on the inside face of the workshop door, as it is that’s where i store the garden tools already but it does tend to get wet so that wouldn’t be good for my woodworking tools.

The solution came up accidentally when i was watching the Adam Savage/Tested youtube channel  and his great looking mobile tool stand.  I immediately thought ‘i need one of those’ and quite literally started building my own version the next day and just out of scrap plywood from the bathroom build.  The version that you see today is already the mark 2 , although it’s the same case, as i considered that the first stage build was only a full size working model.  Initially i didn’t build the rack deep enough, not necasarily in terms of tools but in that it wasn’t stable enough in that plane when i was wheeling it around on my uneven workshop floor.  There were also several mistakes early on : one was that i hadn’t considered having braked casters…..everything is on a slope here….and secondly that i tried to do the whole storage system with fixed dividers for ease of build.  After the first session and first look at the mark one i stopped and re-started the project by making a series of modular boxes for the top of the rack.

Top modules in place on the un-modified stand.

Starting over from top and bottom : first look at the bottom modules. 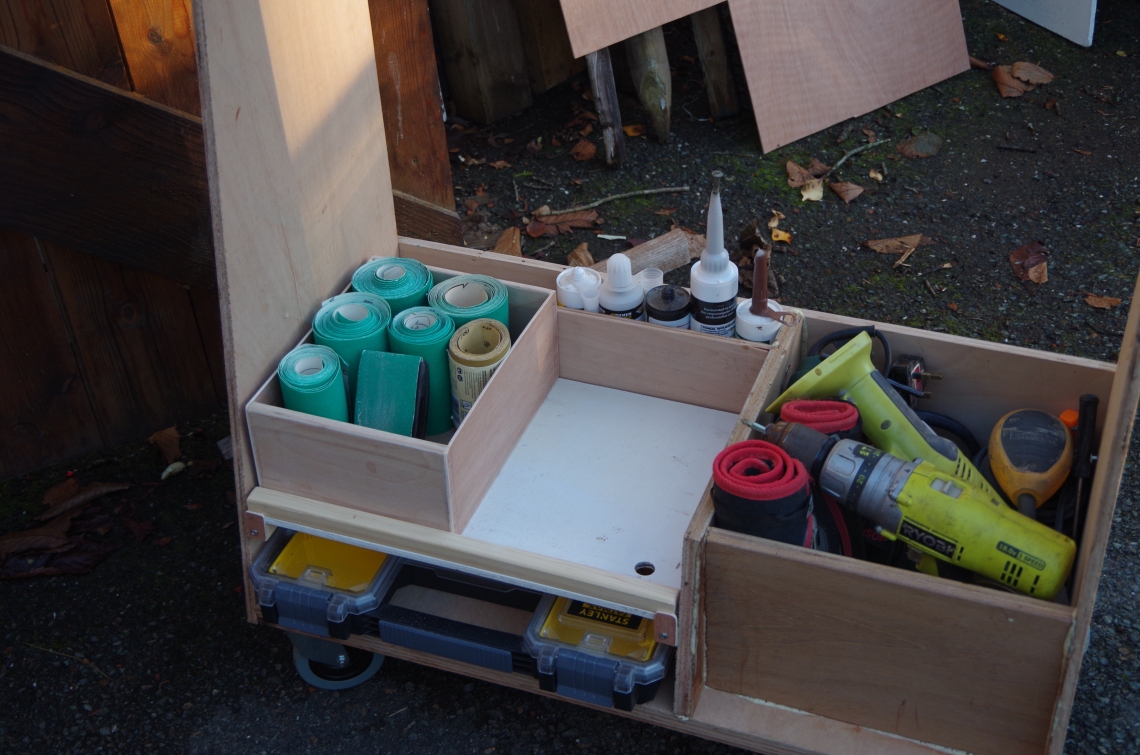 And that’s where we pick up the story.

So, this is the new version of the blog posts  in which i try to use writing, photography and video all in the same post and about the same subject.  I like to build stuff but i’m not very good at it, in fact i had one skipper years ago whom said something along the lines of “woodwork really isn’t your thing is it” and he was right.   Although i did have a formal education in woodwork at school from an excellent teacher i think even then that i was the kind of bodge-artist that made him despair.   We did learn the basics but it was all based in high-end cabinet making rather than the practical stuff that might keep a boat afloat or produce a level shelf so aside from some basic tool skills i really don’t have much in the way of valid skills.   One side of my school life that i kind of regret, although not my fault, is that i went to a grammar school that was attached to a comprehensive school and there was definitely a division of subjects even at workshop/crafts level : we got ‘clean’ woodwork and the pikeys got ‘dirty’ metalwork…..i wish now that i’d got a mixture of both.

I will say that i can slop epoxy around with the best/worst backyard boatbuilders and that a lot of backyard boatbuilding has nothing whatsoever to do with high-end cabinet makery that is square and exact….rather it’s all about weird compound curves, building light and simple structures that float….and just getting the job done most days.  I did learn epoxy/ply/glass construction through finishing a ply/epoxy catamaran and i guess that because of having put that effort in that is now the way i tend to do things even though it’s not the right approach in a cold and damp workshop.  Even when i did the Wanigan project a few months back i had to store the pieces in the house first to warm up and dry out and ‘cook’ the work in the greenhouse on a sunny day.   As many readers will know i took on an old gaffer with the intention of completely refitting her, one of my first jobs would have been to laminate some 30 or more new frames and i was in the process of learning how to do that when i came to the realisation that it just wasn’t going to happen on my new knee and very old back problems.  Today i have several projects in mind for the little Liberty as it looks as though i will be keeping her, a lot of that can be done best in the workshop.

Going back to my school days again and the other thing we got instead of practical metalwork was an opt-in to do engineering drawing so i did also learn how to produce plan/elevation and sectional drawings and basically how to design ‘stuff’……with this project i completely ignored any of that and just got on designing it by building it !            I must add though that i took the rough size and shape from the one in Adam Savage’s video but even then started by taking a piece of plywood about that size and slicing it across the diagonal to make the sides.  That the first version has come out at about the right size seems purely accidental and much more down to the size of scrap plywood i had laying around.  What i did sit down and design , one evening, were the modular boxes that form the top storage units and that was by the simple process of grouping those things together and working out a size and shape that fit most of them in groups of similar tools.

The first very obvious mistakes were that the stand wasn’t deep enough in the front to back dimension or too high in proportion, that meant that it was far too easy to push over on my uneven workshop floor.  The second obvious problem was that i used plain castors for the base and they were neither big enough wheels to cope with the cobbles in one section of the floor and then the whole thing started to roll off down the drive when i took it outside.    The next mistake was to try and build all of the top storage first by adding fixed dividers and that seemed to waste a load of space.  In the second version i started over by building the storage boxes for the top first, then working out the bottom storage and crucially by making spreader plates to deepen the footprint for the new braked castors.

The thing from the workshop goes live !