In an earlier series of posts that some of you seemed to enjoy i kicked around the concept of the small, basic and inexpensive boat as a starter boat.  I know that i took as a starting point a series of potential budgets and had a search to see what we could get for our money.  Not so long ago i happened to be grazing over the sailing magazines while i was in town and noticed that one of them had done a similar thing with what they called starter boats although their choices were radically different to mine. I have no idea what market they think they were catering to but as i remember it some of those boats were in the 35 foot range and £50.000 and up !  Maybe, and i hope this is true, that they know their market and i don’t. To be honest i never buy sailing magazines at all now and mainly because i try hard to create my own content and not be swayed by what’s happening in the mainstream yachting market.

If i have any outside influences it is via the internet and a few Youtube channels and a large library of older sailing books.  I am still heavily influenced by those sailors who have done the miles and then added something valuable to our store of knowledge.  Pre-internet i have to give credit to the Pardeys who took the time and effort to put their ideas into book form.  Publishing now in such a small and specialist niche is a very difficult proposition as few people are actually buying books any more.  Today i look to the internet and just a few really good channels for similar inspiration.  Recently i discovered Troy and Pascale (Free Range sailing) out there doing some very good adventure cruising in a difficult area and very self-reliant folks they are too, very good entertaining and informative video’s.  If you haven’t checked them out so far please do.

Troy and Pascale’s boat is one i don’t know at all, i think its a local , Australian, design from the 1970’s with a semi-long keel and moderate proportions all round. They think of it as a small 30 footer but then they are living aboard it full time as far as i can see and are clearly having to store and provision for extended voyages.  Their boat forms the point of departure for a new boat search, here in the Uk and my challenge is to now find a viable, low budget boat in the 30 foot range.  It’s actually a genuine search too as i am slowly easing my thinking away from the 25 foot range that i considered recently so in real terms it could well be the actual next boat research. 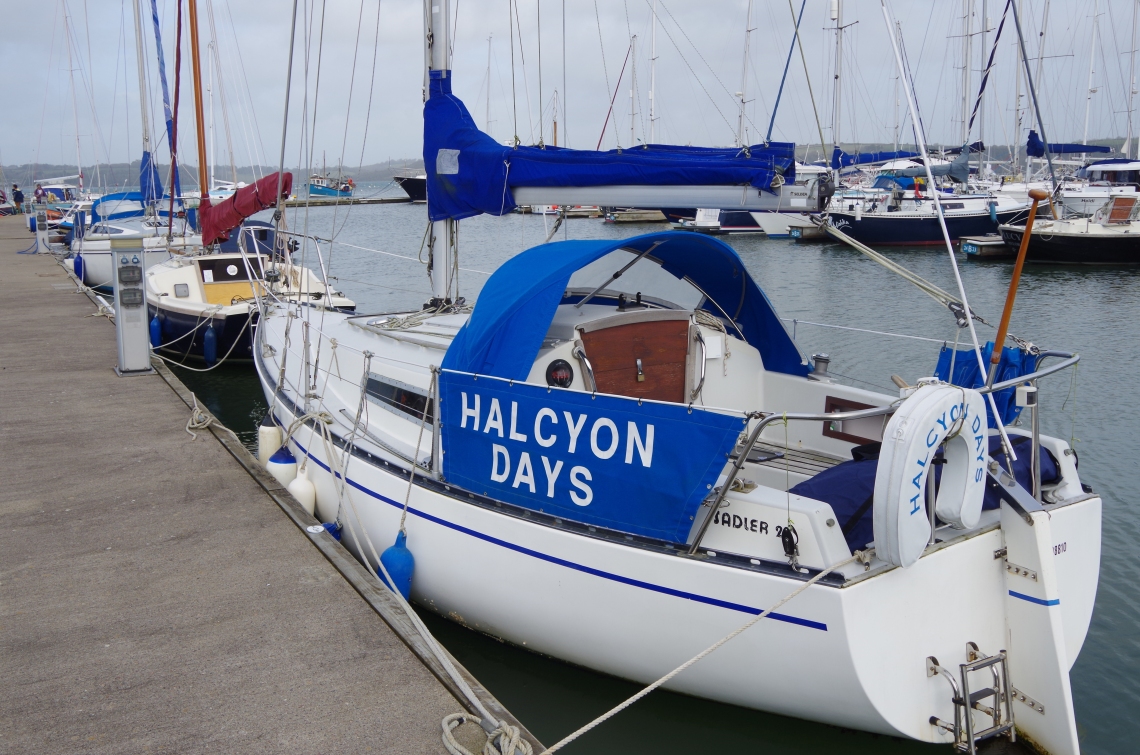 In the earlier series i set a few budget points and tried to find the best boats i could with as much starter gear as possible.  In this series i am setting a budget which is slightly out of my reach in real terms today but might be do-able especially if the starting price comes in well under budget and then allows for the essential upgrades.  The difference in this series is that offshore/ocean going gear will be essential rather than desirable and it is buying that gear for boats in this range that can be a real deal breaker. Just as an example i once talked about anchors as a critical reference point for budgeting, i absolutely regard anchors as more important than insurance given what happened to one of my boats.  Although i am jumping ahead i know that a modern hi-spec anchor will be high on the gear list and that means spending around £230 just for the hook and maybe another £80 for hi-spec chain.   As i said : jumping ahead.    For this project lets have a budget of £10.000 ready to go to sea….that’s actually pretty tight for a 30 footer and it’s inevitably going to be an older boat.

My usual place to search is the Apollo-duck website mainly because there are thousands of boats listed and their search function has a filtering mechanism to create a tight search around size and budget.  My search parameters were : 1. Cruiser-racer 2. Minimum length = 27 feet. 3 Maximum length = 32 feet and 4. Maximum budget = £12.000 just to see what might be around and potentially negotiable.  In real time i have actually done the search several times because my initial search without the budget limitation created 20 pages and more with 50 boats per page !.  Luckily most of those were outside my budget or complete dross.  The interesting thing for me is that the size and specification here throws up boats that i know absolutely nothing about because most of them were ‘not quite competitive’ in racing classes just before i started sailing myself so weren’t necasarily well known boats even then.   This era is really just before the designs that i know anything about so it’s the S&S era for example rather than Farr and co.   So, lets go kick some tires……

First offering and one of the few that i actually recognise. This is an Elizabethan 29 and i think one of David Thomas’s first designs. The little i know about the design is that it was intended as a half-ton contender but quickly became regarded as a good cruising boat. First thoughts are that it’s a moderate looking boat, should sit on it’s keel nicely, doesn’t have a huge amount of space and might need all new sails.

Cabin view..looks ‘friendly’ and clean inside. 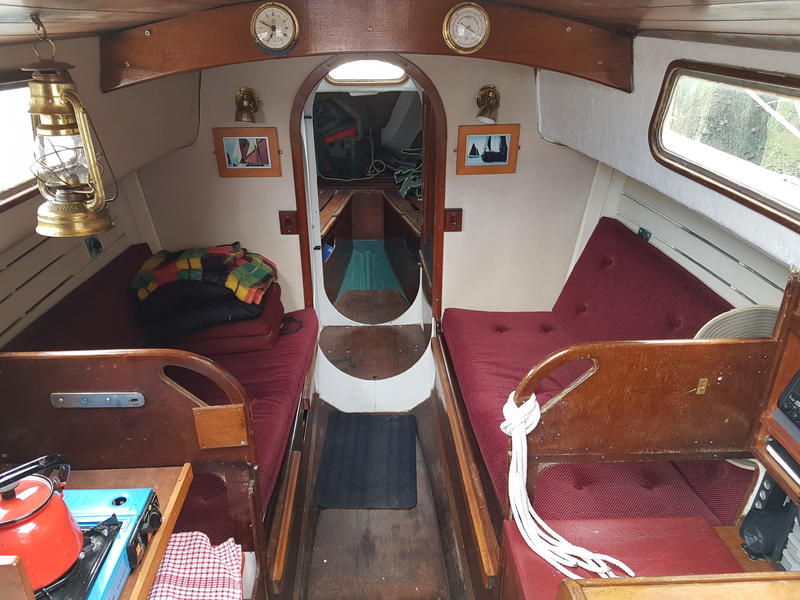 From a later period a boat i just remember : this is a Beneteau First 30.  The IOR influence is really beginning to show here with more beam and a bigger rig.  The keel shape is almost at the point that i would be nervous about sitting the boat on a hard bottom.   I am generally a bit wary about French production yachts of this period….although slightly unfair we didn’t refer to them as bendy-toys just for fun.  I think it was one of these that came past us on our lumpy cross-channel trip that has prompted the ‘longer legs’ idea.

Going back a bit into the era of boats that i really don’t know anything about this one popped up.   It’s called a Javelin 30 so its in the right size range although the hull wastes a lot of length with those overhangs.  The interior is very basic but strangely enough probably more functional than the more modern Benny.   To my eye it looks like a cross between a Contessa 32 and a Hustler 30. The forums i have checked out and don’t have much to say except, sails ok, well built, small below….okey-dokey.

That’s just the first selection and only taken from the cruiser-racers, in pure race boats there are some more modern half-tonners and some race focussed older boats which i didn’t include because they are too far down that road.  If i include pure cruising boats there is also a decent selection of similar age long keel boats, again most of them i don’t know at all. In the first selection i didn’t include one very good boat of which several examples appeared and that is a boat i quite like (GK 29) but which when we went to see one didn’t like as a cruising boat.  Although technically the best boat in the potential selection it felt like climbing down into a deep dark cave with only the main hatch for light. Jax has i think a very good instinct for what would make a good home on the water and that has to count with a longer term cruising boat.

I think i have come to the conclusion that a variable draft boat will be outside my budget by a long way once we go above 25 feet. The boats that are in budget at that size are just too small for long distance and long term cruising.  I did find this one which i would certainly look at if it wasn’t right across the country (yet again).  I don’t know how it works that i live right next to one major sailing centre (Plymouth) with another one 2 hours away (Falmouth) and i still only find boats more than a hundred miles away. Anyway and moan over…this is interesting…..except that it’s in Essex ! 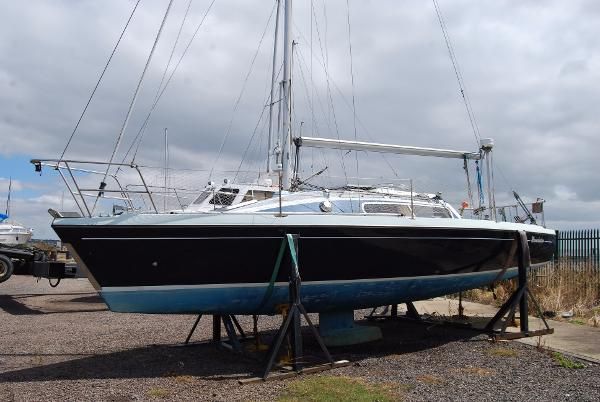 Part 2 of this post is directly about the refit and/or modifications budget that any of the above boats might need to bring them up to proper offshore/ocean standard.  Although i have had a good look at what the listings say is part of their gear it’s impossible to say how good any of it actually is until seen.   Having to replace lots of the gear on a boat of this size would break the budget and it’s worth remembering that aside from the cost of purchase and the refit costs we also need a ‘float’ to run the boat with.  I already have in mind certain gear which i consider essential rather than desirable for a proper offshore/ocean boat.  High up in that list is a quality windvane self-steering rig like the Windpilot…one of those just for a starter would be around £1800 new now.  It would be good to get a boat with a tidy set of sails, if not and once again , having to buy a mains’l and a furling genoa would be a deal breaker.

Essential kit if not in the purchase.

Tender (we have one) tender OB would be desirable.

VHF with DSC and AIS.