Of plans and men……and boats.

Well that should have been straightforward !

With all this talk of refits, lay-ups, knees, project boats and so on, the first critical stage was to get WABI”’ back to the Tamar and alongside so that i can start either a sailing refit or a ‘tart-up’ to market refit, either way it would be best done near home.  Over the last few weeks i have been getting the Liberty ready for a spring delivery back from the Exe and the last couple of days looked like the ideal weather slot….basically easterly’s for a couple of days with some nice big tides to play with.  I watched the weather forecasts for a few days and they seemed to be stable, essentially one day of a cold brisk south-easterly followed by 2 days of true easterly’s at about force 4 to 5……almost perfect for a motor down the river and then 2 days of fast sailing with a break in either Dartmouth or Salcombe.   We even sorted out the logistics so that i wouldn’t have to go and retrieve a car from Topsham.

The plan all seemed to a happening thing, i got off-shift reasonably ok, met up with my partner, had a bite and then drove over to Topsham where Jackie dropped me off and headed home with the car.  It was another cold night but nothing i haven’t dealt with so far this year.   The tidal timing called for a pre-dawn start to motor out of Topsham and down-river just around high water which meant being off the pontoon by 0600.  That went well and by 0715 i was down at the moorings near the Exe channel entrance, tied up to a visitor mooring and having an early breakfast as the tide started to really sluice out.  I had thought about sprinting out over the bar and maybe dashing across to Torquay but i still wanted to fit the autohelm for the long trip home so i stuck with plan A and got on with jobs……sunny and bright but cold in the wind.

I did have about half a day’s worth of work to do to get the boat really ready for an early season coastal/offshore voyage and over the course of the day i got all the jobs done, re-stowed the boat, aired her right through and was sat doing my tides and waypoints for the trip home just as the sun was setting.  I got the autohelm in, wired in and running as i really wanted to test it and use it on a ‘straightforward’ reaching trip.  The plan being to motor out over the Exe bar early the next morning, 0600 again and then i should have had a beam reach down to a waypoint off the Skerry’s bank and then turn downwind to start point and Salcombe.

It’s not easily visible but that’s the wiring diagram in my notebook and sitting on the galley step after taking the cooker and the galley box out.  Man but that coffin berth space is tight as i had to get in there head first to wiggle the wiring through into the cockpit.  I even managed to remember to check the polarity after connecting everything.

It was a much milder night and i was awake at 0500 and having a neb outside, it still looked good to go with a breeze from the east so got lots of layers on and motored out over the Exe bar at pretty much high water and hardly any wave action.  I had already hoisted the reefed mizzen purely as a heaving-to aid.  As soon as i was clear of the bar , and the ebb was already running, i hove-to on the mizzen and hoisted the main, also at the first reef and the started reaching briskly south towards my first waypoint some 20 miles down-track.  I decided to hand steer for a while to get the boat completely balanced before setting up the autohelm.       However, the easy but fast reaching turned steadily into full-on powered-up and even a bit heavy on the helm so i thought it wise just to keep hand steering for a bit longer.  The visibility went down and the wind built quickly but what was the greater surprise was a much larger sea than i was expecting.  Instead of easy power i was having to fight the boat and couldn’t get her to balance.  Even with what felt like the right sail trim i was having an increasingly hard time with the waves which were steep and breaking even after i had cleared the shallow water area.

At about 2 hours in i was distinctly uncomfortable, not scary-dangerous but definitely with that ‘spidey-sense’ not-right feeling so i hove-to for a break and a think.  Looking straight into the wave-train was a bit disturbing as the waves were not only a lot higher than i expected but much shorter and steeper.   I took the main down completely and had a quick think about things.  I didn’t like the situation at all and neither did i like my choices.  I couldn’t really reach back to the Exe bar as the ebb by then would be at full flow.  I didn’t like the look of Lyme bay to the south and neither did i really want to run towards a lee-shore and shallow water.  By now the wind was blowing, i estimate, a 6-7 but had a northerly slant.  Looking to leeward i could see the headland and the islets to the east of Torquay and Berry head to the south-west.  I made the instant decision to run for shelter and try to get in the lee of the cliffs outside Torquay.  It was a fast, challenging and slightly scary run using just the mizzen and the motor for speed and control.  Really it was the wrong rig and i needed power forward but having the mizzen partially up would still allow me to heave-to.  I had some monster surfs on some very steep and hollow waves and came very close to broaching a couple of times but in less than an hour i found the lee and got into Torquay harbour…..where it started snowing.

I thought i might stay overnight but the forecast the harbour-master gave me was just going up and up : sixes and sevens that day, sevens and eights the day after so no real chance of pushing across Torbay and getting into Dartmouth.  Even the harbour was uncomfortable with the pontoons banging and creaking up and down the uprights. So WABI”’ is in Torquay harbour witha haul-off line to keep her from grinding against the pontoon.    I gave up, trekked through the town in wind and snow to try and find the train and get home.

Bit different to last time i was here. 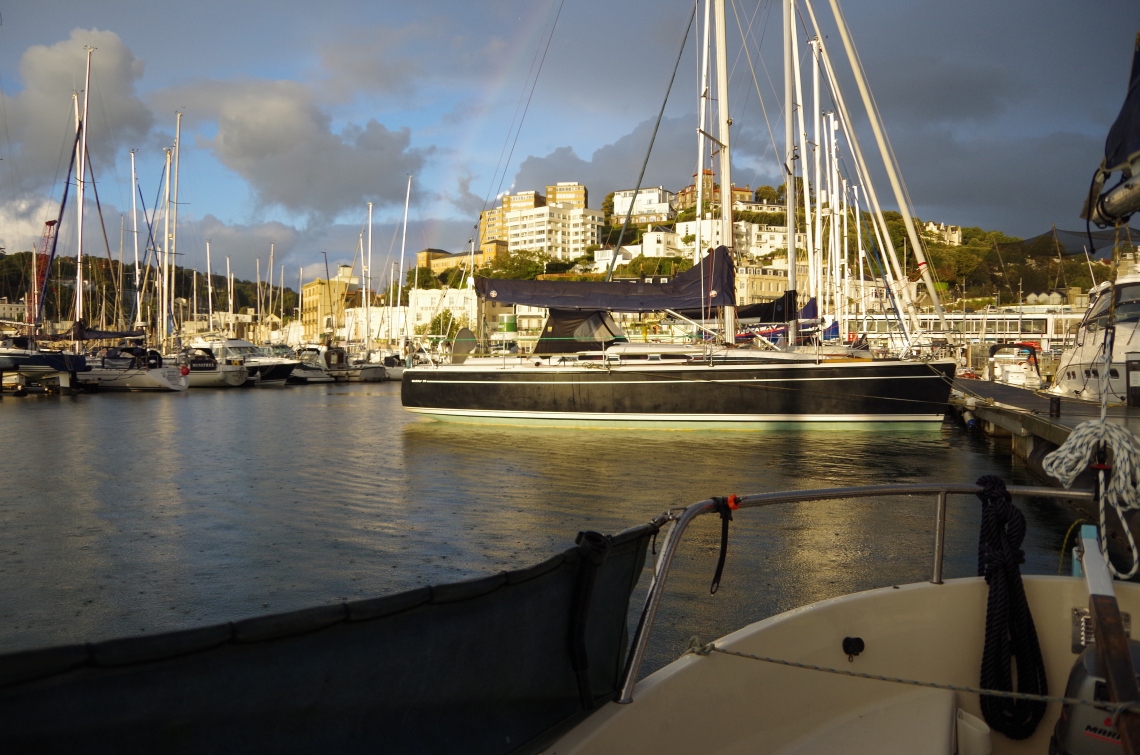 Never did get to use the autohelm either.

According to BBC weather it’s been blowing up to 45mph from the north-east today and snowing. I don’t think that there was that much wind but there was enough !.  Lyme bay is a problem and i guess the main problem is that it was maybe already blowing harder in the east of the bay and setting up a heavy wave-set that i was then getting.  Of course i was then also in the downwind side of Lyme bay and in potentially shoaling water so the decision to run even further into the bay was not the best one unless i got on with it straight away.   I had an idea that approaching either Torquay or Dartmouth was the best approach as i would get a small lee at either one.  Torquay was the nearest so i committed to that action.