Today i made the long drive over to west Sussex to go see the Devon Dayboat ‘Narwhal’ and meet the current owner with a view to buying either this or the standard racing version.  I wrote about the trip back very briefly in the last post : it was pretty awful on the road with steady rain, heavy spray and seemingly everyone heading to the west country on holiday.  On the way out this morning every layby on the A30 was ram-packed with caravans and with more of the bloody things streaming into Cornwall like a pestilential convoy !.

Ok so i got totally lost around Chichester and forgot that my roadmap was on the living room floor and not in the car but aside from that i met up with the man after a couple of phone calls and spent about an hour looking at and talking about the boat.  I think it was Steve Mundane that commented that the owner seemed both very knowledgeable about the boat and was being honest about the condition…he is and was and that’s a great start.

So : what about Narwhal then.  Well she is a rare version of the Devon Yawl but with the addition of that cuddy forward otherwise its the same hull as the racing version with the same rig (nearly) and the same foils.  The boat is from about 1973 so pretty old for a GRP boat but boats of that era (GRP) do seem to have been well molded and don’t seem as prone to the pox as later boats.  She isn’t a pretty boat or at least not in comparison to the race version but i do think a lot more practical as a cruising boat….that cuddy makes an enormous difference to shelter.

Basics then : 16 foot GRP simulated GRP clinker.  Layup looks typical of the era (heavy) the gelcoat is very chalky and its about time for the boat to be painted rather than polished.  Plus + very few if any star-cracks and just some nicks and dings as expected. There are some minor areas of damage to the CB case and around the mizzen step but nothing major.

Both boards (CB and rudder) are plain flat metal plates so very un-hydrodynamic.  The board weighs some 180 lbs so the boat will have a lot more stability than other dinghy’s when its down.  The CB has been out, blasted and galvanised.

Rig. Its a yawl (actually its a ketch) with a bowsprit.  The mainmast normally sits in a tabernacle on the cuddy roof supported by a pair of GRP arches under the roof. The current owner has added a compression post in the form of a piece of plastic tube as the cuddy seems to sag a bit under compression. The tabernacle doesn’t work properly as a pivot as the front is closed.  The mizzen just sits on the small aft deck and there is a similar problem with mast compression loads there. The tiller interestingly comes under the mast !.  Both spars are a bit old and tired, main-mast has damage at the foot.  The vang set-up doesn’t seem to work properly (angle is too flat).  The genoa/jib is on a roller furling spar whereas the race versions seem to use a separate forestay and a jib furler only.  Sails are very old and tired. 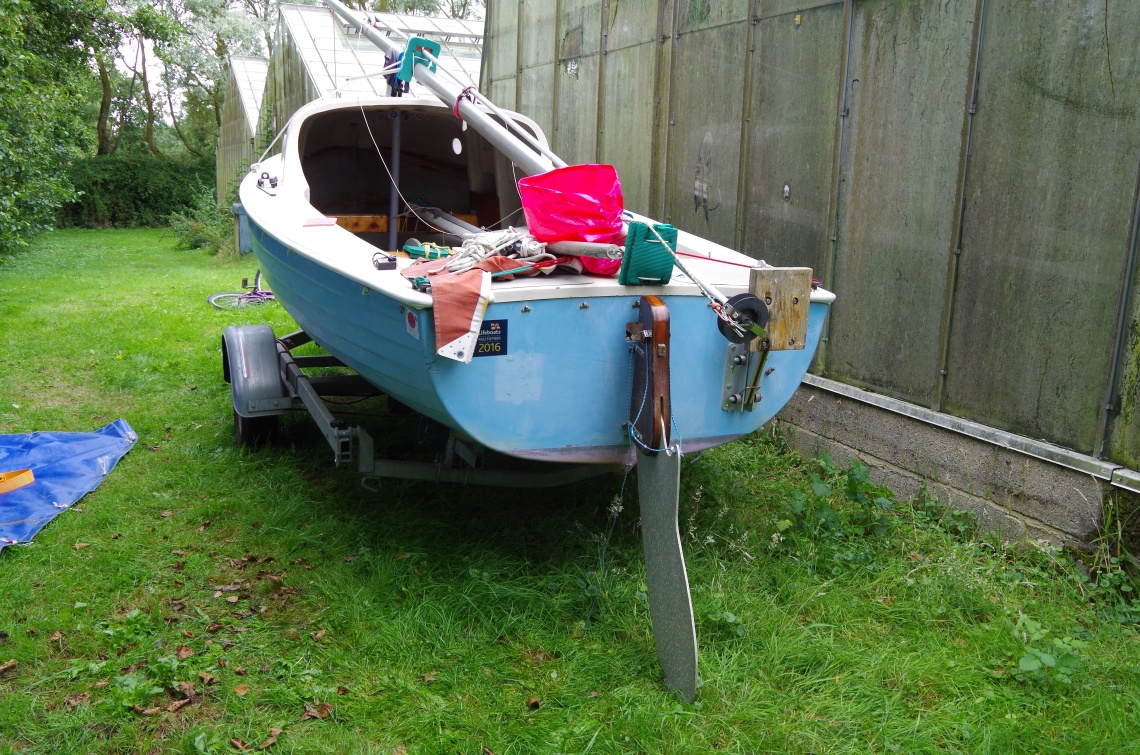 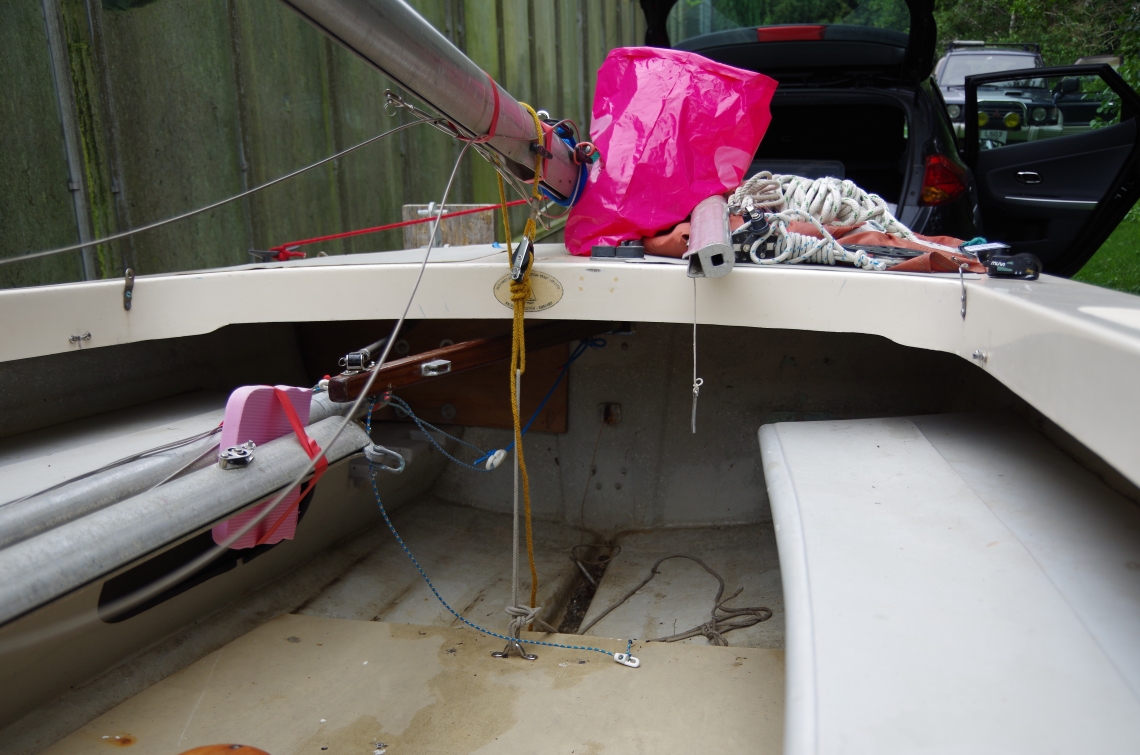 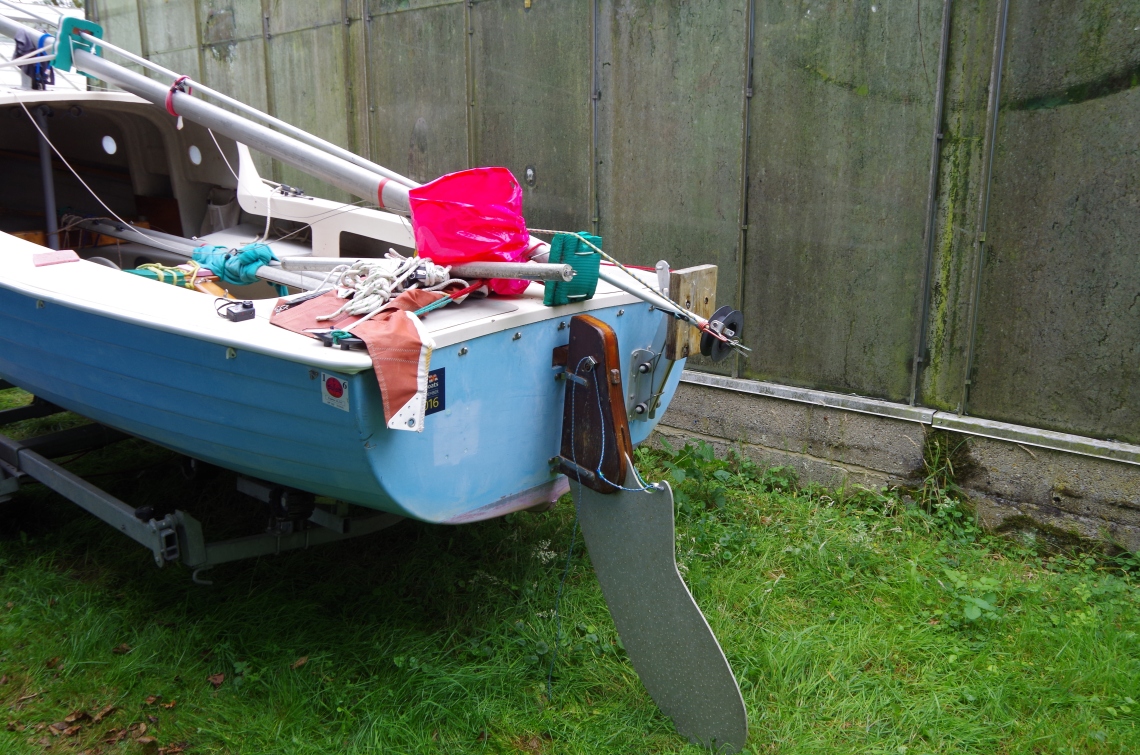 Inside.  Is pretty simple : space forward under the cuddy which looks just big enough to sit underneath and make a brew. The owner reckons its just large enough to sleep in there or on the soleboards although the rear-most board would need bringing up a bit. There are bouyancy tanks both sides apparently foam filled which is a shame as they could be good storage spaces.

Trailer : isn’t my area of expertise but its relatively new and looks heavier than the boat needs. Its braked and does have extension bars for the lightboard (legal requirement in France now).  The trailer looks in very good condition to my untrained eye. 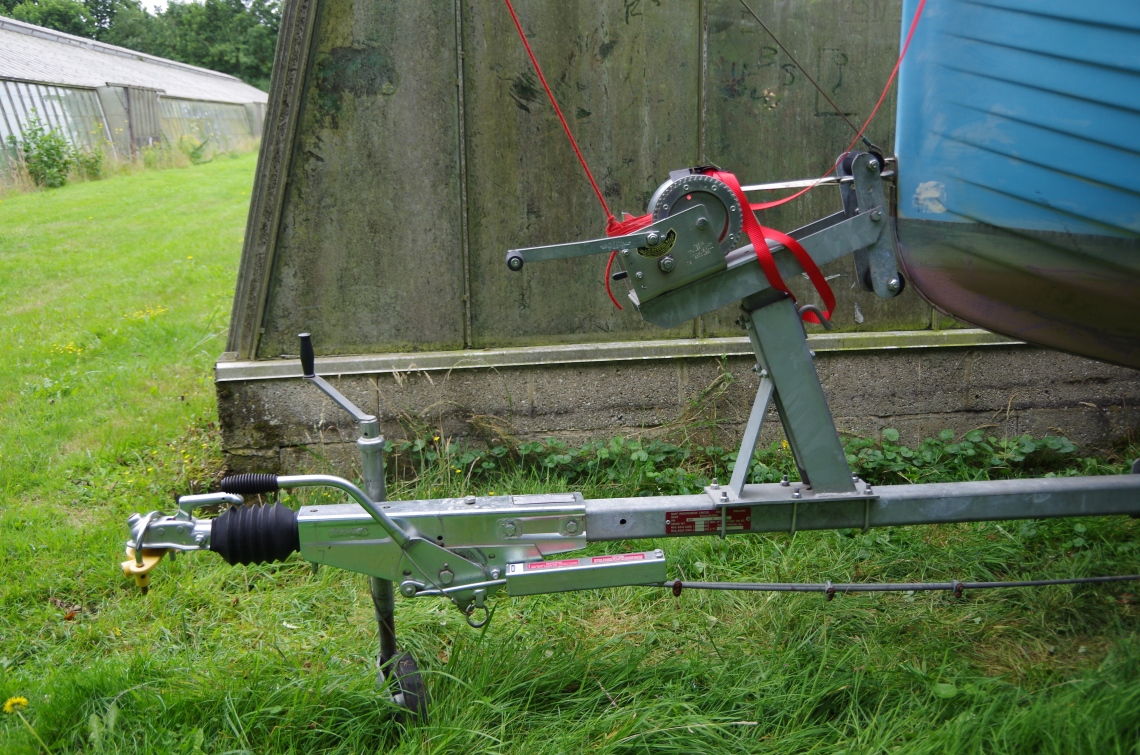 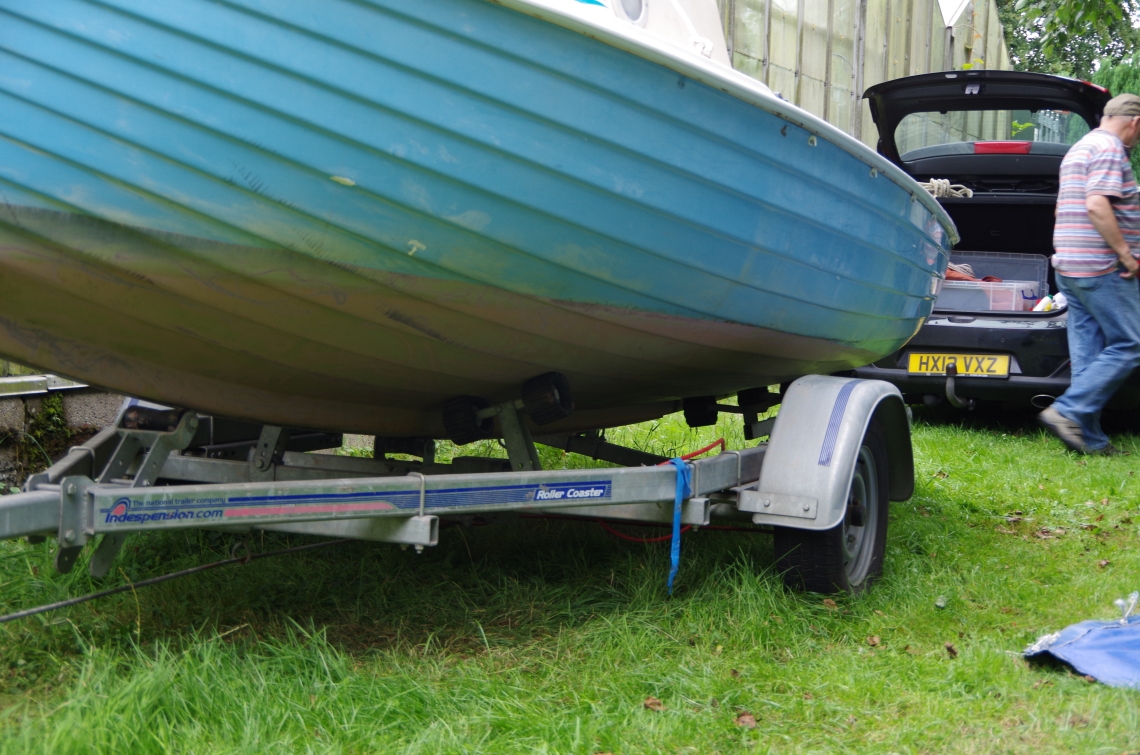 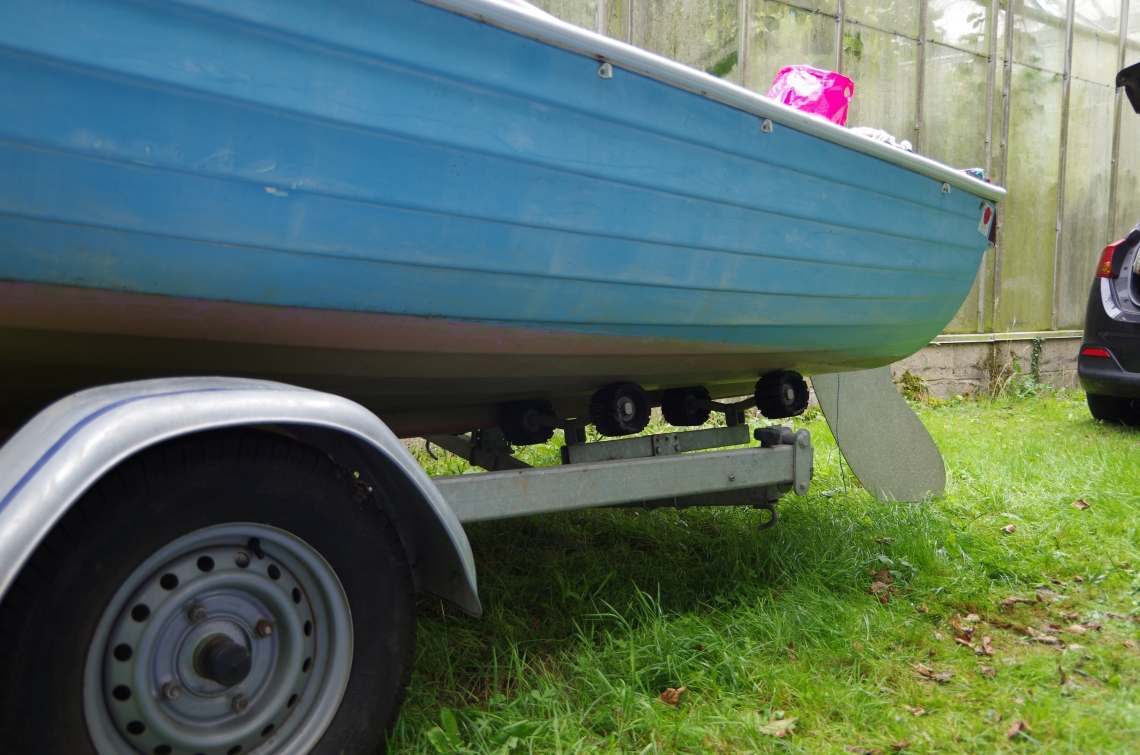 Engine : not seen but its a 4HP Mariner stroker i believe.

My opinion and largely shared by the owner is that its a good starting point for a potentially great boat.  She needs a thorough refit now although she could be sailed for a season as she stands.  To be up to standard she needs at minimum a repaint, new spars and sails and a lot of detail work.

Edit. Clips taken during the viewing.