A muddy walk in Rainbow creek.

Note to readers : this is the first post in my new series of ’shorts’ , not about a different subject rather just in a slightly different format ; my own description being ‘short and sweet’ and based on the idea of what we are doing and where we are.  This series will me mostly about the simple things that happen during an autumn cruise in the uk, rather than long-form essays. This has come about after a lot more thinking about the value of a written blog in today’s low attention span ‘youtube’ world and following a couple of conversations with my NZ friends , one contributor/commentator to this blog and another sailing blogger.

WABI’’’ real time. It’s early morning in late September, still very grey and overcast with continuous light rain.     WABI’’’ is dancing around a bit, pitching and bouncing in a wind against tide as the big near-spring tide starts to run out of Ruan creek.     Yes…we’re still at anchor in Ruan creek but much further up creek that my usual spot and in the best shelter that i can find.    Good shelter….but not perfect and not complete as the wind is whipping around the small headland to my south now that there’s more south in the wind than forecast.

Last night was a wild one even in a sheltered creek : just around dark and a couple of hours into the ebb it really started to blow hard here ; not steadily but in short, sharp gusts.       The forecast suggested wind up to 45mph and i think we had gusts up to that even though most of the wind was being deflected over the boat by the trees and just hitting the 2 bare masts.    It was also uncomfortably wind against tide just as it is now ; in between gusts i could feel the strong swirl of tide under WABI’s bow as she tried to swing back into the tide….then a few seconds later a hammer-blow gust would hit the rigs, she would heel over with some force and the stern would blow down against the tide.

This is a new aspect of the boat that i haven’t experienced before : my problems with WABI’’’ at anchor in wind against tide, or just lots of wind, having always been bow related  Usually what happens is that the wind drives the bow offwind because of windage forward although iv’e reduced that tendency a lot with the sprits. I think last night’s problem might have been a peculiarity of wind direction and strength and hitting the stowed mizzen on it’s sprit at the back of the boat before anything else. 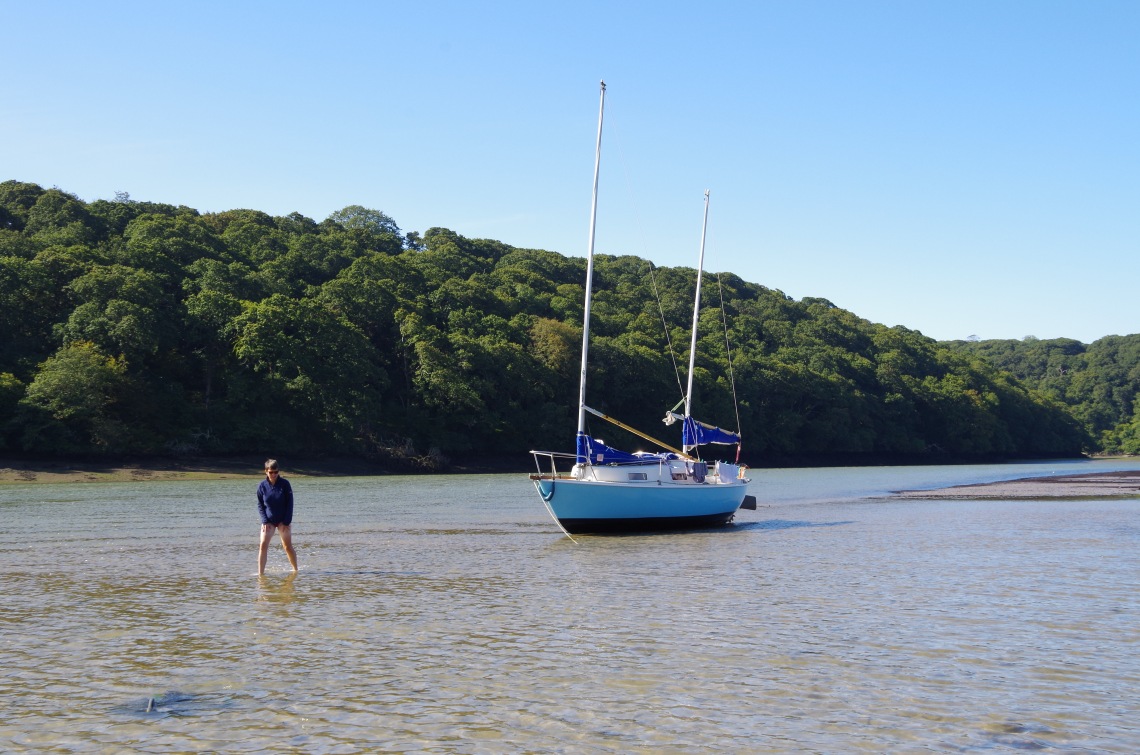 Later on today, at low water, i’m going to take another walk along the creek bed just as i did yesterday except that this time i’m going to walk the anchor into new position in the bed of the creek when WABI’’’ is well aground ; i’m even tempted to do a ‘Bahamian’ moor with 2 anchors because we’re almost at springs and i don’t want to end up neaped on the mud here.

It was a lot of fun, almost child-like, to go splashing and squelching up the muddy creek : although i could reasonably explain that it allowed me the opportunity to explore and sketch the meandering channel further upstream than iv’e been able to navigate so far it was mainly just the chance to get off the boat, stretch my legs and go for an unusual walk where, i guess, very few people ever have.