Continuing the story of my passage from Ipswich on the east coat towards home in the Tamar with the Deben 4 ton ‘Inanda’.     After my minor epic in Chichester and being towed up to Emsworth i got the engine going again and made the decision to move on.  What happened is that round about this time i was going to have to leave Inanda somewhere for a few weeks while i went back to work.  I wasn’t able to find a berth at a price i could afford but my partner managed to find something much better just along the coast so i made a quick passage down the Solent and across to Poole.

I hardly know Poole as a sailing area having only been there twice before in sailing boats and once to run a canoe/bushcraft course many years ago.  The whole area is great for canoes , kayaks and small sailing boats as the south side of the harbour is a miniature maze of islands and shallow channels. Add to that 2 accessible rivers : the Frome and the aptly named ‘Piddle’ and it’s a busy area on a nice day.  The Frome is shared, mostly successfully by a wide variety of sail and motor boats…..most of which behave themselves……mostly !.

The guys at Ridge Wharfe do say that there are some motor-boaters that hoon up and down the river and i did have one fast ‘pass’ by aggressive jet-skiers…..not a problem for me but i wouldn’t have wanted to be the family in an open canoe coming the other way. (why do all jet-skiers seem to be angry and aggressive wankers i ask……?)*

There is a small marina at Ridge Wharfe which partially dried out on some of the low spring tides while i was there and its a small boat place only with boats up to about 25 feet on the tiny landing stages.  The yard does have a whole line of river moorings and some boats alongside the riverside landing stage too.  As always i had a walk around the yard with my camera and got some pictures of the wide variety of boats at the yard.  It’s certainly not a modern-generic marina/boatyard in any sense but has a wide variety of old and new, power and sail but all with a maximum size probably dictated by the depth of the river and the small lifting dock.

Looks semi-abandoned but just might be one of those lifelong projects.

Freshly antifouled and ready for the water…….off to Venezuala mate ! said the owner.

Big and chunky….methinks this might be a ‘fifer’ (not a Fife design) 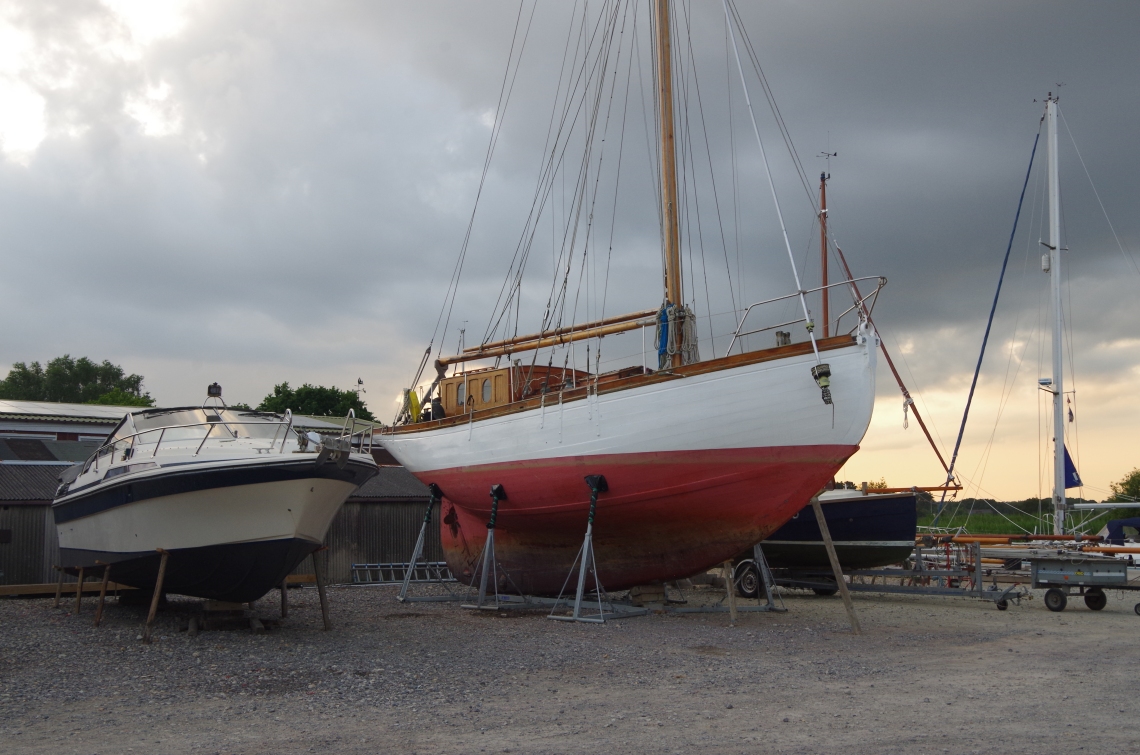 I had a look at this rig project under way, the boat it belongs to is a big and old gaff cutter with very traditional gear. All the rigging and blocks were getting some layers of linseed oil by the smell of it….i never did work out what the club-shaped device was in the centre of the first picture……maybe the crew ‘persuader’

We had to make a couple of trips into Poole to source bits and pieces for Inanda’s jobs, one place we found on the older part of the high street was this amazing ‘proper’ hardware store called Boones.    For those that know old British comedy routines think ‘forcandles’ by the 2 Ronnies.

I think i have only been on the town quay once in a sailing boat and that was when i helped a mate bring one of the big ocean youth club ketches across from the Solent in a near-gale.  Both of us had just come back from our sailing circumnavigation so were well dialled-in for some heavy weather but i think some of his crew were a bit ‘impressed’ by us stomping across Poole bay in a spray-flying power reach.  Today the town quay is very much a bars and restaurants tourist trap and its the home of some of the worlds ugliest power boats (in my opinion).

Out into Poole harbour.

With more time i would happily have spent a few days sailing and anchoring around the small channels of the south side of the harbour which is a complete contrast to the noisy and commercial northern part.  As it was though we had to leave the harbour after just one night at anchor near Long Island and Green Island.  This might even be the last picture of the Wykeham-Martin furling gear set up ready to use.  Even after another freeing-up session and on a brand new dyneema halyard set up as a ‘vee’ hoist it still wouldn’t work properly….in fact the jib wouldn’t unfurl at all so i took the whole thing down and set the jib ‘flying’…..but that’s part of the next post.

The anchorage off Long Island, in years past we canoed to this Island and bivoauced there, nowadays it’s ‘private’ and strictly no landing for boaters.