As in “honey i bought a warship”.

No i haven’t actually bought either a Waarschip or  Warship although i know one bloke who owns a (small) decommissioned one and at some time i still want to do a post about the rebuild of the Schnellboote locally.

No : this one is about the Waarschip factory and is a continuation of the recent post about E.G Van de Stadt as their office has done some designs for the Waarschip line and i thought for a while that the Van de Stadt connection was maybe that of being an associated in-house designer but i have since found out that many VDS designs have been built by other factories including several defunct British ones and that several Waarschip designs are from other designers.

While looking at a potential project with the Waarschip quarter-tonner i also spent a whole load of time just looking at other boats from the same factory, both smaller and larger and i note that their expertise does seem to be with plywood although they now advertise as being boatbuilders using high-end composites as well. I have definitely sailed and raced against some plywood cruiser-racers of half ton and three-quarter ton under the old IOR and seen a few of the similar cruiser-racers around. This one is very much for Al…you watching mate ? this one should float your boat. 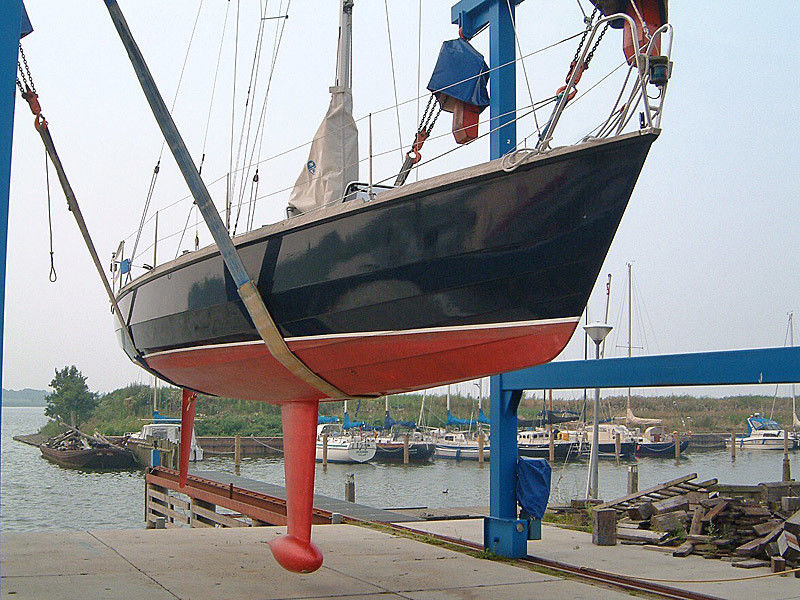 This is i believe the Waarschip 1010 so about 36 feet long, slim but with a deep and narrow chord keel with weight on the end so it should satisfy ‘goes upwind’ but i don’t think its one that i could dry out on the beach.  It was the interior that caught my attention : simple varnished ply and white paint and looks totally clean, practical and seamanlike and totally unlike the mass of over interior’ed modern offerings from La France.  The interior slightly reminds me of an older IOR one-tonner called ‘Rakau’ (Stephen Jones i think) built in the late 80’s and all timber. I can imagine in the winter just stripping the gear out and going in there with a hose and just washing the interior right out.  I particularly like the watch-seats by the comapnionway.  My version would add a soft cuddy-sprayhood too. 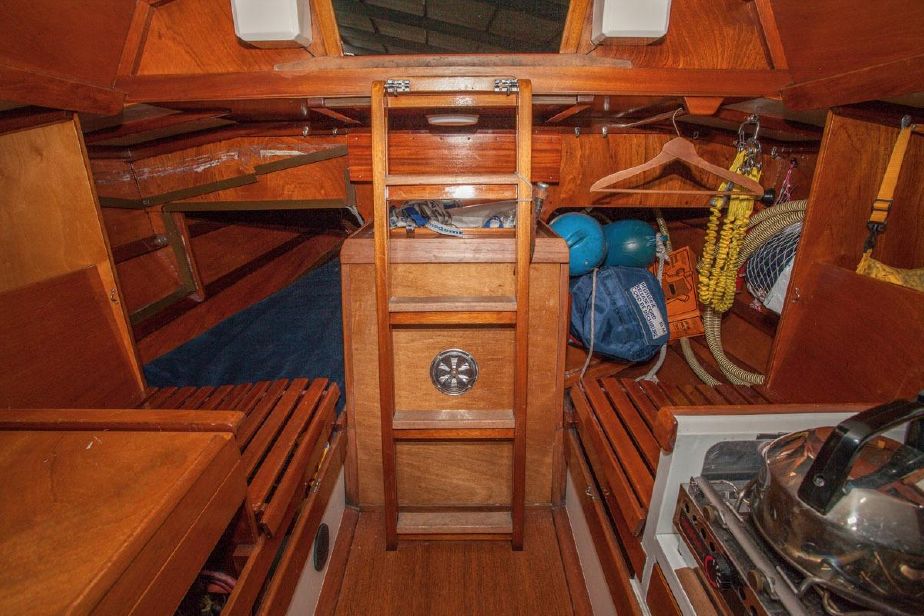 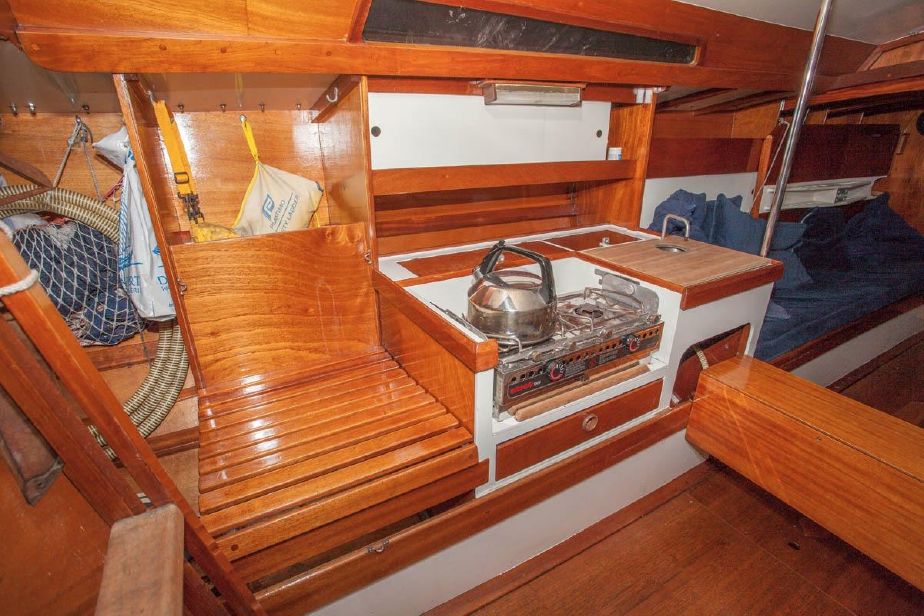 That interior style floats my boat in a big way although the boat itself wouldn’t work for me.

To continue my hunt for a project boat , and back to the little quarter-tonner i contacted the owner and ebay seller of the Waarschip 725 (Taurus) and had a chat with him about it. What with a back injury and not wanting to sit driving for 6 hours straight each way i cant get to see it but it looks as though this one has the ‘wrong’ keel configuration for my needs and is basically an IOR inspired shape like this : same as “Love in a mist”.

What i really need is this (and some legs)

Alan writes ”         I am watching, you write a good piece so worth reading, Yep that floats my boat and I have always liked varnished tree and white paint.
It would definitely go upwind a lift keel would complete the package.
N suggested one in ally, you can sail it back “

Peter Cash writes ”     Agree with Allen, but would make it a sliding gunter for short sticks and ease of mast raising. I could live with to few degrees lost to windward. My old 6 meter was a witch to wind but got out pointed by a mini tonner in medium airs. btw know you know another guy who owned a warship, a pic from 1983 of my wwll minesweeper is on my facebook page. That went ok to windward with a couple of big ol loco diesels.

I would love to see the minesweeper !, i guess that this boat is getting towards the fantasy boat that i will have built when i become an internet millionaire and you peasants can come and lick the varnish-work !. My version would definitely have the lifting keel or a very well drawn scheel-keel, cock-up rudder and maybe a square-top rig to bring the height down a bit, again a bit like gaff : slightly reduced windward performance but a gain in every other respect.

Peter Cash writes :        “Agree again, most new boats have interiors nicer than the owners homes. Buttoned white leather and velour not great for wet oilies on a bad night. My fav was our weeseal mk2, white panels with varished laminated deck beams and trim. My loves aqua so a few small panels add to the calmnesss of the interior. Wiped down with mold-away to restore the lustre.
Ease of rigging is vital for me, hence the gunter.

The interior of my Rocket 31 will be white paint and a few bits of varnish trim easy clean, the ends of the boat will be empty “keep the weight out of the ends !”
Most modern production boats are more concerned with how many heads and wine glasses they have, even the custom mid range have far to much stuff, the last build I was involved with was 70 ft but with the stuff of a 90 ft,the engine “cupboard” which in fact was full width under the main salon was so full we ended up double stacking equipment on hinged frames just to get it all in !!
The owner was not happy when I finally convinced him that the full hydraulic passerail would intrude on his master cabin so much the bed would be like a letter box slot, he really wanted one, The passerail that is !
Hence I will have a boat that sails properly not just an apartment in a marina.

Me : the blog post i am saving photographs for will just be on boat interiors : good ones, bad ones and ones that make you go “WTF” (was the designer thinking)